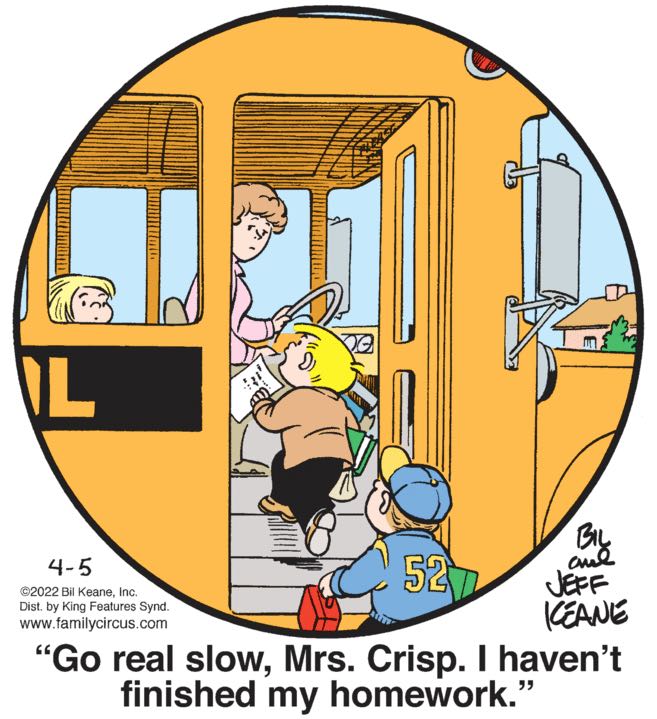 I’ve been doing this blog for many, many years and my attitude about many of the comics has evolved in ways I never expected, and one of the ways I least expected is that I have come to respect some of the subtle dry wit in the Family Circus. In today’s panel, for instance, Mrs. Crisp is giving Billy a semi-defeated “is this little moron shitting me” look, which, once you learn to recognize it, a surprising number adults use when interacting with the Keane Kids, including their parents.

Funky Winkerbean has accrued a truly epic amount of lore over its decades of existence, and I was about to apologize to you for not having it all at my fingertips, but you know what? It’s good and normal to not remember Funky Winkerbean plots from decades ago and I’m not apologizing for practicing self-care by refusing to retain information about them! Anyway, the last few weeks of this strip have been about Crazy Harry’s teen days as an arcade-based video gamer, and how his arch-rival was a person who wore a helmet and was known as “The Eliminator,” and that person turned out to be … the woman he would later marry. I have no idea if this was how the storyline actually played out way back in the early run in the strip or if it’s been retconned in a “What if a great video game player … were a girl, really makes you think” way, and I don’t care to do the research to find out. What’s important is that Crazy Harry has put on “The Eliminator”‘s helmet, and it’s apparently now some kind of VR/metaverse thing, only instead of taking you to a fantastic world beyond your imagination, it just plops you down right next to Les and Lisa’s special park bench, where you too can experience your wife dying of cancer in vivid 3-D.

Ah, it appears that “Coffyhead,” using the clever alias “Moka,” is about to tangle with Vitamin Flintheart’s manager “Coffee Grounds.” I usually find “Don’t talk to me till I’ve had my coffee!” jokes pretty dumb, but I’m beginning to think that the Dick Tracy creative team should in fact not talk to anyone or start working on Dick Tracy until they’ve had their coffee.

Oh, I’m sorry, are you still griping because the comic strip Rex Morgan, M.D., doesn’t do medical-themed storylines often enough for your taste? Well, they’re just going to spend weeks on the most boring injuries you can imagine until you beg for more stuff about “roots country” or whatever the fuck.