Look, obviously this blog is about 15% by volume me slamming on Funkyverse strips, so I’m just going to get ahead of things here and say that today’s strip is very, very funny, and the time-reverse gimmick is a good one that makes it funnier. Was it worthwhile spending 35 years writing the comic strip Crankshaft in such a way that we all hate him enough to get a genuine belly laugh watching him flee in terror from angry bees? Probably not, but in this moment, I appreciate it.

It’s extremely not new to remark on how much modern filmmaking is dominated by superhero franchises, but that doesn’t mean the syndicated newspaper comic strip Blondie can’t bring anything new to the table. In this case, it’s “late-middle-aged-and-older dudes find superheroes sexually threatening,” which I have to admit is new to me at least.

Oh, right, I had forgotten that the Moon People in Dick Tracy had to leave the Moon for some reason and relocate to an undisclosed location (that turns out to be Antarctica) and Dick pretended to care about his family so he could sniff out the answer to this puzzle, because he’s the world’s greatest detective and also an asshole. I was going to do a joke about him conquering Moon Valley, but he’s a cop, annexing territory isn’t really his bag. I guess he could arrest everyone for violating the Antarctic Treaty System, but enforcing international law isn’t really his bag either. 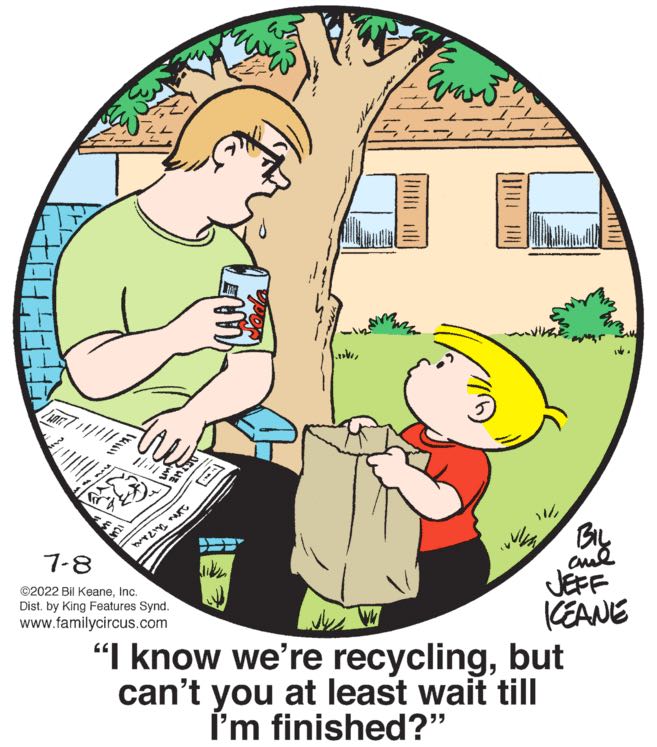 Gotta respect the thought process here, which was apparently, “Sure, we establish in dialogue that he’s still drinking his soda, but comics are a visual medium, we need to show that with a big disgusting blob of spit coming out of his mouth. Those grandmas who cut the panel out to hang on their fridge might not like it, but this one’s just for me.”