For America’s birthday, Dick Tracy is reminding us that only AMERICA has sent manned spacecraft to the moon, where they discovered that the moon was inhabited by Moon People, one of whom, in this classic storyline, eloped with his son and Dick chased them there and then he did the extremely American thing where he’s shocked, shocked to learn that other countries (or planets) also have immigration laws and they apply to Americans. If I were in prison on the moon, I personally would want it to be an electric prison, because I’m pretty sure you need electricity to generate the oxygen I need to live, but that’s just me. 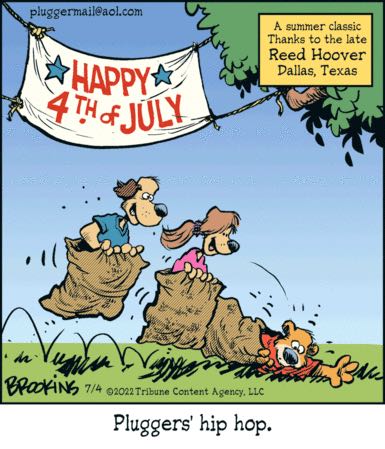 Sorry to get political on here on the Fourth of July, everybody! Don’t get too mad at me! Reed Hoover also got political by claiming that hip-hop, an American-born art form that is one of the U.S.’s most popular cultural exports, isn’t welcome at a plugger’s Independence Day celebration. You can get mad at him all you want, but sadly it won’t do you any good.

Beetle Bailey is here to remind us that like any ideology, patriotism and nationalism are shaped by material conditions. When urging the U.S. to ease starvation in post-WWII Germany, General Lucius Clay, head of the occupying forces, famously said, “There is no choice between being a communist on 1,500 calories a day and a believer in democracy on a thousand.” The quantities here have shifted somewhat, but the point stands. 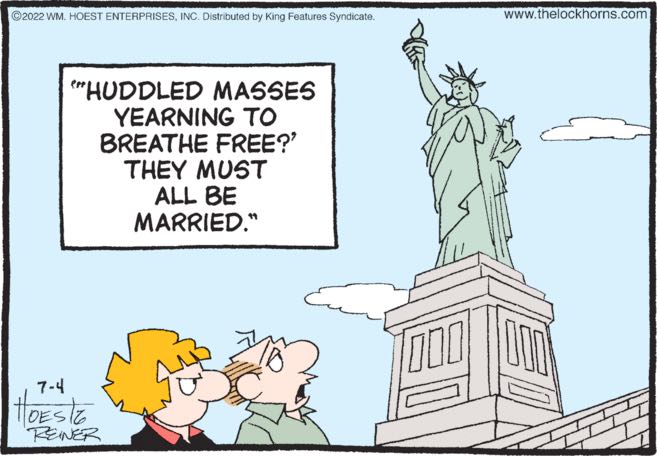 The Lockhorns, meanwhile, invert the classic aphorism and make the political personal, every day. There’s no room for ideology in Leroy and Loretta’s world: everything gets crushed into interpersonal misery by the intense gravitational field of their mutual loathing.