Say, were you feeling a little on edge rolling into our four-day week? Need your nerves soothed? Well, remember how beloved (?) ancillary Rex Morgan character Andrzej was about to die of a heart attack? Turns out he just had heartburn. False alarm! Ha ha! But it’s a false alarm that Rex can definitely still bill Medicare for, so all’s well that ends well.

A fun aspect of the baseball season Gil Thorp plot is it’s been all about comically blind Gregg Hamm and his media circus and we only hear in passing about how the other pitchers on the team are also doing great. Gregg (and these other, less interesting pitchers) got the team into the playdowns this year but, just in case that’s too much excitement for you: Gregg blew it and they lost in the first round. Whew! One less thing to worry about there!

I know I’m going against theme here but it may excite you to learn that some characters in Gasoline Alley are going to have some post-fireworks sex tonight. One of them is named “Boog.” Does that excite you? Or disgust you? Is disgust a kind of negative excitement? Much to think about. 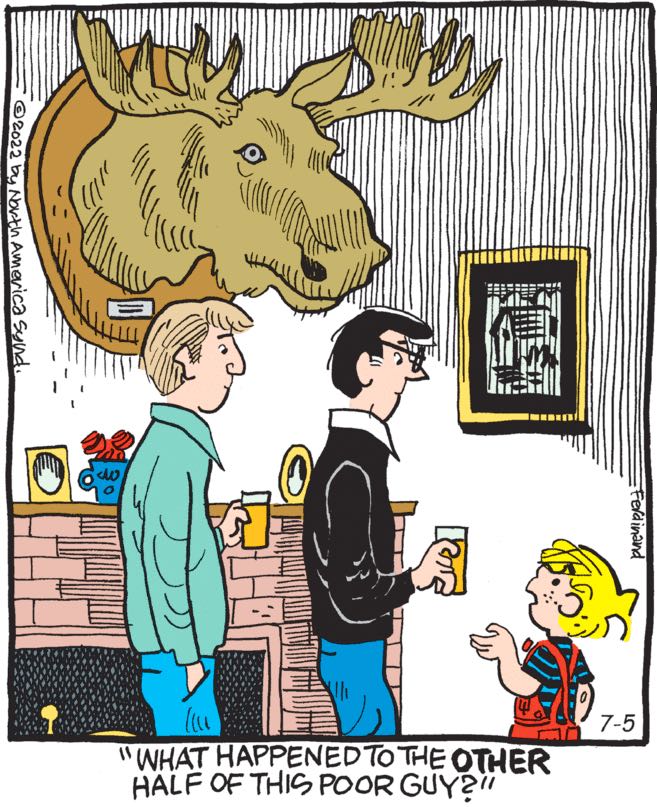 Damn, Dennis, one minute you’re humiliating your dad in front of tough guys by pointing out he’s insufficiently masculine, and the next you’re humiliating him while he’s trying to fit into a masculine milieu by pointing out traditional masculinity’s violent, toxic underpinnings. It’s almost like you don’t care one way another about society’s construction of gender roles and are willing to say whatever will most efficiently ruin your father’s attempts to make friends, which is truly the most nihilistically menacing move of all.

Wait, would Jess “like to see more” of Jared as a romantic interest … or as a medical caregiver? Wait, it’s both, you say? That seems extremely healthy all around. Please proceed!