Does anyone put a lot of energy into predicting how Gasoline Alley plots will get resolved? Like, no one does, right? Not even me? Well, let’s pretend we all do for the sake of this next joke, OK? [clears throat] Wow, I don’t think any of us had “Santa’s prayers were answered by a hot new she-elf showing up, causing Bunky to abandon his plans for an exciting, independent adventure and instead pledge another century of his eternal (?) life to serving Santa, due to horniness” on our Gasoline Alley plot resolution bingo card, which is a thing we all definitely maintain! 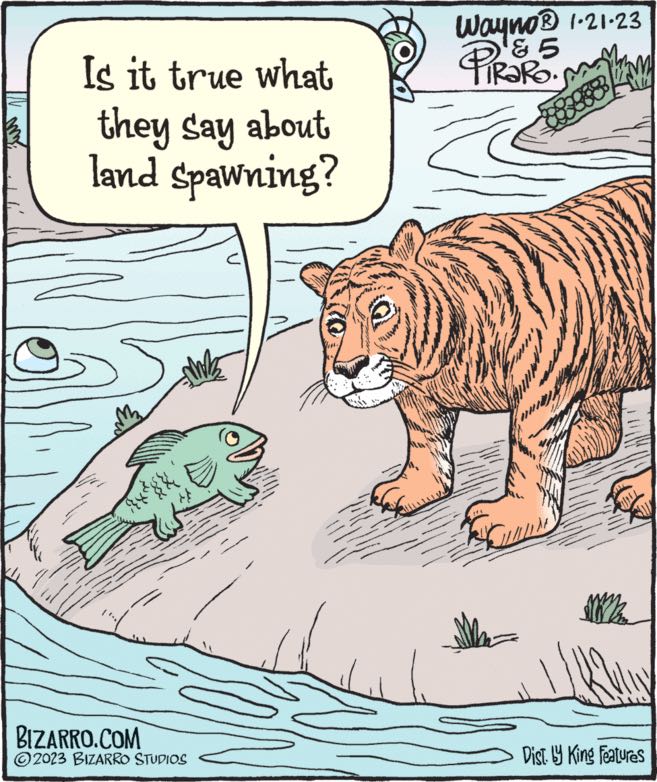 I guess Bizarro has finally figured out what it takes to get noticed on this blog, and it’s weird interspecies sex stuff. One thing I enjoy about this panel is that usually in gags where a fish has crawled up onto a barren shore, we’re supposed to imagine it representing the first vertebrate colonizing the land sometime in the late Devonian period, but here our brave fish encounters a tiger, meaning that at the very earliest we’re several hundred million years later in the Miocene. That fish isn’t an evolutionary pioneer or anything, it just wants to fuck a mammal.

I’m sorry, I think all of us have always assumed over years reading this strip that Sarge is functionally illiterate. This “joke” is not very good, and certainly not worth forcing me to completely restructure my idea of what Sarge is all about to accommodate the possibility that he can write a restaurant review! “But Josh,” you’re probably saying, “this is a one-off joke that will never be referenced again,” but sorry, it’s canon now and I have to update the wiki and everything, how dare they do this to me personally