It’s the Comics Curmudgeon 2019 Summer Fundraiser! Give lots; give often!

“Yes, but no, so let’s eat!” I call foul. Gil’s preseason chats with Marjie Ducey are supposed to detail the roster and telegraph the upcoming plotline. Cynical evasion, non sequiturs, and misdirection are for Marty Moon, dammit. Is Gil getting so lazy he can’t keep his own bullshit straight?

Whoa, looks like loss of blood is making our boy a little giddy; take on some fluids and maybe a Snickers? The Phantom has just rescued Imara Sahara here — wife of incarcerated terrorist Eric (The Nomad!) Sahara and mother of Heloise Walker’s best friend Kadia — from a very highly fortified and guarded compound during its annihilation by U.S. missiles, fighting his way through an army of unspecified allegiance to get her free, all to make good on Heloise’s idle boast, “My Dad will get your Mom out.”

BTW, Imara: if you compare notes with Kadia about the whole “Walker/Phantom” thing, don’t go expecting Bangalla Life and Casualty to take your calls.

But say, what if Imara, not Eric, is the real terrorist mastermind? Sure, they’d have to rejigger a few old plot threads, but wouldn’t it be just like the Ghost Who Condescends to miss a threat from across the aisle, just like he did with the Khagan in the Sunday series? And it would destabilize the family dynamics among the Walkers and Saharas, culminating in the daring rescue by 22nd Phantom Heloise of Kadia from a life of PTSD, self-medication, and pole dancing.

April’s story — her truth — is that an internal cabal of rogue CIA agents misled her into carrying out illegal hits, tried to kill her and her Dad Norton to cover up the mess, and got all massacred for their efforts. This has all been disclosed on-air in an exposé by reporter Toni Bowen, because April’s husband Randy can keep neither his pants nor his mouth shut. The story was elaborated further in Toni Bowen’s memoir about Norton’s corruption of literary lion Alan Parker, for which Parker has confessed and is now doing time.

So if you want to get out the rest of your story — your truth — April, I can think of a far better option than these two, and she’s doing the 6:00 news up in Cavelton.

It’s tough being a Doofus Dad, and Frank DeGroot has it worse than most. Walt Duncan gives as good as he gets, Dagwood Bumstead enjoys the genuine affection of an excellent cook, and Darryl MacPherson is the beneficiary of Wanda’s voracious sexual appetite and otherworldly lingual gymnastics. But Frank just hangs around the house being emasculated by Nancy and ignored by Luann. When he’s had enough, he wanders out to the mall to find a clerk his daughter’s age he can sneer at with no risk of backtalk. This kid told him about cross-trainers on Tuesday, but he’s so invested in his “so many shoes” Pluggers schtick it blows right by him. What I’m saying is fuck you, Frank.

It’s the 2018 Comics Curmudgeon Fall Fundraiser! Check out all the ways you can support this fine site!

Abby — a woman — longs to comfort her wounded child, but manly Sam has conditions, to make sure that Neddy’s mood is within permissible bounds, that her return is properly motivated, and that she won’t inconvenience him in any way. Let’s listen in:

“OK, Sam, it’s time for The Talk again — pull up there by the gate. See what it says up there, in bronze on granite? ‘Spencer Farms’ — Spencer. I’m wealthy; Neddy and Sophie have their own inheritances, what have you got? Shut up, I’ll tell you — you’ve got the leftover from the shoe deal with Jules because of Neddy, the commissions on the factory deal with Rocky because of Neddy, and the profit on selling the bus to Hank because of Neddy. You’re at least enough of a lawyer to understand how our prenup works, and how you got your clothing allowance, your Pinot stash, and this stupid car. So go back to your “office” over the stable, do your “work,” and stay the hell out of my way: I’m going to go take care of my daughter.”

Before Hi and Lois changed artists, a horizontal line and two dots meant “bedroom eyes”; now it means something like “I am being sly,” and they’re using it a lot more. Kinda creeps me out, children having all that sex on the sly.

It’s been five years since Josh announced his break from Luann, and despite a relapse or two it falls to me to see that this popular hateread gets the coverage it deserves. It’s a tough gig — how do you cover developments in a strip with the core principle “Nothing must ever happen?”

One way is to play stupid “what if” games. My favorite is, “What if all the designated villains were designated heros, and vice versa?” Gunther as a passive-aggressive weasel trying to sneak his way into Luann’s pants is a gimme, and Ma Gunther as his manipulative older double trying to sneak her way into Mr. Grey’s wallet isn’t much harder. Leslie (“It’s Les“) Knox is more of a challenge: I see him as the tough-but-fair drill sergeant trying to shape Gunther into something that will pass for a man. Sort of a “TJ and Brad” thing.

Hey, it’s Gil Thorp wrapup time, with Marjie Ducey! And if there’s a more callous, dismissive line of Gil Thorp B.S. than panel three there, I don’t ever want to hear it: “Kid gives me four years, to do what for him? Sometimes you just don’t like a kid, stuff happens, it is what it is! Things change; everything works out — for me anyway. Is that all? I gotta get home and grab some of that Pinot before Mimi drains the box.”

This sets up the exact inverse of “Curtis is Humiliated Trying on Clothes”, and works just as well.

[The old-school draftsmanship in Zits — like Sherman’s Lagoon, Curtis, and Gasoline Alley — is usually impeccable. That’s why the missing corner of that banner in panel one sticks out: “SALF”?]

I know both Josh and I go on about the wads of exposition in this strip: characters (“your father, John Darling”) are constantly reintroduced, events (“the coming reunion”) explained with every mention, and whole backstories laboriously introduced to set up … not much. Maybe the creators are trying to make the strip accessible to casual readers who don’t see it every day? Maybe they don’t realize they’re punishing people for paying attention?

Anyway, if you’re gonna expose, expose right: Eisner is justly famous for his comic books; his early, obscure strips all flamed out before 1939. And San Diego weather is delightful.

Gunther’s not at all upset by the idea of his mother as a person independent from himself, with feelings and desires of her own. He just can’t shake the image of Mr. Gray in a leather mask, twirling a leopard-print Speedo over his head and hollering “COWABUNGA”! 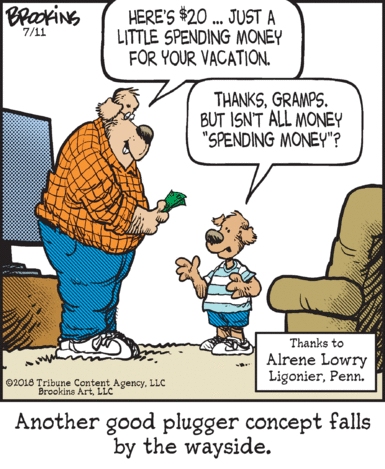 “I learned that from you, Boomer scum!”

Aaaaand that’s it for me, folks! Thank you for a lovely time, and for your generosity during the fundraiser. You guys are first-rate human beings and should all cut yourselves some extra slack today; tell ’em Carl told you so.

Josh will be back tomorrow with songs of the Auvergne, profuse thanks, and his usual slantwise take on comics of the day.