Happy New Year, everybody! How was your Chrismakkuhzatice? I got me a bunch of real nice presents, both comics-related (Complete Calvin and Hobbes

, In the Shadow of No Towers

) and otherwise. Meanwhile, of course, the various comics have marched on in their merry ways. There was some Christmas cheer:

At Christmas dinner, Judge Parker’s Sam Driver felt a need to not only help cook but to dress up as a chef for some odd reason. Is that a cravat he’s wearing? Or is it the front of a cape? Is he supposed to be “Chef Man”?

Gil Thorp took Christmas day as an opportunity show off both his freakish family (I think his son played Steve Austin’s boss in the Six Million Dollar Man) and his ability to speak in cursive. 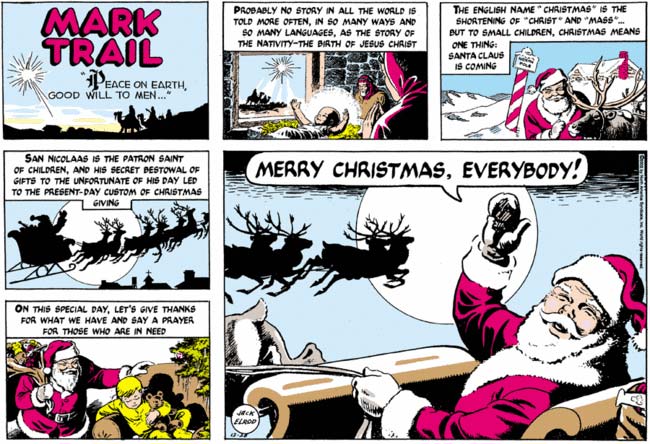 And Mark Trail got to show off just which side of the War on Christmas he’s on. Notice that Jesus gets glossed over in the opening panels (which many newspapers don’t even print) so as to give more space to Santa, the gift-giving pagan nature-spirit amalgam who has supplanted our Lord and Savior in the greedy, greedy hearts of America’s children. At least we don’t have to stare at any more reindeer ass.

Not everyone took time off for the holidays, either:

Apartment 3-G’s Lu Ann cheered us all up with the most revealing outfit in the history of Apartment 3-G. Her little black dress makes Tommie’s clashing-greens golf shirt/sweatshirt combo look even more like something out of the late Victorian age.

In Spider-Man, some suicidal schmuck has decided that offing himself in Spidey’s accidentally discarded costume would be good for a larf. His worries about being “corny” are clearly misplaced, as this comic is a nonstop cavalcade of cheese. 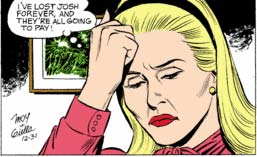 Mary Worth’s Jane ex-Hand has instantly aged twenty years in deciding to instigate the most ludicrous tort case in the history of common law. Her case against “Ask Wendy” will no doubt be soon followed by cases brought against syndicated horoscope writers for failing to predict disaster and against Omar Sharif for shoddy bridge advice. 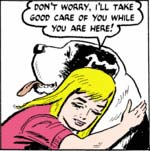 Anyway, hopefully this little catch-up whets your appetite for all things comical and curmudgeonly in 2006. Many people take milestones like the end of the year to re-evaluate their creative endeavors, or take their pet projects to the next level. Well, I have absolutely no big plans or surprises for you in the new year. You’ll get more of the same and you’ll like it! Well, there’s one exception: I hearby declare the end of “First Post.” Seriously. Put a comment on this site that serves no purpose but to indicate that you posted first and it will be purged forevermore by me. You have been warned! Josh has spoken!