Ye cats, while I was busy soaking in the sun and eating large quantities of grilled meat, this weekend’s comics were plugging along providing rich fodder for hilariousness. Let’s jump to them with no further ado!

Holy cow, it’s, like, the least subtle foreshadowing in the history of foreshadowing. You know what I think would be great? If this is, in fact, the last we see of April Bower. Not because I have anything against her, I just think it would be great if that smug bastard Sam’s prediction didn’t pan out.

I wonder about Sam’s pose in the last panel. Maybe all this talk of lawyer-on-secretary action, combined with Gloria’s sexy, sexy Judy The Time-Life Operator look, has convinced Sam to “take a dip in the office pool,” if you know what I mean. In panel three, he’s flashing her his expensive watch, as if to say, “This is the sort of bauble that could be yours if you agree to be my on-the-side woman.” By Gloria’s pinched facial expression in panel two, though, it seems that she can’t get past the disgusting thicket of hair on the back of his hands. 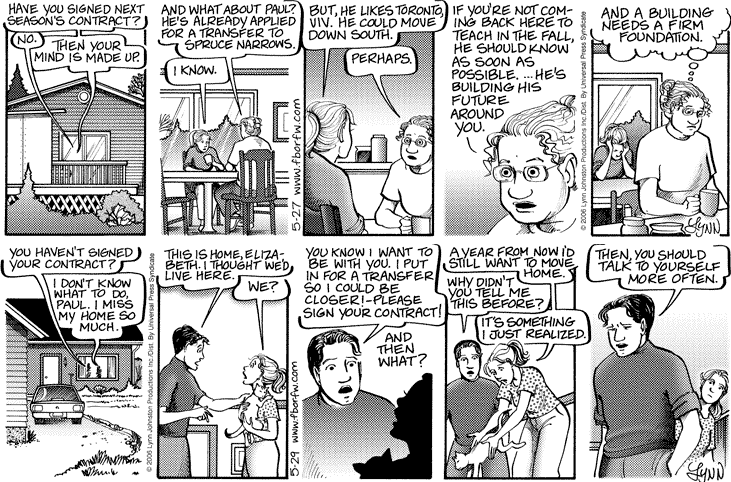 Man, say what you will about FBOFW, but these strips show that it can still deliver. Specifically, it can deliver what I for one have been waiting for, which is Liz getting seriously called on her whiny suburban white girl shit. Take a look at the broad shoulders and quiet dignity of Canada’s Finest there, Lizardbreath: a year and a half from now, when the Spawn of ThÃ©rÃ¨se is throwing yet another temper tantrum and your mom is there offering unsolicited advice while Anthony is down at Gordo’s Car Emporium yukking it up as he fills his mustache with cinnamon bun crumbs, you’ll be thinking of Mr. Wright as you say “Wait! Did I really miss this? ‘Cause now I’m not sure!”

(Um. That last paragraph revealed both more in-depth knowledge of and more emotional investment in this strip than I frankly was aware that I harbored. Ratchet back, Josh, ratchet back.) 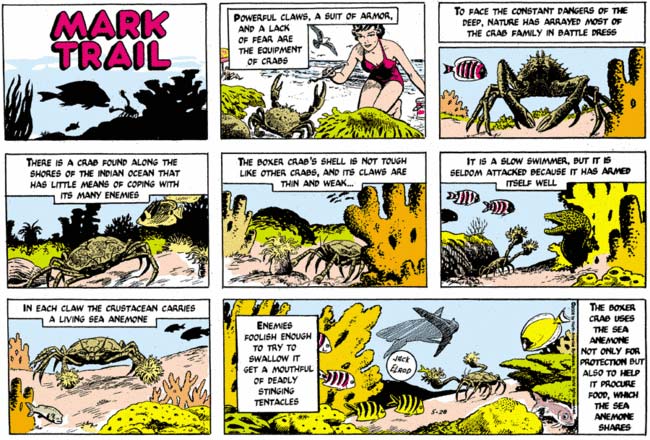 Damn, that lady in panel two’s gonna get crabs! Or, um, a crab. Heh. Crabs. I don’t have much to say about this strip, except that it’s one of the better “Mark Trail Teaches You About Nature” installments to come down the pike in quite a while. The sexy-lady-pokes-at-an-enraged-crab-with-a-stick action in the second panel is awesome, of course, as is the notion that crabs walk around weilding sea anemones as weapons. I have no idea if that’s true, but even if it isn’t, it’s one of those things that is so awesome, that if it isn’t true, it should be. 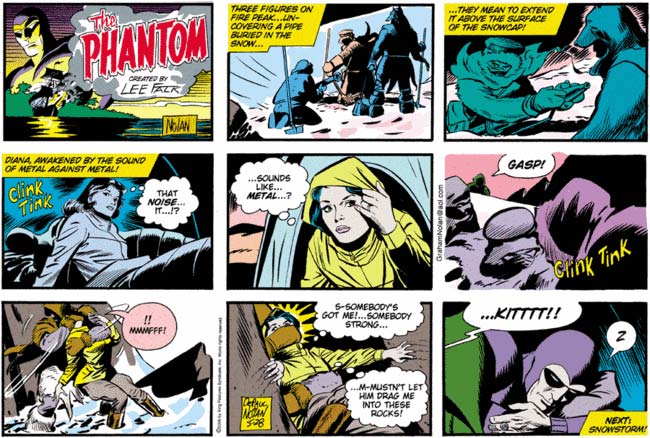 Meanwhile, the Ghost-Who-Sleeps-Through-His-Wife’s-Kidnapping is, well, sleeping through his wife’s kidnapping. I’m puzzled by Diana’s cry for help in the last panel: I’m reasonably sure how you’d pronounce, say, “KIIIIIIT!!” But “KITTTT!!“? That’s a lot of Ts. 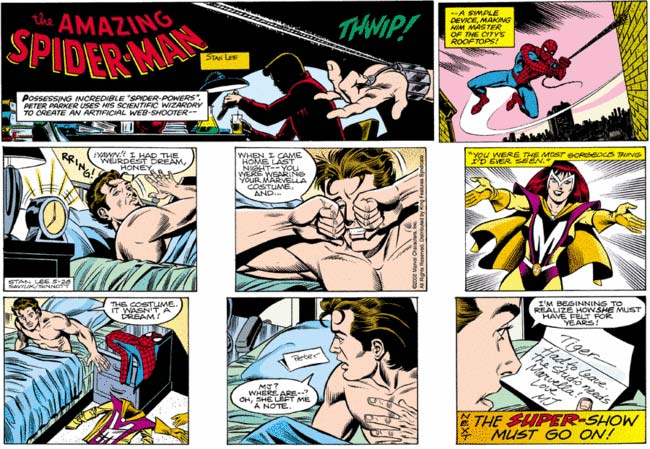 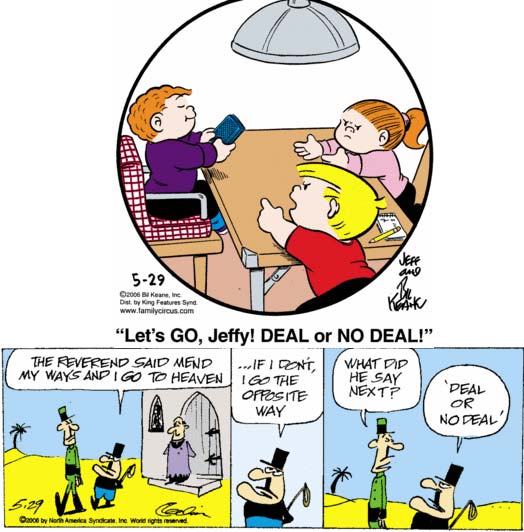 It’s the Battle of the Clumsily Deployed Catchphrases of the Moment! And the surprise winner is the Family Circus. Yes, the joke is lame and will be incomprehensible to anyone reading it 18 months from now, but there’s a certain charming pathos to it: Billy and Dolly glare at Jeffy with angry, piggish faces and jab at him with their fingers, while their little brother, with a tiny bit of control over his environment for once in his life, just closes his eyes, smiles slightly, and enjoys the moment. Crock, on the other hand, is Crock, and therefore sucks.

Do you know why Slick Smitty has that big, self-assured grin on his face? Because he knows that, since he’s a human, a court run by animals has no legal jurisdiction over him. He may be guilty as sin, but he knows that half an hour after the verdict comes down, the court sketch artist will have his neck broken in a snap track and the prosecutor will be turned into a nice muff for his wife. For the sake of justice, we’d all better hope that the judge is a member of an endangered species.

And we’re right back where we started … or are we? Yes, today Judge Parker got a new artist — a new artist who has outfitted cult leader Mimi with the cutest paisley vest ever! Randy still looks like a tool, though that’s really unavoidable; at least he doesn’t look like a tool with a face like a monkey. The real test will come when two of the male characters are put in the frame at the same time; will we be able to tell them apart? Still, I for one am happy to offer a provisionally warm welcome to you, “Barreto,” whoever you are.