WOO-HOO, ALAN’S BEATNIK BUDDY IS BACK! If you don’t remember this bad-news countercultural type, check out his first appearance, from more than a year ago. Crazy kick! I don’t know if we knew before today that his name was “Jones,” though. I wonder if this fellow is actually the Archie gang’s resident nonconformist, Jughead Jones, all grown up, who’s traded his first name and his felt crown for a soul patch and a gig dealing weed (“good”) and smack (“bad”).

I was going to write a screed about how if you weren’t a dedicated Momma reader, you wouldn’t get the “joke” of today’s strip, which is that Francis doesn’t really have a steady job and so “getting up and going to work” probably means putting in applications or working at one of his various menial but otherwise not particularly stressful jobs and that based on the level of dishevelment in his hovel, you might assume that he did literally work in a salt mine, albeit one with complimentary wake-up calls, and that furthermore this meant that nobody would get the “joke” in today’s Momma because there was no such thing as a dedicated Momma reader, but then I realized that I was a dedicated Momma reader and that I got the “joke” (keeping in mind that “getting” is not the same as “being amused by”). Then I was sad.

Good news, everyone! Hugh’s conscious and his histrionics levels are back to normal!

All right, Judge Parker, you’ve been waving those things around all week trying to get my attention, so here it is: boobs. BOOBS. Boobs boobily boobs boob. BOOBS. Are you happy now?

Speaking of boobs: You’d think that Sam, who’s been through a lot with Mark, would take the lead in thanking him for his help in saving this small-town airport, which help mostly took the form of violence and threats of the same, but it’s her dad who’s doing all the jawing here. Still, in panel three it does sort of appear that she’s about to thank him … visually.

And now, a little something for the ladies…

Legitimate questions were raised about whether yesterday’s crotchtastic Gil Thorp was really as crotchy as all that, or if it was perhaps just the view through Bill Ritter’s boxing gloves. There’s really no doubt today, though. No, sir. That’s quite the crotch shot. Yep.

By the way, if Bill were holding a pack of cigarettes and wearing chaps, panel three would look uncannily like an enormous Marlboro billboard that loomed a mere two blocks from my high school when I was a kid, I swear to God. 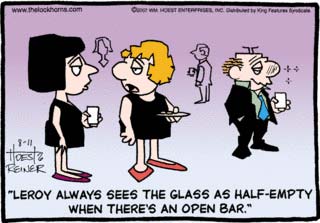 Ha! It’s funny because Leroy has a crippling problem with alcohol! Funny!

Ha! It’s funny because General Halftrack has a crippling problem with alcohol, and is so drunk that he’s managed to intoxicate his golf ball, in defiance of all the laws of biology and physics! Funny!