Oh, look, it’s Earth Day, and once again many comics are awkwardly leaping on the environmental bandwagon! Let’s check out the oddest strips:

Ha ha, it’s funny because “earth” can mean the planet or dirt, and also because Zero is stupid! Of course, this is infinitely preferable to another tree-fucking strip.

You might think it’s kind of weird that Mrs. The Phantom has a special Earth Day briefcase that she just happens to have prominently displayed on the day that she will parachute onto a cargo ship bearing her family and a bunch of lizard men. (If you’re not following this strip, she’s doing this to keep the ship’s sexy lady captain from putting the moves on her spandex-clad husband, FYI.) But since she works for the UN, and the whole environmental movement is just a cover for the brewing one-world-government conspiracy, it all makes perfect sense that she’d be required by her job to tote propaganda around with her at all times.

You have to hand it to Spider-Man (the comic strip) for constantly working on new and innovative ways of making Spider-Man (the character) completely unlikeable. The buffoonish, semi-competent Electro has been given one, and only one, redeeming characteristic: his sincere love for his son. So naturally Spider-Man is using this fatherly affection to entrap him, keeping it foregrounded in the story and making Electro seem more sympathetic; as if realizing that this is the case, Spidey apparently has decided to just go all out with the dickery and make some cheesy joke about Earth Day while the villain desperately tries to break free to find his injured child. Naturally, Spider-Man cares not a whit for the environment: to generate all the electricity that his unceasing television-viewing requires, whole West Virginia mountains must be leveled to extract the precious coal within.

Meanwhile, these three strips are here to show us the true meaning of Earth Day, which is that children of all races are filthy, disgusting monsters.

Speaking of filthy and disgusting, in non-Earth Day news, today’s Funky Winkerbean features one character telling another about vomiting, and, as a “punchline,” the second character recoils in disgust. Funky Winkerbean, ladies and gentlemen! 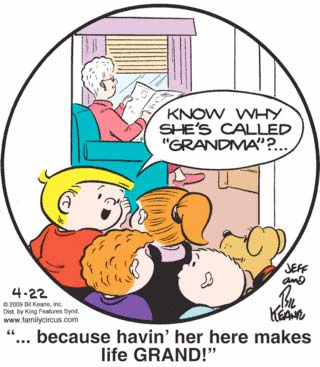 Yup, she sure is making life grand! By sitting there in the living room, quietly reading the newspaper. While the kids gather in the doorway, watching her, enraptured. Seriously, this family creeps me out so God-damned much.