Welcome back, everybody! Did you enjoy your holiday week off? I did, but as ever I must submit to the siren song of the comics! How did our favorite characters spend the week?

Well, over at Apartment 3-G, Lu Ann realized with a sinking feeling that she never should have trampily exposed that shoulder if she expected to win the heart of his altar boy. Would she just burst into flames if she entered Paul’s church? Better not risk it!

Also, just FYI, never, ever speak ill of Margo’s building if you want to live.

Curtis’s annual Kwanztraavaganza is featuring less insane hallucinogenic ancient African magic and more depressing modern American unemployment, which is a bummer. But at least the protagonist has a horrifying jawless lamprey-dog as a pet. That counts for something, right? 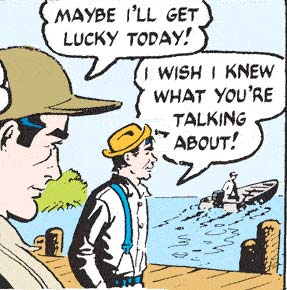 Over in Mark Trail, our hero seems to be learning about this thing called “flirting.”

And in Funky Winkerbean, Les’s two ladies finally realized that he’s in love with a dead woman, and now they will give up their fruitless and baffling pursuit of him. (Ha ha, just kidding, they still want to sex him up for reasons no sane person could ever comprehend.)

2011 brought us not one but two wonderful weddings: one solemnized under the watchful glower of Mary Worth, and one made more festive by an endless river of silent, inhuman monsters. Happy New Year, everybody! The bestial fiends of Subterranea are coming to devour you! 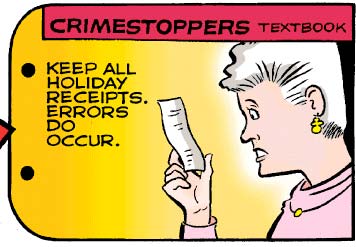 Back on the surface, Dick Tracy’s Crimestoppers Textbook seems to be really, really reaching for crimes to stop.