On the Comics Curmudgeon’s 8th blogiversary, I have a couple of quick notes on my planned novel. First, THANK YOU! My Kickstarter reached its goal in the first 24 hours it was up, and has already raised much more money than any fundraiser I’ve ever done. The book will still be better — better edited, better designed, and better written — if I get more pre-orders, and you get a more physically pleasing version of the book if you pre-order, so please do check it out.

Second, you might note that some of the high-end rewards I’ve offered involve me travelling to your home town to participate in a book party. These look pricey, but aren’t so much if you split the costs among many party guests! If you’re interested in hosting, email me and tell me where you live, and I’ll try to connect you with others nearby.

Mr. Dithers is violating any number of employee protection laws, but it’s almost certainly worth it.

Sorry, Rex, Iris hasn’t understood a word you said since she heard the telltale sound of a corkscrew opening, because she’s been so very focused on staring intently at the delicious, delicious wine.

When Luann’s mom was a teen, “heavy face time” was the name for a deadly plague that caused people’s faces to fill with pus and swell up painfully, so you can understand why she looks so upset.

I feel bad for constantly making fun of General Halftrack’s alcoholism and erratic behavior now that I know that he suffers from terrible PTSD. 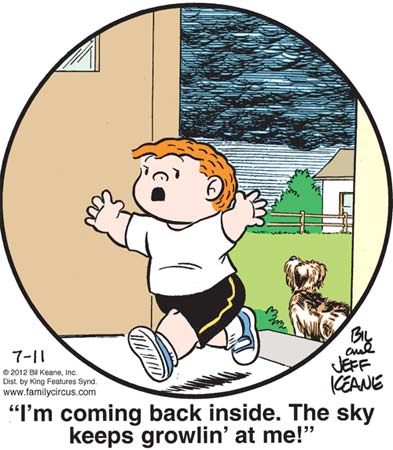 Sam the dog looks beseechingly at the sky, wondering why the ancient Thunder God gave Jeffy enough warning to successfully escape the terrible electric death prepared for him.

Herb’s attempts to live out his philosophy of non-violence as a youth failed to make him a better person, and instead have left him a bitter, frustrated adult, consumed by thoughts of revenge.

This nice scientist has grown a baby in a lab, raising any number of disturbing ethical questions.

Someone gave Marmaduke a bag of corn chips.