You guys. You guys. This is amazing. Before he was defeated in combat by Mark Trail, Jeff buried the precious Indian artifacts he stole outside the cabin, and is now refusing to tell Mark where they’re hidden. They’ll be lost forever, right? Oh, but wait. Remember this completely delightful panel from last month? 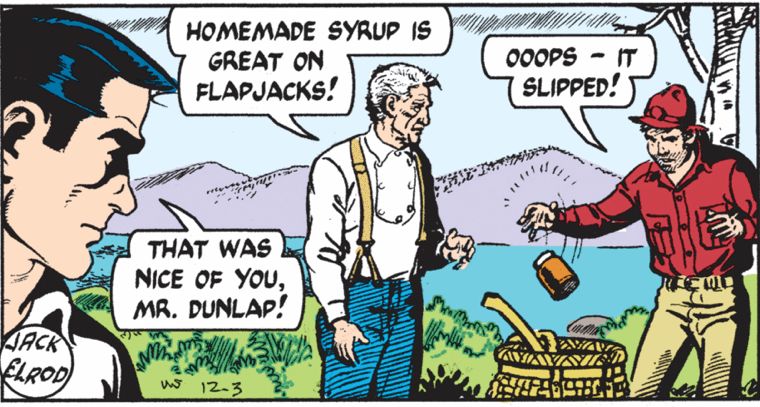 Well, guess what: by dropping that jar of homemade syrup into the artifact-basket, Jared inadvertently made this stolen haul irresistible to bears. This is one of the greatest delayed payoffs in Mark Trail history. Soon the artifacts will be back in their rightful place, in the museum Mr. Dunlap intended to donate them to, and only slightly worse for wear for being covered in rancid syrup and torn to bits by the claws of a hungry bear.

I have been remiss in pointing out that 2014 has brought a new artist to Rex Morgan, M.D. Graham Nolan, who is getting a nice tribute in cereal form here, has handed duties off to Terry Beatty, who succeeded Nolan on the Sunday Phantom a while ago. Check out Beatty’s blog for more on his process — it’s pretty interesting!

The new artist is using his own style without really changing any of the character designs that much. I’m glad, for instance, that Sarah remains weird little gnome-person. I’m pretty in love with her facial expression in panel three here, as it seems appropriate for someone who really wanted to rat out her baby-sitter but eventually agreed not to in exchange for a cookie bribe, but now her mother’s asking her a direct question and you can’t lie to your mother, can you? So she’ll just have to tell on Kelly, even though she already ate the cookies! It’s like Christmas never ended!

Three cheers for Apartment 3-G for remembering Lu Ann’s tragic artist/drug addict/drug dealer boyfriend Alan, who got shot and killed, over drugs. You may wish to peruse my archive to catch up on the Alan plotline in all its glory, but at minimum you should Never Forget the following high points: Jones the beatnik drug dealer, “Wow. This dope is super — I feel great!”, “This better work. I just spent most of my paycheck on drugs!”, “And, face it, getting high is all I care about”, and “I’ll calm down when I get some drugs!! Please! I hurt so bad!!”.

“Still, Santa Royale is such a stuffy, hidebound place. It’s the sort of town where people frown on you just because you use an area rug as a napkin! New York is so liberating, where I can be exactly who I want to be, with no limits!” 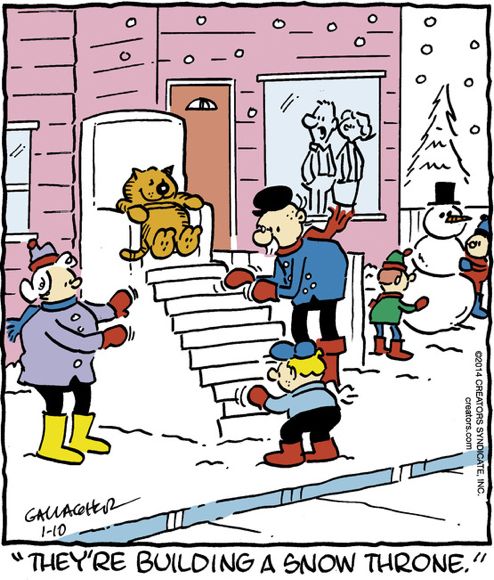 Meanwhile, Heathcliff’s demands to be worshiped as a terrible God-King continue unabated.