A true artist can take a hacky, overdone concept and still manage to bend it to the service of their larger project. In the case of Funky Winkerbean, that hacky concept is “ha ha, exercise sure is difficult if you’re old and out of shape,” and that project, to which the strip is totally committed, is injecting a dose of soul-wrenching ennui into the funny pages each and every day of the week. What could’ve been just another joke about a guy whose medically mandated time on the treadmill takes longer than he’d like becomes a metaphor for life as an unwinnable race, run in sweaty silence and solitude, increasingly exhausting and yet not moving you forward a single inch. You guys are looking at the work of a master here, and I hope you appreciate it.

Call me a speciesist if you must, but I usually have a hard time summoning up anything but sympathy for Slick Smitty as he occasionally violates the laws of an animal-run polity he neither understands nor respects. Here he is, with his hands terribly injured — probably he made an ill-advised attempt at offering a human-style handshake greeting to some sapient beast with sharp, unretractable claws on its forepaws — and he’s been put up in what’s essentially, let’s face it, a veterinary hospital. So sure, he wandered up the corridors, no doubt reeking of animal urine, found a basket of apples, and, yeah, he took one or two, carefully cradling them in his bandaged hands so as not to exacerbate the pain in his lacerated palms. There was some goat nearby, bleating, but, whatever, there were lots of apples in that basket. There were more apples where those came from. Do you know who first cultivated apples? Do you know who saw a tiny, sour wild fruit, growing on trees on the slopes of a Central Asian mountain range, and realized that, with patience and generations of selective breeding, eventually you’d have something juicy and succulent and sweet, growing on acre after acre of carefully tended trees? It sure wasn’t fucking goats, I’ll tell you that much.

“Battle fatigue” is an archaic term for the collective symptoms and psychological reactions to the horrors of combat that we now refer to as a variety of post-traumatic stress disorder. So, even though Hagar spends his days burning and looting villages and murdering and enslaving the innocent, know that he wakes up every night covered in sweat and has intrusive, debilitating thoughts about the awful violence he’s seen. Centuries before the advent of the mental health profession, his only recourse is to drown his sorrows with alcohol and share his feelings with another man whose chosen profession involves endless, endless gore and horror.

We’ve been having fun for weeks now making fun of the pink Ann Taylor Loft turtleneck sweater that Tommie’s been wearing nonstop ever since she got to Jack’s large animal vet practice/cult compound, but I think this is the first time we’ve seen that she’s also been wearing white pants? This is basically the perfect outfit in which to shovel horse poop all day.

In more proof that Luann seems determined to actually change things up and send its cast to college next year, it seems that beloved Pitts English teacher Mr. Fogarty will be retiring! Would you like to enjoy some more hilarious Fogarty Flashbacks™? Well, you’re going to have to check them out on the Web at LuannComic dot com, because they’re just too hot for newspapers. 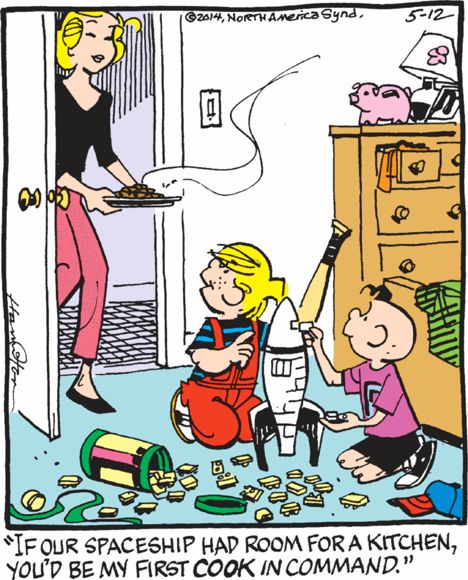 It’s too bad Dennis’s spaceship doesn’t have room for a kitchen, because probably he’s going to starve to death on about day six of his mission.