Oh, snap, did our man Jordan steal some valor? We learned yesterday that he lost his legs to an IED in Iraq not while “on patrol,” since he wasn’t in a combat unit, but rather while he was walking to a market to buy vegetables, because he was an Army Food Services Specialist. You’d think most people would be perfectly willing to honor anyone wounded by enemy action in a combat zone, and that the soldiers he fed would’ve deemed him a hero for risking his life to help supply them with fresh food and not MREs or industrial flash-frozen meals shipped from the States. But, whatever, Jordan just wants to give people a “good story,” and it makes me suspicious that the truth is even further removed from the “real” tale he’s been telling his fiance. Like, in a month we’re going to find out he wasn’t in the army at all, but actually was just a line chef at a restaurant who had to run to the supermarket to get some more spinach during the late dinner rush, and accidentally slipped and fell into the into the industrial floor buffer. Then a week after that we’ll find out the restaurant was an Olive Garden and he was actually picking up more of the Secret Olive Garden Ingredient (Grade B butter).

I don’t want to tell Mary how to do her job (“job”), but if you’re trying to woo an emotionally closed-off shut-in back into the world by giving him a specific task to complete that matches his skills, maybe just spend some time with him doing that task and making neutral chit-chat instead of bombarding him with feelings talk the moment you trick him out of his apartment? This is the speech for when he realizes he’s enjoyed the day in spite of himself, not when he’s still in the car on the way over! He’s not going to come out again for another year.

One thing I really hate is characters explaining things to each other that they already know, so I’m going to assume that the vampiress on the left has only recently been turned into an undead ghoul by the vampiress on the right. Our newbie has finally gotten over the initial shock and is starting to really lean into the aesthetic, but still hasn’t really that the one thing that’s truly her long hoped for ticket to Instagram stardom is also the one thing that makes selfies physically impossible. 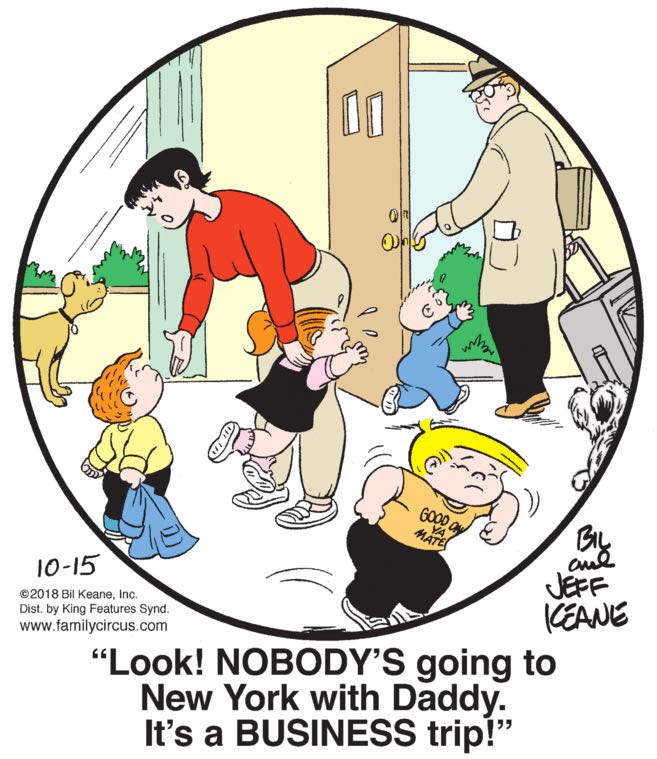 My favorite part of this cartoon, in which literally everybody is devastated at not being able to go on a trip to New York with Big Daddy Keane (which, why? he isn’t that great) is that Billy is wearing a “Good On Ya Mate” t-shirt he got from his canonically Australian mother. Ha ha, Billy doesn’t know the difference between New York and Australia! The only geography he understands is “here” and “somewhere else.” He’s a moron!

I’m not sure why Slylock felt like he needed so many accomplices for his grim little sting operation here. I do love how pleased Patty looks — maybe she feels like, having gotten a social invitation from Slylock, she’s moving up in the world! — and how tense everyone else looks, as they all wait for this desperate addict to sneak off to the bathroom, open the medicine cabinet, and try to pocket the, uh, “toothpaste,” yeah, that’s exactly what Patty’s been stealing from the town’s medicine cabinets, toothpaste. Only our li’l pig pal is completely ignoring the fraught emotional texture of the evening. He’s just eatin’ dinner! He loves dinner! It’s weird that dinner’s been served in the living room off of a coffee table, but guess what: he doesn’t care!

“Look who escaped the chopper via their own personal jetpacks!” “Kingpin and the Golden Claw!” “Yeah man, that was a rhetorical question. They were the only other people in the chopper. It couldn’t have been anyone else. Is this … is this how other people feel when they’re talking to me? Hoo boy.”