Welp, the softball team failure to advance in the playoffs went, as predicted, largely unnoticed (especially on this blog, heyooo) and now we’re onto a summer storyline! For those of you too young to remember, summer in Gil Thorp used to be a time when anything could happen, when the strip was freed from the rhythms of the school athletics calendar and could explore truly zany scenarios (e.g., “Coach Kaz, Rock and Roll Bodyguard,” “The Day Marty Moon Got Grifted At Golf,” “Gil Wrestles A Man With Dementia, For Charity“). But lately we’ve just had to endure Gil half-assing it even more than usual as a golf coach, with only the occasional Beloved Character From The Past returning to liven things up. And this year we’re getting a second-order Beloved Character From The Past: Jaquan, a pro basketball player who improbably tagged along for a trip back to Milford two summers ago with his personal trainer, Mudlark alum Trey Davis, and whose mid-career ennui was cured with the suggestion that he get a master’s degree in history. And folks, I’m allowed to say this because I have a master’s degree in history: I assume he’s returned to town to have his awful revenge on everyone who allowed him to make such a terrible decision, because getting a master’s degree in history sucks and carries literally no advantages whatsoever.

Dick Tracy just jettisoned its vaguely exciting tale of Little Orphan Annie being kidnapped mid-week and instead demands that we pay close attention to this scene: a faceless, cigar-smoking man surrounded by a cloud of flies sings a little tune about banana bread and admonishes a yokel for gawping at his late uncle’s vast library. If you’ve read this blog for any length of time, it probably won’t come as a huge shock that I find this much more interesting than a little light orphan-napping. 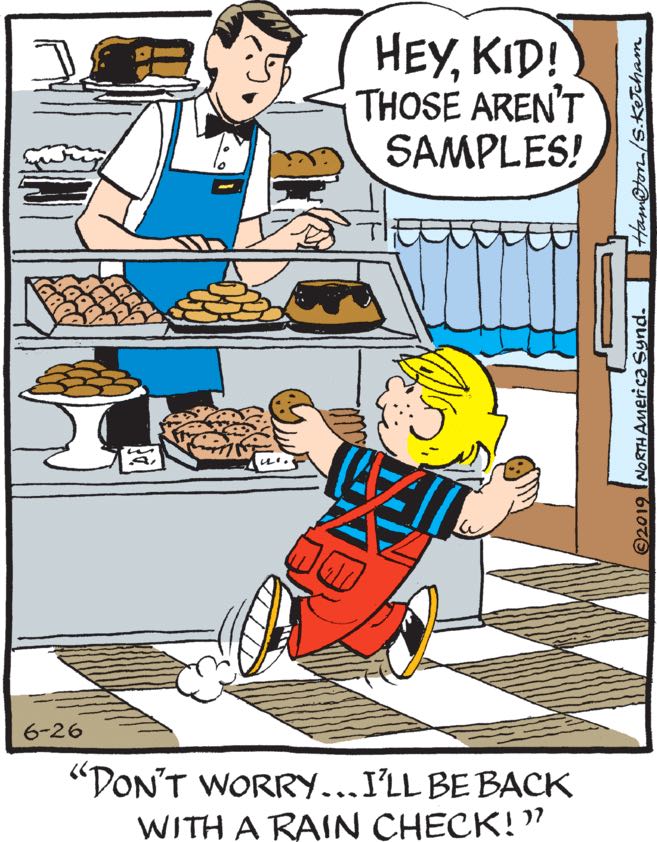 So Dennis is just straight up stealing stuff now? Even I have to admit that that’s reasonably menacing.