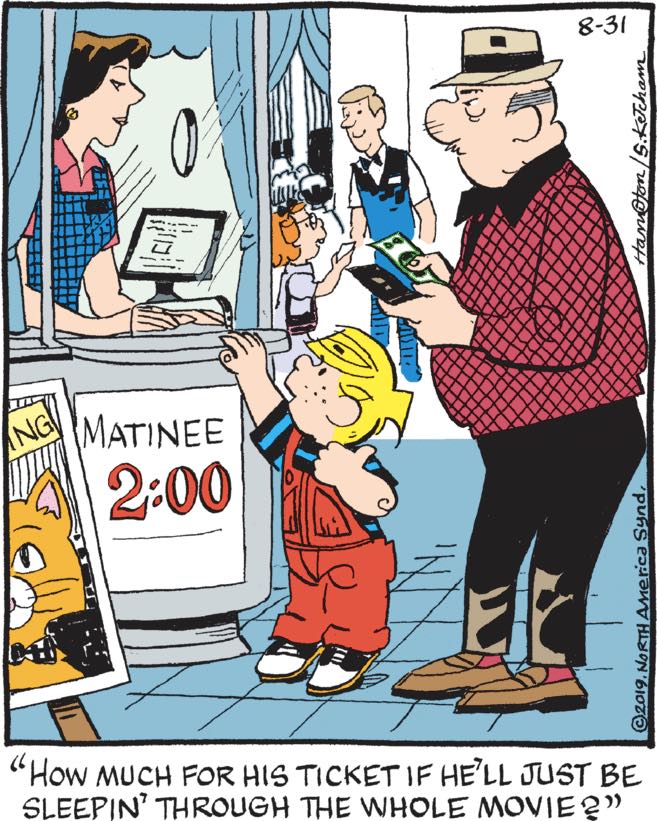 Lord knows I’m sympathetic to the dilemma that syndicated comics artists find themselves in, trying to generate new joke-bearing scenarios out of varying combinations of the same basic components year after year, but I don’t think today’s Dennis the Menace rings true. Could George Mitchell, who barely tolerates Dennis’s presence in his house, and who also generally can’t avoid Dennis because he never leaves his house, really have been convinced to take Dennis to a movie? Sorry, I can’t suspend my disbelief, though I do buy the idea that the precocious and mature Margaret would easily be able to navigate the cinema experience by herself, as we can see in the background.

You know, the whole goofy Dagwood food thing makes a lot more sense if we read it as an elaborate metaphor for sex addiction. Dagwood can get sandwiches in his own home any time he wants — his wife is of course very good at making sandwiches, and in a pinch he’s pretty proud of how well he can make one himself — but that can’t satisfy him anymore. He needs new sandwiches, different sandwiches, sandwiches in weird and unlikely places. He’ll make up any ridiculous excuse to go anywhere if it seems like he might be able to get a sandwich out of it, and now he’s gotten to the point where he’s not even trying to hide it from his wife anymore.

If you want a more mature, realistic take on what happens when a seemingly innocent trip to the golf course descends into lies and marital strife, we recommend Hi and Lois.

We haven’t seen a lot of Andy the dog in Mark Trail lately, and now we know why: he’s no longer fit to appear in a family comic strip because, as we can tell by his wide eyes and lolling tongue in panel one here, he’s become a sicko pervert who gets turned on by watching humans “do it.” (A lingering closed-mouth kiss what passes for “doing it” in the Mark Trail universe.)

Oh, sorry, have we not spent enough covering the denouement of the whole “Rex unmasks the Miss Galexia scam” plotline? Well, buckle up, because Rex is about to tell June the whole thing, in detail. 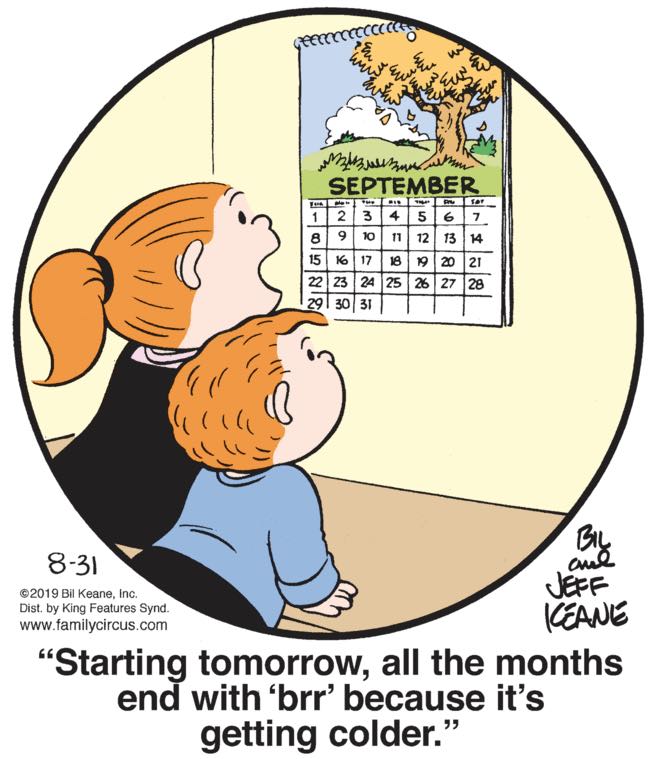