Well, weeks after making the mistake of trying to blow the whistle to Milford’s “mainstream” (i.e., Thorp-friendly) press, Chet is doing what he should’ve done in the first place, which is talk to Marty Moon, preferably in a context where Marty can get as drunk as possible with a non-Marty person paying for the drinks. So the setup is right, but the execution is botched. Marty says he’s listening but you can see in panel three that he’s already tuning out Chet’s blather about “two-a-days” and “Sam Finn” or whatever. C’mon, Chet! Lead with the scissors-throwing! Everyone loves a good scissors-throwing! 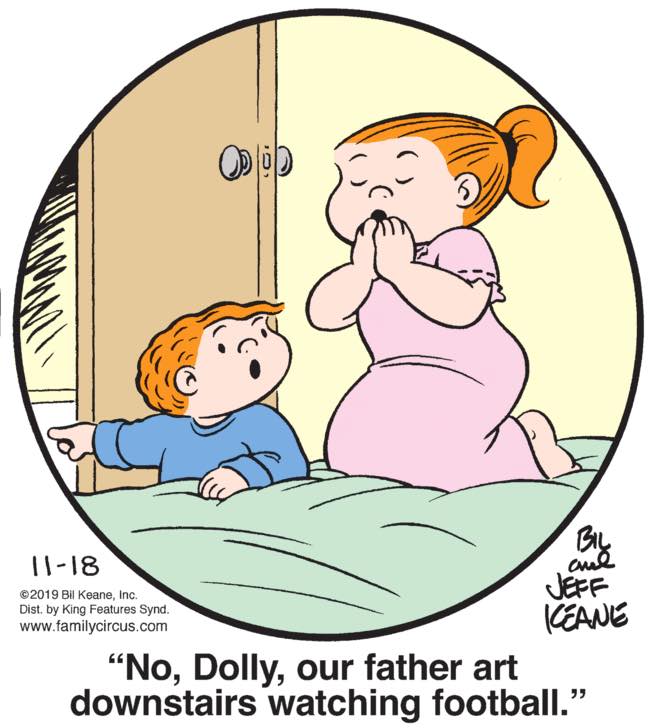 “Daddy” may be back at the help of the Family Circus, but the layers of narrative artifice on display during “Billy (age 7)’s run” are still present. Dolly prays to the Christian God, but He does not exist within the Circus’s circle; the Father and Creator is downstairs, watching football. (Of course, in real life, this God is dead, and in-panel reality is sustained by Jeffy, depicted here as His prophet.)

Crouching in your office chair, airing your hairy legs out and pressing an ice pack gingerly against one side of your head doesn’t exactly scream “patented hangover cure” to me, but I guess Wilbur’s the expert! I don’t want to say every plotline in Mary Worth should involve Wilbur getting dumped or otherwise romantically devastated, but, like, every fourth one or so? That’d be great.