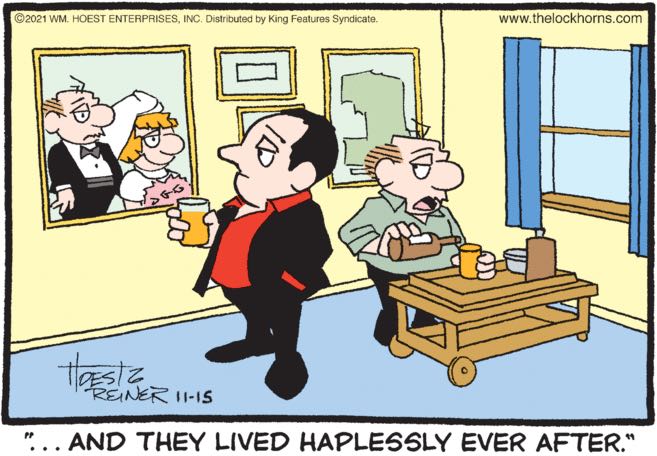 I’m really loving Leroy’s little bar cart here. You never know what room in the house you might be in when you abruptly need to theatrically pour yourself and a friend some hard liquor as you start griping about how much you hate your wife, so it’s good to be able to easily wheel your cocktail supplies from place to place. 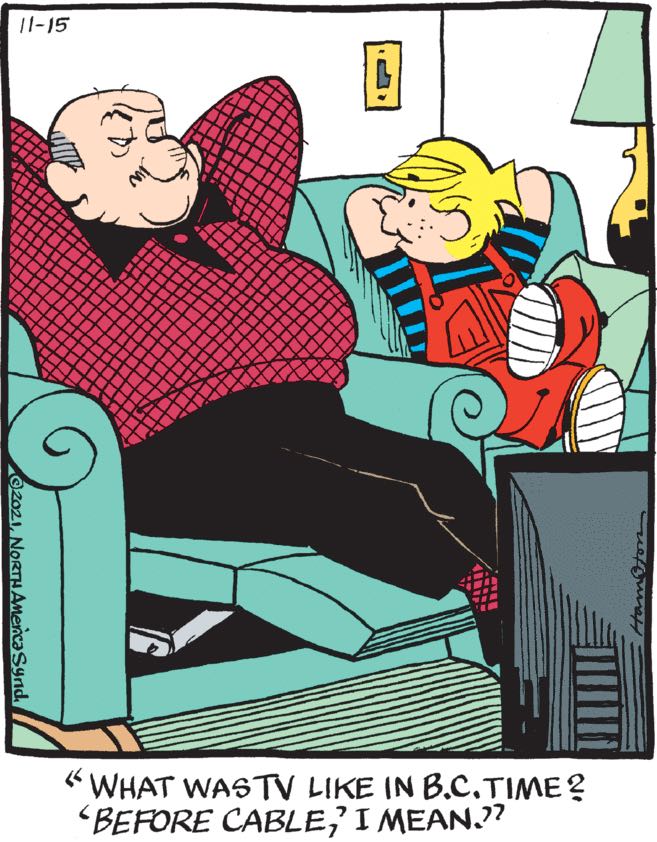 “Get it, old man? What Christ was to you in your long-ago day, cable television is to me in this brave new world! TV is my lord and savior! Pretty menacing, eh? I could be obsessed with YouTube videos on my parents’ phones like a normal five-year-old, but instead I worship television that you pay $150 a month for and it comes on at a specific time of day, like I’m 55 and have never been ‘good with computers.’ That’s pretty menacing too, in its own way.”

I’m not sure if there’s some kind of upcoming anniversary involving one or both of these absurdly long-running strips that has prompted them to simultaneously acknowledge one another, and I don’t care to do the research to find out. I choose to believe that this is just the equivalent of two people who are by far the oldest at a party clocking each other and giving one another a silent nod of acknowledgment. Anyway, it’s too bad Jughaid is unaware of Archie Comics’ Jughead Jones, himself a character who’s been around almost as long as the Hootin’ Holler cast of Snuffy Smith, because I’m sure a lot more people are familiar with him than they are with Sheezix, at least until Gasoline Alley finally gets a CW sitcom of its very own. On the other hand, Jughaid is lucky that he and his fellow Holler residents exist forever in an ageless comic-book time, unlike folks in Gasoline Alley, who are trapped in a hell where they age in real time but their strip will never be cancelled and they will never be allowed to die.

Bowls of barf? Vikings tossing a severed pig’s head around, for fun? Looks like this is the week when Walker-Browne Amalgamated Humor Industries LLC realized that nobody really cares what you put in the newspaper anymore, and they’re gonna run with it.