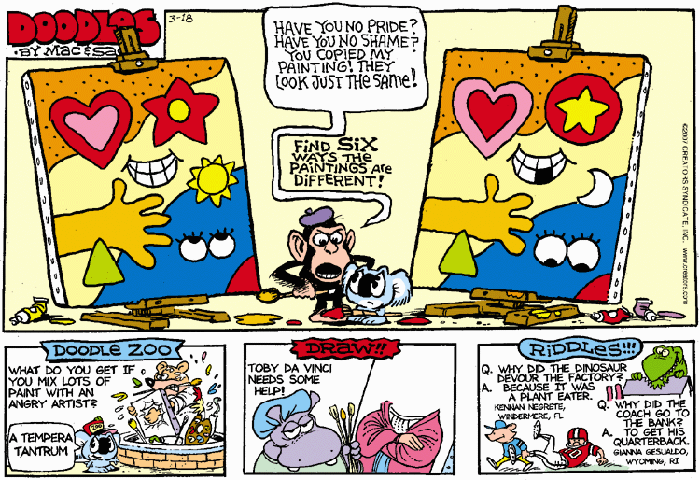 Ah, there’s lots of good artistic hate to be had in today’s Doodles. Our koala hero is usually the victim in this feature, getting haplessly devoured by various beasts, but today in my opinion our simian artiste has every right to be outraged by his marsupial rival’s blatant act of visual plagiarism. This is what comes of kids’ constant exposure to Slylock Fox’s Six Differences puzzles: they think, oh, we just need to change six things about a picture and it’s totally different! Well, it isn’t, and I think we’re about to see some monkey poo flung righteously to make that point.

Fun bits from the bottom: A painter assaults his own work in some kind of absinth rage; the charmingly named “Toby da Vinci” stares dully out at us, proudly showing off his headless creation; and a classic anti-Semitic football joke is reworked for general consumption. 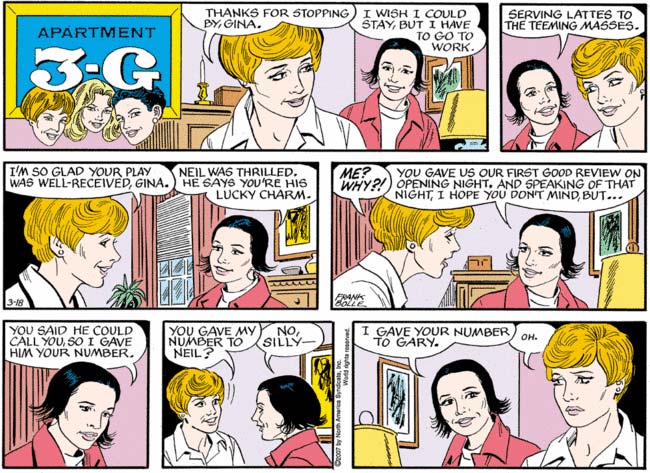 OK, for a while I was willing to believe that Gina was just unnaturally self-absorbed and clueless, but it’s pretty obvious now that she’s decided to just torment Tommie relentlessly for some reason. Does any normal English speaker ever just switch pronoun referents in mid-thought? No, unless they’re trying to screw with your head. The only question is: why would anyone want to persecute poor Tommie Thompson? Isn’t her life pitiful enough as it is?

I note that, like most underemployed actors, Gina is slumming in the caffeine-delivery service industry. I’m guessing she manages to insult her customers on a routine basis. Fortunately, she’s probably too dumb to notice how bad her tips are. 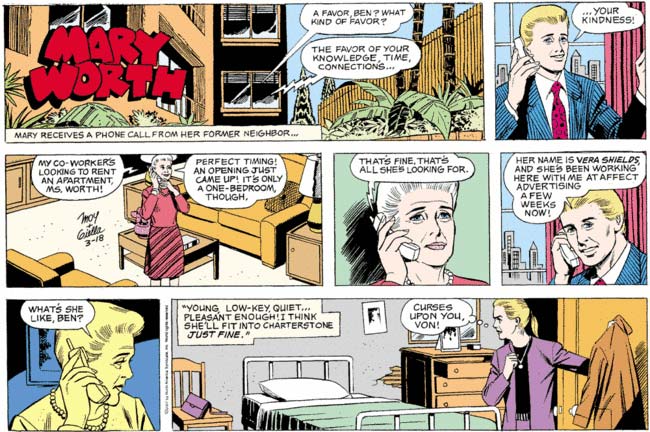 Wow. Just … wow. I’m not even sure how to follow that up. Vera Shields looks like she has a lot of internalized anger. We all know of, course, that anyone who comes into Charterstone experiencing normal human emotions must be dealt with, and harshly. So, the question is: is Vera going to be the kind of Mary Worth peripheral character that Mary needs to help … or the kind that Mary needs to kill?

With its decaying plaster, crooked pictures, and bed that was blatantly scavenged from a dumpster behind a hospital, Vera’s apartment looks way too downscale for an up-and-coming ad exec. It’s barely a step up from the downtown women’s shelter! My theory: “Von” is actually Houston Texans defensive back Von Hutchins, who blew a tackle that allowed the winning touchdown in a game that Vera had 50 large riding on; thus, this filthy tenement room is all she can afford after she makes her monthly usurious payment to her bookie. 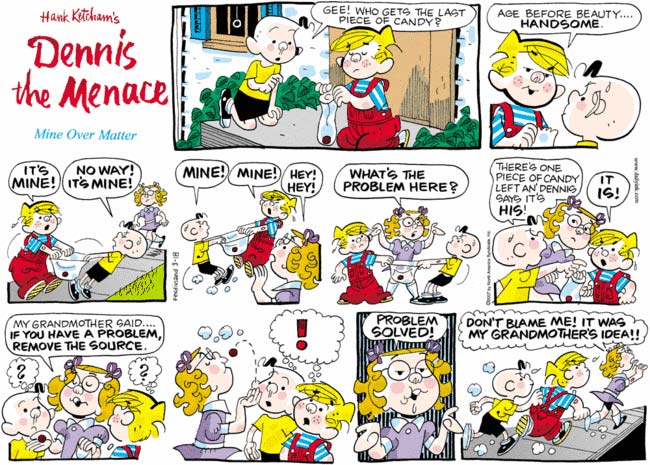 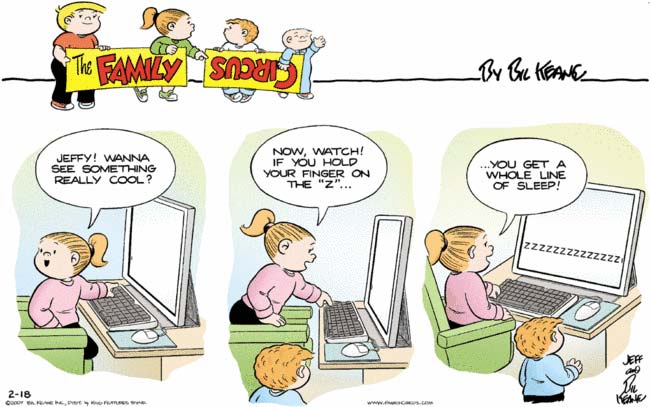 You know, there are literally millions of people working in the IT industry, from the theoreticians who come up with the big-picture advances that make faster processors and clearer monitors possible, to the engineers who build the chips and the programmers who write the code, to the human factors experts who make it all accessible to the ordinary user and the factory workers in Taiwan who put the physical parts together. And I think all of them would look at this cartoon and say, “This? I spent the last fifteen years of my life for this? ‘A whole line of sleep?’ I should have gone into insurance like Mom said.” 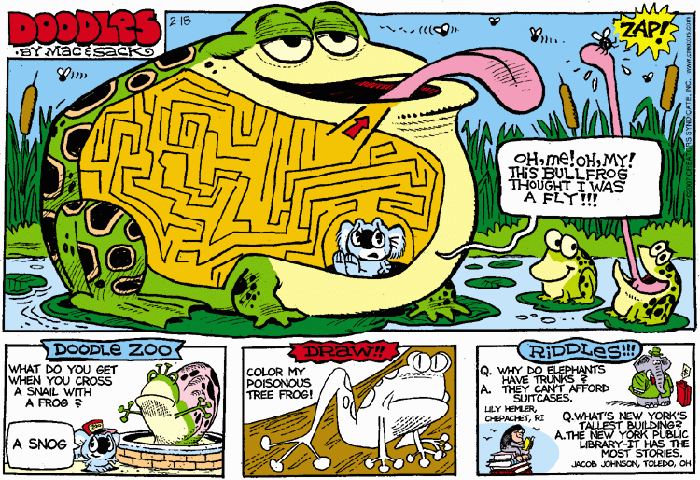 Why is it so hard for this poor, dumb koala to keep out of the gullets of various koala-devouring beasts? Why aren’t the little frogs at right more concerned about the presence of the freakishly oversized mutant frog in their midst? How did said freakishly oversized mutant frog find a freakishly huge mutant lily pad to sit on? Why doesn’t the Doodle Zoo feature two snogs, snogging? These are serious questions and I demand answers. 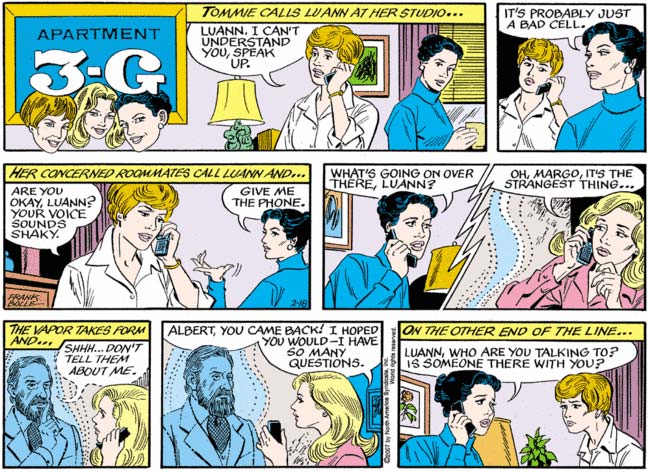 I’ve been treating the totally insane Wacky Adventures of Lu Ann and Albert Pinkham Ryder storyline in Apartment 3-G with the comics-reading equivalent of covering my ears with my hands and shouting “LALALALA I CAN’T HEAR YOU,” but I have to admit being charmed by the look of disgust on the grim specter’s face in the second panel of the bottom row. “Oh, great, I command you not to tell them about me, and then you just go and say my name so everyone can hear it. Why don’t you just take a picture of me with your cell phone camera while you’re at it? God, I keep forgetting what a bad idea it is to haunt stupid people.”

“This is a good start — they’re rooting for a team that’s being soundly defeated and declaring that their Friday night is wasted. But have you considered giving one of them a fatal disease? Maybe shearing off a limb? Think about it.” 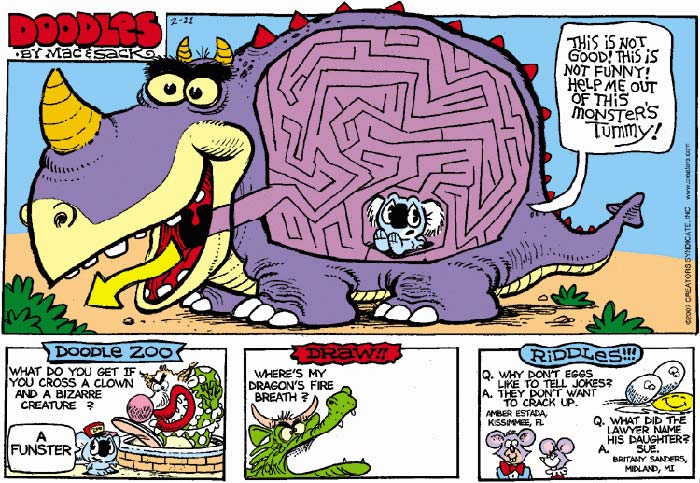 I had a minor obsession with Doodles by Mac & Sack in the early days of this blog, which was recently rekindled when I realized that the “Sack” half of this doodling team is one of my favorite political cartoonists. This so-called “kids” Sunday feature still centers on way too much trauma for my taste. Today, having somehow escaped the clutches of a “friendly” boa constrictor, our nameless koala hero must crawl through the acid-drenched intestines of this hideous beast before the digestive process dissolves him into nothingness.

Also, in the “Doodle Zoo”: crossing a monster and a clown? For the love of God, aren’t clowns themselves monstrous enough? 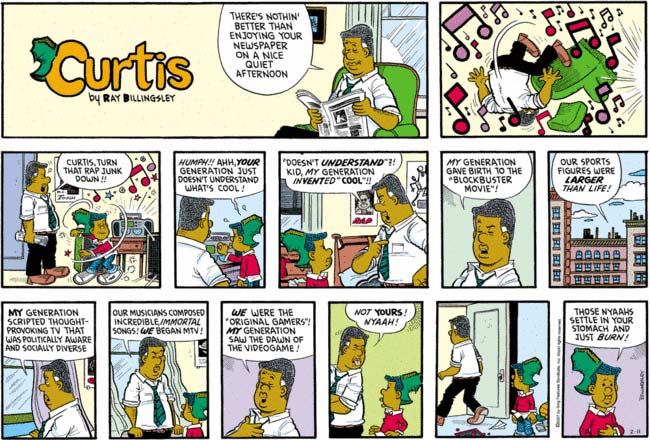 Today’s Curtis illustrates the pitfalls of not following the FBOFW route but instead just keeping your characters the same age indefinitely. Curtis’ dad has, in his socio-cultural tastes and proclivities, been depicted as a typical baby boomer, in love with Motown and funk, and implacably opposed to the “rap” “junk” beloved by his eldest son. That all worked fine when the strip debuted in 1988. Now, nearly twenty years later, Greg would be getting on a bit in years to have come of age during the Temptations’ heyday but still have eleven- and eight-year-old kids. Today, we see that his age is being stealthily advanced; now his cultural tastes were set in what looks to be the late 70s and early 80s, the age of Space Invaders and the embryonic MTV. The problem is that that’s getting perilously close to the birth of hip-hop as a widespread cultural phenomenon; in five years, we may be seeing Mr. Wilkins berate his son with “You call that ‘Compton Kaheem’ junk rap? In my day we had Grandmaster Flash and Run-DMC!” or the like.

Also, as faithful reader AtomicDog and others pointed out, the punchline here is cribbed from a classic Peanuts strip, though in that case the “nyaahs” weren’t directed at Charlie Brown by his own father, which adds a bit of an edge here.

The main point of Sunday’s Judge Parker involves some mysterious, sinister lady in a pillbox hat who will no doubt be featured over and over again saying close variations on the same thing this week, so instead I wanted to focus on the throwaway panels, which offered me a chuckle with their depiction of this trio of North Americans contemplating architecture. “Oh my God, that building is, like, so old! Totally awesome! I bet it’s like, older than, like, my grandma and stuff! It’s so old it doesn’t have a parking lot! Radical!”

I’m not sure how long Neddy has been wearing that beret, but I hope it results in no end of mockery for her at the hands of the Frenchies. Also, Abbey seems to have suddenly transformed into The Mullet Without A Face. 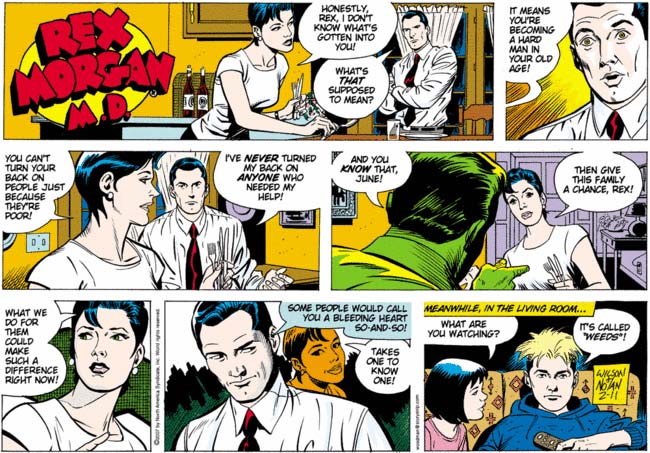 Man, words can’t describe the look of shock and horror on Rex’s face in the second panel. I think he heard the word “hard man” and thought for a brief, terrifying moment that June was going to try to initiate sexual relations.

Meanwhile, in the living room, I’m curious as to what direction we’re going with Niki watching Weeds, which, if you don’t know, is a show that centers on a soccer mom played by Mary-Louise Parker who is secretly running a marijuana business in her perfect exurban subdivision. I foresee a number of possibilities: