You might not know it based on his lackluster coaching record, but Gil is capable of shrewdly planning ahead. He’s facing an abrupt firing if he fails to deliver a basketball championship, and he surely won’t get that sweet, sweet endorsement money he’s been too good chase after once that happens, which is why he needs to establish his new “Gilpa” persona now, while he’s still a draw. Hopefully by the time he’s fired, fans of the Fox Used Auto Extended Universe will have come to accept him as one of their many beloved characters and he can keep getting paid work.

Not sure I fully understand the theological world-building that underpins Gasoline Alley. In this universe, Santa is an immortal gift-giver who takes post-Christmas vacations and runs his operation like a modern businessman, but is also (see the halo) Nicholas of Myra, a 4th century Greek bishop who has ascended to sainthood and can intercede with God to protect the lives of mortals, a category that apparently includes non-human elves. Did Jesus also die to save elfkind in the GasAlliverse, or did they have their own Savior? Really hope we’re going to explore all this rather than waste time on Bunky’s inevitably failed business venture. 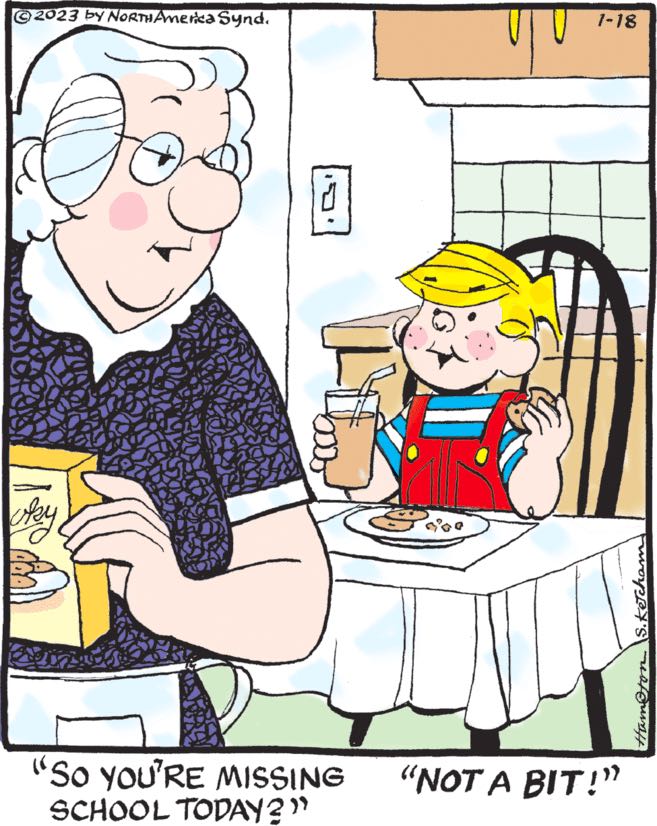 I was an extremely dorky child and teen, as evidenced by the fact that my big teenage rebellion consisted of skipping school a couple times a month so I could go by myself to the downtown library and read. But in my opinion, even that’s more menacing than doing it to spend quality time with a kindly old neighbor lady.

Iris and Zak just had a church wedding, but it’s never been entirely clear what their religious/spiritual deal is. Zak in particular seems unsure but curious about what happens after death. Will he and Iris be resurrected bodily, and be able to enjoy each other bodily, in the next life? Will they transcend this plane of existence and love one another as spiritual beings of pure mind, delighting in each other in ways we can’t currently even imagine? Is it necessary for Iris to go through an elaborate mummification process after her death, and for Zak to be buried alive in her pyramid, to ensure that they will be together forever in neter-khertet, the underworld realm of Lord Osiris? These questions and more await them on their journey!

On the other hand, he may discover that marriage is a long slog and that twenty years or so from now one or both of them will, like Emily “Mimi” Thorp, find themselves flirting with their golf coach. Who can say! The future is unknowable!

Sorry, kids! Gil has a new commitment to winning and he doesn’t have time for mere gossip like “checking in on each other’s well being” or “saying heartfelt farewells after decades of working together.” How long do you think Kaz was standing there on the sidelines waiting for Gil to give the signal for the kids to bring out the cake and start his good-bye party, or at least make eye contact with him? Instead, all he gets is his longtime boss solemnly reading his full name off of a cue card. We the readers don’t need to get too broken up, as I assume that Kaz will continue to pop up in Thorpian adventures in some capacity, unless that Coach Kaz, P.I. spinoff strip I’ve been trying to manifest for years is finally going to happen.

“Getting people interested in a story about Santa and his elves in mid January” is not a challenge I would’ve thought Gasoline Alley was capable of meeting, but I have to admit “Santa’s elves live in constant fear of arbitrary summary execution” has me intrigued!