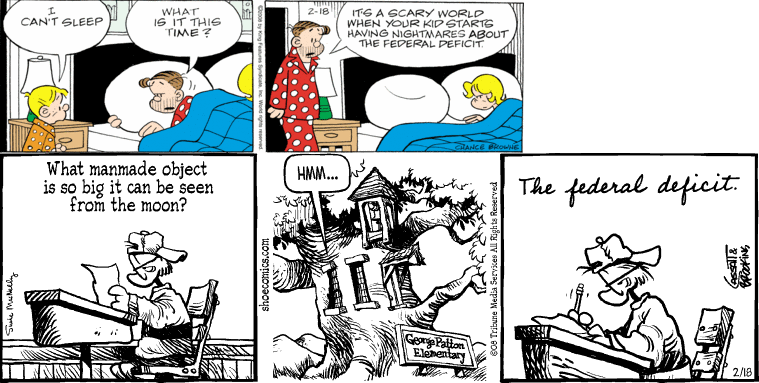 On the day on which we officially celebrate the birth of George Washington, and our many car dealers celebrate other, lesser, presidents, two comics have decided to honor America’s 43 chief executives by highlighting what they do best: running up huge deficits that scar our children emotionally. (Yes, I know, they have help from Congress on this, but Congress doesn’t have a holiday — a fairly puzzling development, when you think about the fact that Congress is in charge of voting holidays into existence.) Ditto Flagston has been rendered sleepless with terror in the face of the huge spending spree going on that places him and the rest of his cohort billions of dollars into debt before they even reach voting age; meanwhile, young Skyler Fishhawk is merely prematurely cynical when confronted with the abdication of governmental responsibility. Which outcome is more troubling? 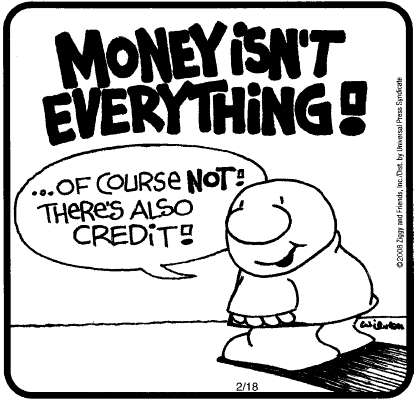 From day to day, Ziggy panels end up at various and seemingly random locations on a sliding scale of realism. On some days, we’re confronted with scenarios that might almost occur in real life, as Ziggy bickers with surly diner chefs or admonishes his pets; others seem more symbolic and dream-like, with our pantsless eponymous hero demanding self-aware automatons or confronting philosophical vending machines. Today’s installment is particularly trippy: are we to understand that the aphorism hanging over our bald, dwarfish protagonist is spray-painted on the blank expanse of wall that he’s standing in front of? Or is it something spoken aloud, but not contained in a word balloon because it’s the booming voice of our omnipresent creator? The stark shadow trailing behind Ziggy’s feet hints at the latter, as it would seem to indicate that he’s facing into some sort of blinding divine radiance. It’s kind of sad, but at the same time kind of unsurprising, that Ziggy’s God would speak in bland cliches.

Non Sequitur no doubt prides itself on being the crankiest and most cynical strip around by an order of magnitude, so it’s kind of sad that today’s entry could be reworked without too much effort into a Pluggers installment.

Marvin takes a moment away from its cavalcade of hilarious ass jokes to remind you that having a child will destroy your sex life. Ha ha, so hilarious! I like that dad is holding a mug labelled “DAD”, as if to emphasize that he’s made the transition from vibrant, sexual being to exhausted, zombie-like baby minder. I’d say the heavy-lidded look of suicidal depression on the characters’ faces is another nice touch, but that’s pretty much what everyone in Marvin looks like all the time.

So Mary Worth’s storyline seems to have finally given up, and I say good riddance. It could never really figure out what it was supposed to be about — fortune telling and condo association rules? Agent Orange? a battle for biddy supremacy? Mary’s latent guilt? Mary’s latent love for Jeff? tuna casserole? As Ella drives off, presumably to her death, we can only hope that more interesting things, or at least more coherent things, are in the cards.

And call me a hopeless optimist, but I’m guessing they are! “Hi there! I’m Gropy McGrabass, and I’m an up-and-comer here at Creepy Lack Of Affect Advertising Agency! You must be the new person here, right? I bet you haven’t had your sexual harassment seminar yet! It’s a load of bullcrap, trust me! Hey, mind if I rest my hand on your rear end for the next three to six months?”

Well, I live in Baltimore, actually, but it’s true that I’m not afraid to point out blatant payola wherever I may find it. So don’t try to silence me, oppressive gears of international capitalism, and don’t try to buy me off!

It sounds like an urban legend, but it’s an absolutely true story: One of my wife’s co-workers had a baby a few years ago, and when she (my wife) was visiting her (her co-worker) at the hospital, another proud mom in the maternity ward reported that her husband needed to figure out how to spell their new daughter’s name, so he had just run over to the liquor store to copy it down from a bottle of Courvoisier. Because everyone should be named after whatever substance contributed most directly to their conception. 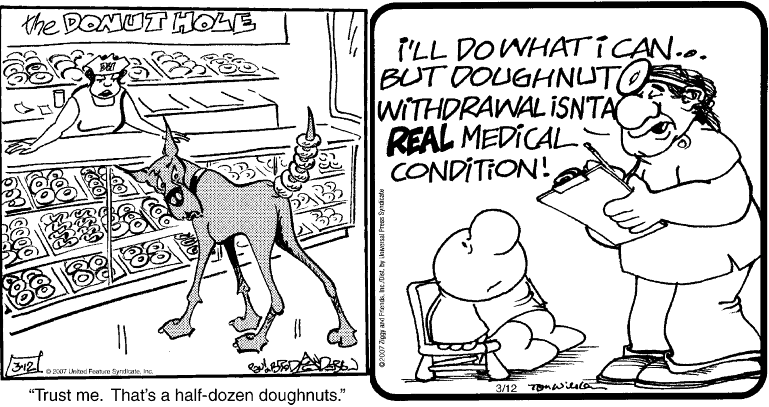 Today, two single-panel standbys took on an intriguing question: can a relatively lame and somewhat puzzling joke be made funnier by the addition of donuts, which some might argue to be an inherently amusing food? The answer is clearly “no”, but it’s nice to see them trying new things.

Does it make me a bad person to think that “the Donut Hole” is an almost unspeakably filthy name for a business? It’s not as bad as “the Bucket,” but still.

Glow-in-the-dark paint? I’m afraid Shady Shrew’s a lot shadier than that: that’s a big pile of radioactive waste, and our soricomorphic friend is a terrorist dirty bomber as well as a perpetrator of televised consumer fraud.

What the hell kind of home shopping network allows its vendors make crude, hand-painted signs for their wares? The kind that doesn’t have a geiger counter, apparently.

Going by Tommie’s facial expression, I’m guessing she’s all kinds of not listening to Margo. Not that it matters, because, as the greatest omniscient narration box in the history of omniscient narration boxes tells us, “Back at 3-G, Margo’s happiness is undiminished!” Pretty much every installment of this strip that features Margo could include that box, actually; just substitute “rage” for “happiness” if she’s in her other mood, and you’d be all set.

So wait, the new Mary Worth storyline is about the sex lives of unattractive middle-aged empty nesters? Oh, hell, no, I am not down for that. You hear me, Mary Worth? You’re on your own if you go down that road.

Oh, we both know I don’t mean that.

Also also: Why do cartoon moms get all gothy before bed? It’s kinda creepin’ me out. 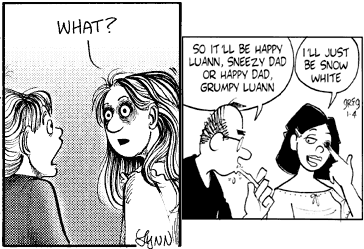