Look, sometimes I have to give you a long, convoluted explanation of what’s been going on in Judge Parker in order to talk about what’s happening in any given strip. But sometimes I can just say, “Oh, hey, FYI, Sophie’s just stone cold going nuts and delivering massive head trauma to a meth-dealing judge while weeping and letting loose a string of obscenities.” Doesn’t require a lot of context and it’s really just good clean fun!

OK, I admit it: Marvin can be off-putting even when it doesn’t talk about pooping and peeing. Like when people wearing eyeglasses are drawn without pupils, for instance. It’s a weird artistic choice that the strip sometimes, but not always, makes, and it’s real unsettling! Or when they decide to really draw attention to the fact that the characters only have three fingers and a thumb by putting a ring on someone’s middle finger. Don’t care for it! Don’t care for it one bit!

I don’t know what I want from the comic strip Gasoline Alley, exactly, but I feel comfortable saying that “media criticism from talking animals” isn’t it. Still, I can’t help but join in and point out that if you’re looking to document an animal maybe seeing or maybe not seeing its shadow, having giant lights shining on said critter could really cross the line from observing to affecting.

Is the Comic Sans font trademarked in some way? Maybe it is, and maybe it isn’t, but the important thing is that writing an email to the boys in legal to find out would cut into time relaxing on the golf course, so let’s just err on the side of safety, shall we? 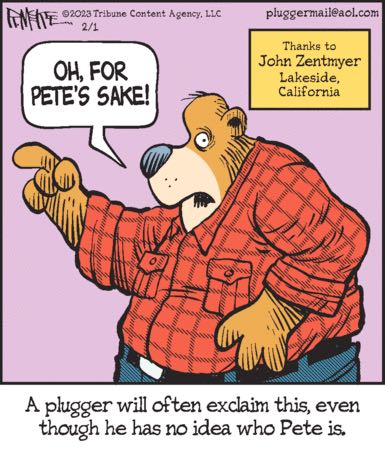 So you’re telling me that pluggers are unfamiliar with Simon Peter, Cephas, Prince of the Apostles. St. Peter. The guy at the pearly gates. That guy. Pluggers have never heard of him. You sure about that? You sure about that, Pluggers? I don’t want to get into an argument or anything, but I gotta say that I myself am not so sure about that.

“Oh, do you think having to read about a baby who’s constantly pooping and pissing in his diaper is gross? Well, what if instead of a baby, it was a five year old boy? That would be worse, right? It would be a lot worse. So just think about the stuff you complain about. Because it could get a lot worse.” –the comic strip Marvin, in a threat directed against me personally

I suppose this little kid already knows about the car accident, but it would be extremely funny if this were June trying to deliver bad news gently. “Is my mom okay?” “Don’t worry, Tommy. There have been huge advances in mortuary science lately, and she’ll still be able to have an open casket funeral.”

Only selling vapes to kids old enough to buy them? Generating income from legitimate jobs? This vape fundraising is the most licit illicit money-making scheme this strip has seen since the days of the tattoo parlor that hooked kids with illegal DVDs that were actually legal!