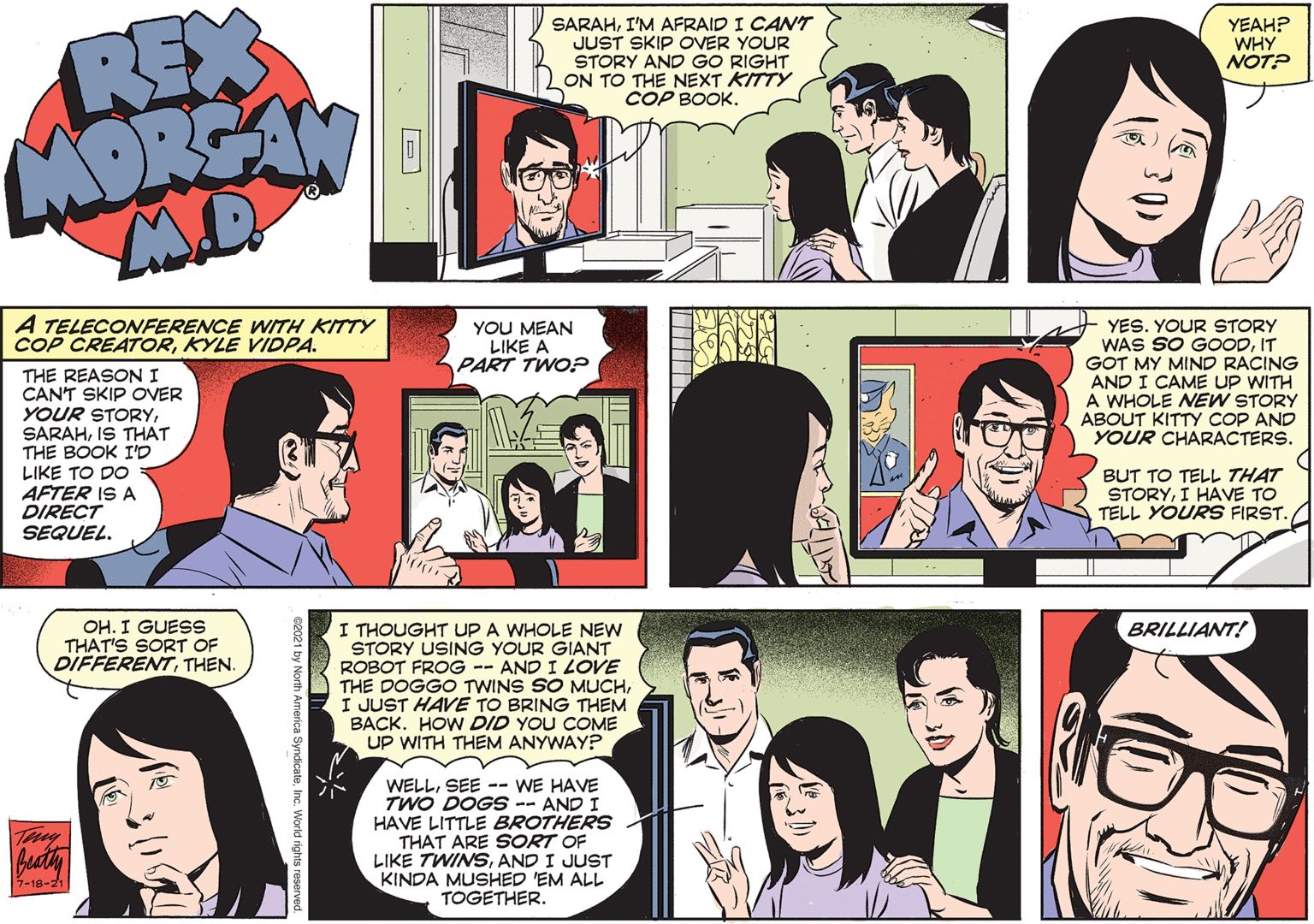 “Wow, so instead of straining to come up with story elements ex nihilo like I’ve been doing, you used aspects of your everyday life for raw material? Brilliant! By the way, you’ve never heard of ‘character rights,’ have you? Great, great.”

Have you ever wanted to see an elderly Viking woman learning the basics of supply and demand curves … the hard way? Well, the throwaway panels from today’s Hagar the Horrible are for you, my friend. 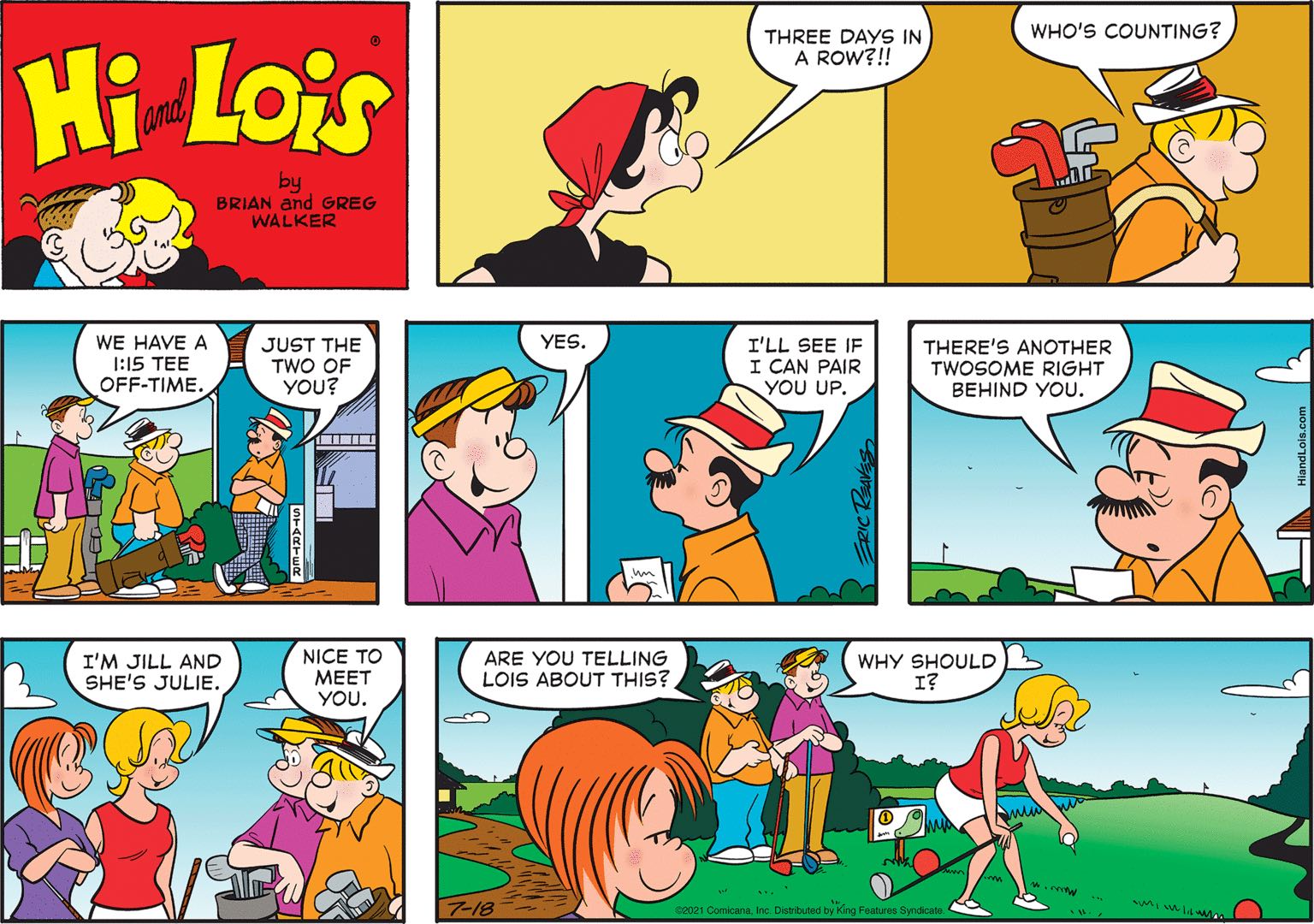 YOU, A SIMPLE CLOD: “Wow, this joke doesn’t work at all. It’s a real stretch for something that’s not even funny.”

ME, A COMICS-ANALYZING INTELLECTUAL: [paralyzed by the choice between posting a map of the pin-pen merger in order to narrow down Hootin’ Holler’s location and writing up a rant about how Silas is the most educated person in Hootin’ Holler and the least likely to misspell a simple word like “tint”]

Hey, remember Kyle’s terrible case of writer’s block, which set this whole plotline in motion? Well, it got solved, off-panel, somehow. Bet that takes a real load off your mind, huh?

“No, my husband just flings food around the kitchen. Look at this shit! You think anything vaguely palatable is going to come out of this process?”

“Removing the border between the last two panels of today’s Dennis the Menace would work so much better on every conceivable level. How do you get aesthetically outflanked by Hi and Lois? How do you even show up to work the next day after that happens? How do you face your family?” –Dan

“In his childhood memory he’s smoking a pipe and wearing the same clothes he’s wearing at the moment. This is a man blocking out his childhood and creating alternate memories. Hi & Lois is about to get real dark.” –Donny Ferguson, on Twitter

“Oh, cool, this is that classic sitcom plot where the spouses trade jobs for a week. Henry will learn that household chores are a pain in the ass, and Alice will learn that if you work as an aerospace engineer without any training, your rocket will blow up and kill half a dozen people on the ground.” –Anonymous

“Ah yes, mowing, mowing all the time. Mowing and smoking, smoking and mowing. I wonder which was the bigger addiction? I was the mowing-est, smoking-est kid in town. I used to mow all the neighbors’ yards for free. There’s no joy in finishing off a pouch of Captain Black without having some grass to mow at the same time. I wonder… would it really do that much harm to just clean up that little patch of grass Chip left? Do I still have one of my old pipes in that box in the garage, or did we throw it away? Maybe I’ll just… No, Hi, no! That way lies madness! I’d better text the kid.” –Peanut Gallery

“This strip is about space coupes crashing into Jupiter, and yet the single most implausible element is Diet Smith smoking indoors without incident.” –Joe Blevins

“It crashed on Jupiter! Jupiter, Florida, near the campus of Florida Atlantic University, to be exact. Go Owls! Given that it launched from Cape Kennedy, about 120 miles north, I’m guessing they weren’t very good pilots. Or maybe I’m a terrible engineer. Either way, there’s a heap of scrap filled with bloated bodies in Jupiter, Tracy, and I know that’s the sort of thing that gets you excited.” –Voshkod

“I also made lemonade but I have no idea if it’s any good because my socks are too tight. Does any of this make sense? Is this how things work?” –Shoe Substitutes

“Since disc golf is really taking off these days, I can’t wait to read a comic where Hi is vaguely baffled by Chip playing this wild new sport that cheapens his beloved pastime. I imagine this comic will run 15-20 years from now.” –Tristan Olson, on Twitter

“Do the birds of Shoe not have dictaphones or shorthand? Maybe that’s why they’re always so weary and surrounded by piles of paper, because they’re always trying to write out 180 word a minute speeches by hand.” –Schroduck

“For a professional comics snarker, Josh still has a lot to learn. When it comes to legacy comics, there are certain things that are inherently hilarious and serve as punchlines on their own with no need for wordplay or embellishment. For example: present day technology, unexpected visits from relatives, mentioning a one-dimensional character’s sole trait, the weather, and above all golf. And if you can manage to combine some of these factors, such as a strip where a character can’t go golfing because it’s raining or his mother-in-law is in town or he can’t figure out how to reserve a tee time with his newfangled iTelephone, well then, you have what is known as a genu-ine gutbuster, sure to adorn the cubicle walls of your least-tolerable coworkers.” –jroggs

“I think we’re supposed to hate Ashlee because she’s a grifter, but hear me out: what if we hate Drew for being the easiest mark ever? Like, damn dude, how do you remember to breathe.” –Twiggy Peas, Champion of England, on Twitter

“I don’t have any money. I already told you that I live with my dad, my watch was a gift, and I work at the People’s Clinic. Also, I gave Mary Worth my power of attorney after I loaned Shauna money for her political campaign.” –Mysterion

“Ha, look at the waitress’s face: despite her best efforts, she is now picturing Mr Wilson in the shower. I hope you’re taking notes, Dennis, Mrs Wilson is the real menace.” –pugfuggly

“Wait, he invented perfect deepfakes and he used the technology just to put a comic strip into reruns?! I have never seen such a big waste of talent and mental capacity on useless things like comics since that time Josh opened this blog!” –Ettorre

“The setup would work better if Jughaid was about to get a shot, except that we might have had to look at his stubbly misshapen buttocks instead.” –nescio

[Little thank you for reading this far goes here :) ]