That promised weekend wrap-up metapost will be coming soon, but I thought you might enjoy, you know, some comics commentary or something. I had originally planned to skip over the comics from the days I was away, but of course I had to read them to catch up, and some of them just called to me, so here are the highlights of all the stuff I missed. (Sorry in advance if I step on anyone’s snark, I haven’t had time to go over the weekend’s 1000+ comments in depth…) 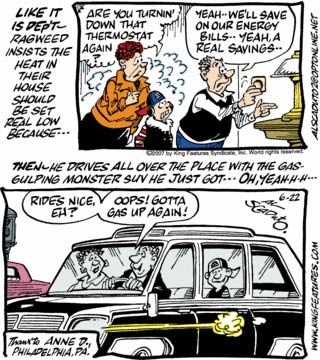 Yeah, I know, this one’s from Friday, but faithful reader anne failed to tell me in advance that “Anne D.” was her! So, enjoy another moment in Curmudgeonly TDIET domination.

You know, I don’t think we give the Archie Joke-Generating Laugh Unit 3000 enough credit. If you gave a mere human the task of of creating a comic strip in which a teenage boy sprays a sexy teenage girl with a hose but which is nevertheless entirely homoerotic in subtext, he or she would invariably stalk off, proclaiming loudly that such a thing is impossible. The AJGLU 3000 merely churns through data and chugs forward implacably to its programmed destination.

“Yeah, see, we call them that because sooner or later one of them is going to have a massive myocardial infarction right there in the booth. Ha ha! Hopefully I won’t be on duty when that happens, ’cause they’d probably make me help move the corpse.” 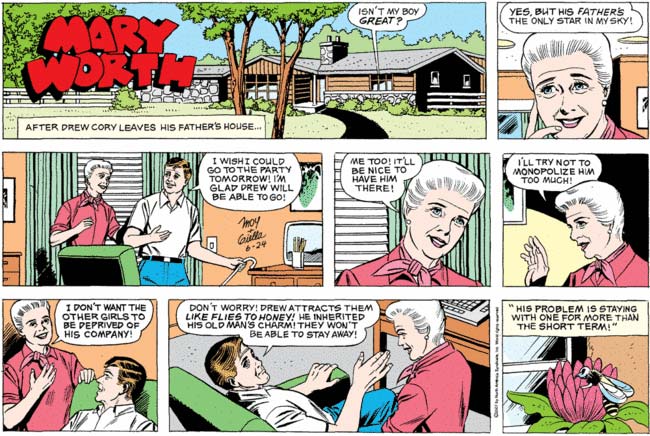 This may be the most frankly sexual Mary Worth (and is there a more disturbing four-word sequence in the English language?) in the strip’s long history. Dr. Jeff’s attempts offer up his son has a substitute object of Mary’s affections are quickly quashed. Mary then goes on at great length about her plans to pimp the junior Dr. Corey out to every woman at the party; she’s so excited at the prospect that her ascot has been knocked askew. Dr. Jeff, while obviously proud of his son’s virility and sexual fitness, expresses his concern over the young fellow’s man-whoring. To cap things off, we get the image of a bee pollinating a flower, soon to fly off to another, illustrating Drew’s “love ’em and leave ’em” policy in one of the most discomfort-inducing metaphorical fashions possible (presumably instead of spreading pollen from blossom to blossom, he brings chlamydia instead). Will Vera’s womanly parts be the hive that will trap this bee with its sweet, sweet honey? Stay tuned! 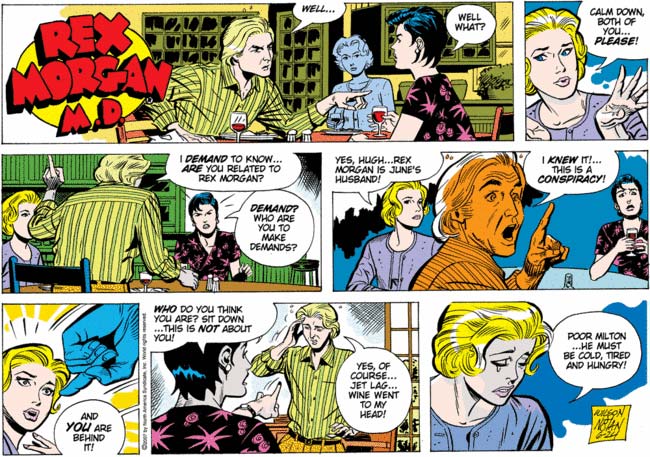 The most awesome thing about this Rex Morgan is that every single thing that Hugh is saying is in fact 100 percent demonstrably true, and yet he’s being drawn like a paranoid lunatic drama queen. Panel four, in which he waves his highly trained pointing figure around while he stares goggle-eyed and shouts accusations at nobody in particular, with June rolling her eyes in contempt, is particularly choice. Heather can only defuse the situation by again busting out the “Boo hoo my poor rich husband is dead or possibly floating in the icy North Atlantic” waterworks, which strategy will presumably have diminishing returns.

OH MY GOD CLAMBAKE IS A FRAUD! I’m more than a little embarrassed to admit that I didn’t see this coming at all. I’m looking forward to the shocking revelation that not only was he never in the Negro Leagues, but he’s really just a Greek guy with a good tan!

I swear to God, the first time I looked at this, I though Sally’s thought balloon read “I wonder how high I could get before losing my job.”

Ralph, meanwhile, is fooling nobody by poking at a keyboard that isn’t attached to anything. “Easy Ralph … easy … she’ll forget you’re here in a minute … then uncross her ankles … that’s right … any minute now…”

Ha ha! Id is an absolute monarchy and the king’s power isn’t checked by any other institution or law, so he can order the gruesome torture of any of his subjects for the slightest of insults! Ha! The press secretary’s arms have probably both popped out of their sockets, and he’ll die in agony over a series of days! Ah, whimsy.

Gasoline Alley has been so breathtakingly dull lately, what with plots about sleep apnea and tinnitus by turns, that I haven’t felt the urge to note its continued existence for the last seven months. Today looks promising, however, as it seems to herald the beginning of a new story about how awful it is when black people move into the neighborhood.