Ha ha! Oh, man, the Gil Thorp summer hijinks are getting started even more quickly than I could have hoped! I’m totally in love with Gail Martin, the “rock and roll Carole King,” as she was called yesterday; truly, nothing shouts “rock and roll” like a collared shirt and a long braid that you clutch dramatically to your chest while you belt out your non-hits and your banjo player grooves behind you. This looks exactly like the kind of scene where a brawl would break out, and I look forward to tomorrow’s weirdly proportioned and strangely angled fisticuffs. Since Kelly has a troubled past with guys with rage issues, this should provide excellent fuel for one of the eleven rapidly crosscut dramas that will be entertaining us until football practice starts up again.

Ruby’s dialogue says “funny Texan with more realistic ideals of beauty than these supposedly sophisticated New York City girls,” but her solemn expression in panel three, along with Tommie and Margo’s panicked exchange of glances, says “violent feederism.” In two weeks, look for the two of them to be tied to their chairs, their faces smeared with tangy barbecue sauce, begging for mercy, as Ruby says, “Nuh-uh, Maggie, you still only got one chin!” 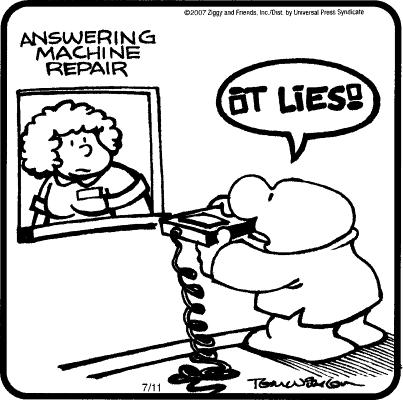 If you thought that the sight of a desperate, insane, bald dwarf with no pants jabbering about the dishonesty of inanimate objects while thrusting a fifteen-year-old household appliance at bemused service worker wouldn’t be funny, well, today’s Ziggy is here to be prove you wrong. I actually laughed aloud at this. Ziggy may continue to exist, as far as I’m concerned.

As I look at it more, I’m sort of hypnotized by the text in Ziggy’s word balloon. The symmetry between the sentence-initial “i” (lowercase, in defiance of all known typographical conventions) and the final exclamation mark, makes it look like he’s actually shouting “T lies!” in Spanish. Which, for my money, is even funnier.

I’m only marginally less sick of Brad-Toni than I am of Curtis-Michelle, but this sequence is growing on me. If Toni ends up running off with uberskeeze TJ because of his cooking (or “cooking”) skills, I will be willing to forgive a lot that’s happened in the last few years.

It just wouldn’t be Dick Tracy if the payoff didn’t include somebody writhing around in pain. This isn’t the optimistic fantasy land of Mark Trail; those eyes aren’t growing back. 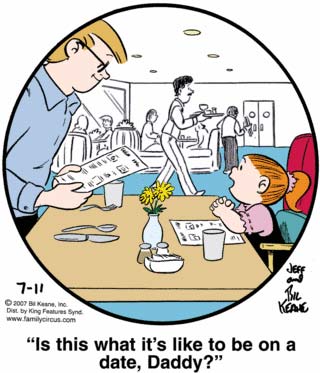 Hmm, what’s the most alarming part of this? Yeah, I’m going to have to say that it’s Big Daddy Keane’s little smile.

Gasoline Alley: the one comic strip that isn’t afraid to show you how the system is stacked against the white man.

In a strip that brought us such epic battles as Dr. Octopus vs. his television, Spidey vs. a bowl-hatted butler, Spidey vs. his own outdated ideas of economics and gender, and, of course Spidey vs. a brick, today’s struggle between J. Jonah Jameson and Larry King may represent a dramatic zenith.

And, finally, I’m sure sexy toast-eating is somebody’s fetish, so: 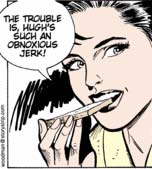