Happy 50th birthday, Wizard of Id! You’ve spent half a century churning out quasi-medieval whimsy to the delight of several, and show no signs of stopping, so by all means let your mildly beloved characters pause and take a bow. Many of today’s other strips also paid tribute to this testament of syndicated comics longevity!

Mother Goose and Grimm decided to celebrate Wizard of Id’s penchant for using the literal torture of human beings as a punchline. I was going to say that torture was “a big part of the Wizard of Id brand” but that was a little uncomfortably on the nose.

Looks like all this devilish wizardry in the newspaper is tempting Hootin’ Holler’s youth into lives of service to satan! This is what you get when the federal gummint overstretches its reach to outlaw local traditions like stoning blasphemers. 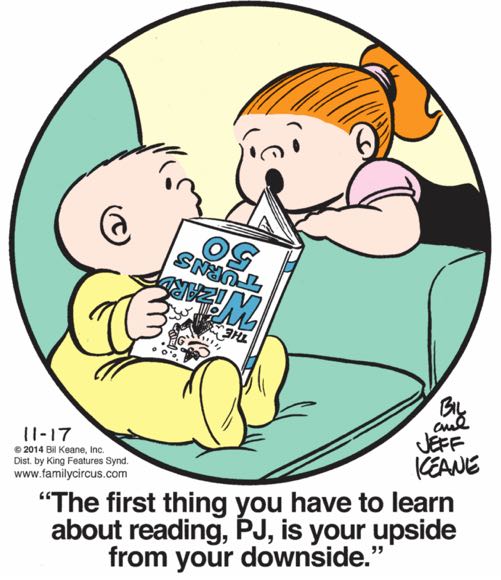 The Family Circus rather ungraciously implies that the strip is best enjoyed by babies and other illiterates.

Meanwhile, Dagwood doesn’t even bother to acknowledge the cake-gratulations (I JUST INVENTED THAT, © AND ™ JOSH FRUHLINGER, DO NOT STEAL) this bakery is offering because he’s so focused on buying his wife precisely the gift that he wants to eat.

Finally, the Wiz looms in the background in panel two here as some sort of pop art painting, as Chip realizes that his parents’ dysfunctional marriage will forever compromise his ability to love.

Some strips did bravely ignore this important industry anniversary, however:

Our heroes in Judge Parker have decided to hunker down and get as drunk as possible, in the hopes that once they sober up all their problems will have resolved themselves.

And Funky Winkerbean promises that the next week will consist entirely of hardcore Bushka family sex scenes. Stay tuned!