Guys, guys, guys, are you ready for Tommy’s drug-free, Christ-centered summer romance? Because it’s happening! Tommy has chivalrously driven his comely co-worker home so she doesn’t have to take the bus, and I assume from his pregnant pause before “hang out” that her neighborhood was the site of some criminal adventures in his younger “very own meth lab” days. That’s probably where he went to buy — as an ahead-of-his-time entrepreneur, when it came time for him to peddle his wares, he did so in the leafy environs of UC Santa Royale, which unfortunately resulted in his immediate arrest. Anyway, I assume that Brandy lives downtown, which in the ’00s was a seedy, nightmarish hellscape filled with tank-top wearing toughs and abused women who had to suffer at the women’s shelter if they didn’t have a nice lady like Mary to take them back to her condo; but today it has a burgeoning arts scene and is, as Brandy notes, gentrifying nicely. Better not try any funny drug business around here now, Tommy! The cops actually respond to calls downtown these days!

Last week’s Crankshafts were all about how Crankshaft hoarded thousands of “Bean’s End Catalogs” (Bean’s End being like the combination of LL Bean and Land’s End, only … about gardening equipment rather than sensible clothing?) and eventually agreed to sell them off, and then they were purchased by obsessive collector Chester “The Chiseler”; meanwhile, ten years later in the Funkypresent, Chester, now the employer of Darin and Mopey Pete at a doomed comics startup, decided to unload his Bean’s End Catalog collection on eBay in order to bring in some cash to stretch out the lifespan of said doomed comics startup. I didn’t cover any of this at the time because it was all boring, but I am assuming that Funky’s dad lurking around weirdly and overhearing this conversation will lead to him buying said Bean’s End Catalogs as a gift for the now-comatose Crankshaft. I’m not sure how this dovetails in with the few things I seem to remember about Funky-dad’s characterization, which is that he’s an alcoholic and a real asshole, but if he ends up spending the bulk of Funky’s inheritance on a futile gesture of kindness towards a man who won’t appreciate or even notice it, that’s OK with me!

“A whole country full of ruins? An entire civilization laid waste by foreign invaders and the alien diseases they brought with them, their people reduced to a subordinate caste for centuries and their monuments left to crumble in the jungle? And now I get to climb all over them and take pictures? That’s amazing! I can’t get enough!” 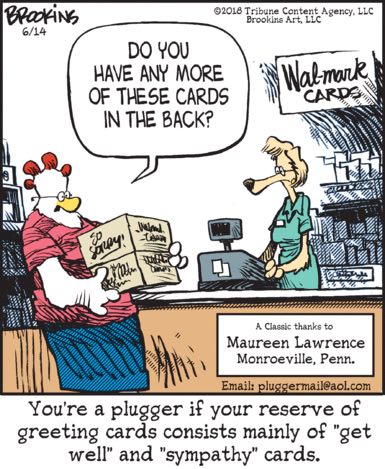 You’re a plugger if everyone you know is either sick or dead.