DRAMATIC MUSIC STING!!!!!! Much like Captain Ahab of literary fame, Dr. Camel has been on a single-minded mission of bloody vengeance ever since one of nature’s magnificent, savage creatures took his leg. And, sure, you’d think Mark or someone else would’ve noticed that Harvey has a prosthesis as they hiked together for miles through the foothills of the Himalayas, though maybe technology has advanced far enough that it isn’t really noticeable, making its revelation at this narratively opportune moment possible, or maybe Mark is so free of ableism that he noticed but didn’t find the fact remarkable so it never got worked into the strip’s narrative, who can say, but the point is that we now know how this is going to end: with Harvey’s corpse lashed to the yeti’s massive body, his arm seeming to beckon others to follow, and Genie, Mingma, and Pemba eagerly pursuing the monster into the forest while only Mark remains behind to write the tale, Ishmael-like, except unlike Ishmael he’ll be writing it for a glossy magazine with a fancy New York HQ, which will recompense him handsomely for his troubles.

Over in Crankshaft, we’re in the midst of a storyline where Ed and Lillian are in competition to see who can get more birds at their feeder, and today is the day we learn just how seriously Lillian takes this whole thing, since she’s clearly willing to sacrifice everything to win. Although perhaps she aims for a double victory: to escape by means of sweet death the unending sorrow of life in the Funkyverse, leaving Crankshaft, still alive and suffering, to watch the birds flock to his neighbor’s yard instead of his.

We all know, of course, that Crock is in a twilight of endless reruns, and I have to assume that the same economic pressures that encourage syndicates to just rerun outdated comics instead of paying for new ones also preclude hiring much by way of editorial staff to supervise said reruns; perhaps the publication of old Crocks is entirely automated — I’m visualizing a robot arm pulling paper copies of strips out of a filing cabinet at random here. But let me gently suggest that it would be worth it to have someone to give these strips a once-over before they go out, if only to ensure that you don’t publish one where a punchline about some seemingly futuristic technology has now, a decade or two it was written, just become a straightforward description of a thing people do all the time. 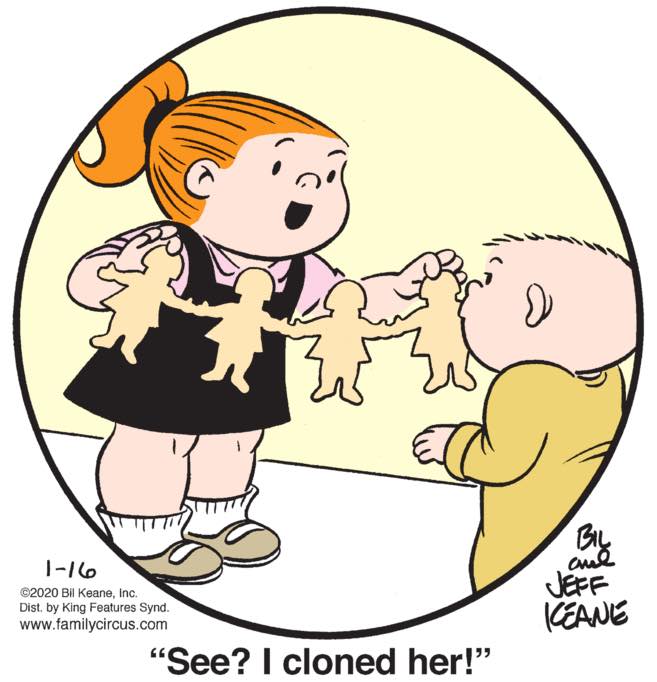 The Family Circus knows how to keep up with modern technology without much effort, simply replacing the earlier punchlines that ran with this panel (“See? I photocopied her” and “See? I bedoubled her once and then again, with the aid of my master, the Devil”) with something slightly more up-to-date.

Oh, now I get why Les was withholding his emotional approval from this project: he was waiting for someone to explain that he could have more unearned praise heaped upon him, in the form of major awards, if it went forward! It’s a good thing that Mason doesn’t think the Oscars are a joke anymore, or, conversely, that he believes so firmly that they’re a joke that he thinks Lisa’s Story can win one, because it’s a sad story about a regular lady who died of cancer.