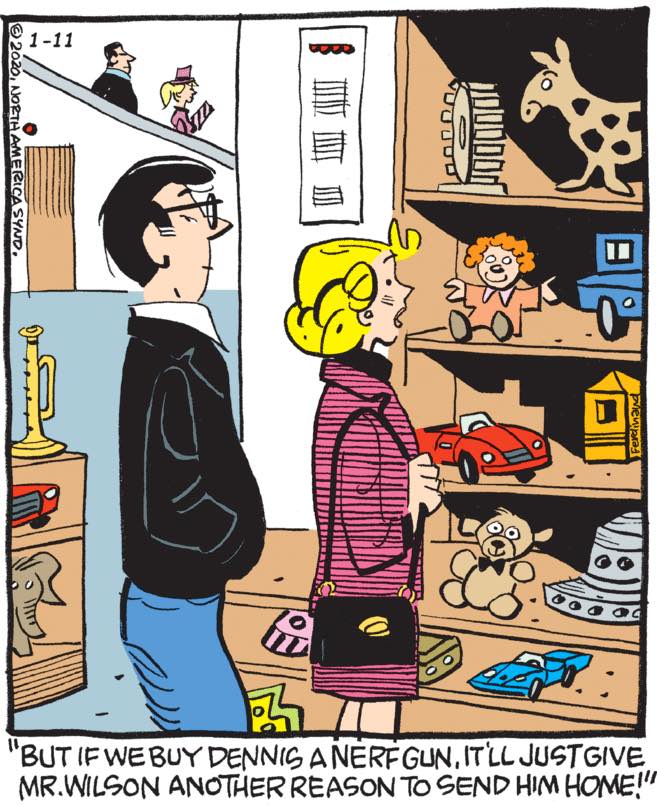 “Admittedly, it’s kind of weird bringing this up while we’re looking at a shelf that doesn’t include any nerf guns — that indeed doesn’t seem to include any toys manufactured in the last forty years at all. Just a bunch of old-timey toys not even in packaging! Almost like this art was drawn at some earlier date and then the caption was grafted onto it. Anyway, it’s a relief that we’re finally admitting that we don’t like spending time with our son and hope he spends as much time at our grumpy old neighbor’s as possible. Like, each of us knew the other one felt that way, but it feels good to say it out loud, you know?”

Hey, remember when Judge Parker Emeritus admitted to doing crimes on TV and then went to jail, but then just a few months later he got out, and I can’t even remember if it was because of more illegal skullduggery or just some dumb technicality, but anyway, now that everyone’s forgotten that unpleasantness, it looks like it’s time for Alan to take his place amongst the town’s rightful leaders again! I certainly hope he calls upon Horace, an old Parker family retainer who you may or may not remember (and really, why would you, why do I remember him, why is so much of my precious, limited brain space taken up by plot points from soap opera comic strips from the mid-’00s) as the guy who ran Randy Parker’s campaign for judge way back when. He was really hot on Randy marrying his fiance, who was the leader of a cult of some sort, which he failed to do, thus giving his opponent the opportunity to start a homophobic whisper campaign against him. Fortunately Horace was there to remind the Parker camp that their opponent’s wife was a drunk, and so Sam and Randy smugly watched her melt down at a press conference and then quietly seized the judgeship that Randy felt was rightly his. Anyway, I feel like Alan’s very public crime-doing will require a lot more dirty-election-tricks help than Randy’s possible homosexuality did, so I can’t wait to see the scorched-earth campaign that’s about to be unleashed.

God bless Mark Trail for being so pure of heart that even though he can’t stand Harvey Camel, he instinctively believes him to the point of having his mind utterly blown when Harvey says “oh, yeah, I definitely saw a yeti, by the way.” I certainly hope the next three weeks are taken up by Harvey telling a long, rambling story, along the lines of “one time a train full of drunken clowns derailed in the forest” and “one time a walrus wrecked a rental SUV by violently giving birth in it“, about that one time he just glimpsed a hairy bipedal cryptid loping through the Himalayan dusk.