Oh, uh, the “Mark parties with influencers” storyline has wrapped up, and I’m not going to describe everything that happened (it was confusing?) but there was definitely punching. Now Bill Ellis is assigning Mark to a new editor who works for a member of Woods & Wildlife’s family of trusted brands: Hot Catch’s print run ended in 2011 and now it’s a blog with six to eight mostly aggregated content items per day, but it does have a freelance budget for the stories that it knows will bring in those clicks. And the W&W audience development team has determined exactly what that magic element is: Mark punching somebody. Will Mark be punching people violating fishing conservation laws, or just punching the fish themselves? 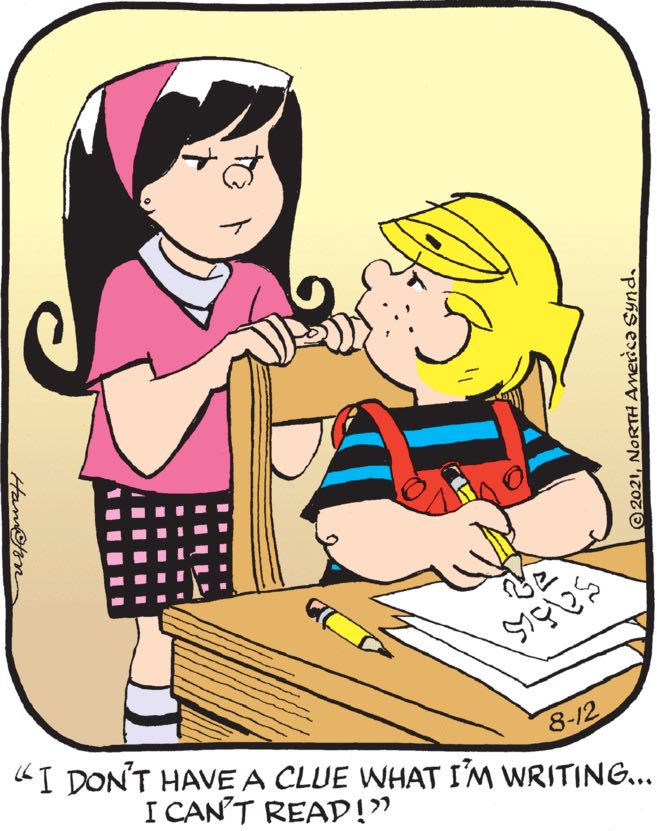 We established years ago that Dennis has achieved at least basic literacy, which raises a lot of questions about today’s panel. Is he doing a gender-reversed version of the thing where girls pretend to be dumb so boys will like them? I leave it to you to decide if the overall terribleness of this strategy is mitigated by the menace to the patriarchy that this particular move represents.

In order for the rhythm of this interchange to work, we have to assume that General Halftrack already has that bottle of liquor in his right hand in panel one, just out of our sight. I was going to say that he was wandering around the house with the bottle, waiting for the perfect setup for him to unleash a bon mot as he poured himself a glass, but based on his well-known disdain for his wife, perhaps any interaction with her would serve as a suitable trigger.

A couple weeks ago we learned that Grimm is dead, and being tortured eternally in hell. “But how did he die?” you probably wondered. The answer is revealed in today’s flashback strip: it’s rabies. He didn’t get his rabies shot, and then he contracted rabies, which killed him.