Is it just me, or does Lou look a little downbeat in that last panel? “I thought he’d say that,” he’s thinking to himself. “But a guy can hope, can’t he? Would it have killed him to give me a little specific feedback on the historical accuracy of my Columbus Day special? Or maybe just praise my creativity and craftsmanship? But no, he’s just going to start shoveling food down his gullet, just like every other time he comes here. I might as well just set out a trough.” 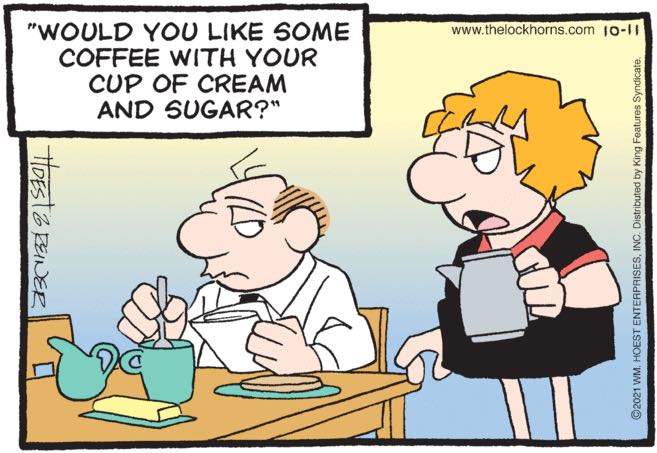 Gotta respect the way the Lockhorns keep their marriage fresh by constantly coming up with new extremely petty bullshit to criticize each other over. At first I thought that stick of butter meant Leroy is doing the “bulletproof coffee” thing, though I guess that’s for his … single tiny pancake? very flat English muffin? bread disk? Whatever, I’m sure Loretta has something to say about that too.

I thought maybe this forest fire bit was a callback to some deep Mark Trail lore, but the last time there was a forest fire in this strip it involved some chump named Wes, so maybe not. Anyway, Mark, Cliff went and fought in a war since last you saw him, what have you done, huh????

TIRED: Jordan and Michelle’s wedding reception is ruined when the shadowy band of soldiers of fortune that Jordan used to run around with decide that he’s a potential liability who must be eliminated

WIRED: Jordan and Michelle’s wedding reception is ruined when Michelle’s dad meets Buck and the two of them just absolutely will not shut the fuck up about roots country legend Truck Tyler