Look, I get it, if you were in charge of a century-old comics property about hillbillies, you’d have the urge to add new stuff occasionally, which is why we get things like Spark Plug’s Grandson Li’l Sparky. But I refuse to believe that I’ve been reading strips about the tiny, insular hamlet of Hootin’ Holler for more than a decade at this point and this is the first I’ve heard about one of the main characters having a twin sister! Yeah, they have been playing tricks, Loweezy … playing tricks on me, the reader, by pretending they’ve both been living in this town all along! And I don’t appreciate it.

“Iris. You know, my friend, Iris? The one who got married here today? Looks like it’s time to ship you off to that facility I’ve already picked out; fortunately I tricked you into signing that power of attorney form a few months back.”

The thing about puns is that the worse they are, the better they are, making them completely immune to criticism, and the thing about having a syndicated newspaper strip is that if you think of a bad pun, you can draw a cartoon of it and get paid. I’mnot saying I like today’s Six Chix, but I do have to respect it.

This whole week in Dustin has been about how Dustin’s dad wants to relive his high school glory days as a pole vaulter, and his wife is just absolutely furious about it. It’s been pretty annoying and dull, but I do kind of like today’s strip, in which we learn that, despite being a loathsome jerk, Dustin’s dad has hidden depths, like a strong desire to break out of his boring, safe, middle class existence, possibly by dying.

In other annoying and dull things that have been happening this whole week, Zak and Iris’s wedding ceremony has been both boring and drama free. I know we’re all disappointed to see Wilbur though-ballooning positive energy at his ex instead of getting drunk and making a scene, but I do like the juxtaposition here of him, Mary (thought ballooning platitudes, as is her wont) and Dawn, who is experiencing no thoughts at all, just vibes

New Gil Thorp writer Henry Barajas promised on Twitter back in September that Milford’s annual bonfire was coming, and yet football season came and went without it — so it shouldn’t surprise us that that football season ultimately ended in failure. Now, with the school district apparently unable or unwilling to provide the official school-sanctions bonfire we’re used to, the teens of Milford are taking matters into their own hands, holding a forbidden, booze-soaked backwoods bonfire to try to salvage basketball season at least.

What do we know about Hootin’ Holler? We know that its inhabitants are desperately poor and largely isolated from the national and global economies, and what little economic activity that does take place in the community is centered around subsistence agriculture, illegal alcohol manufacturing, and stealing chickens. If Bonnie Mae couldn’t figure out that this is a bad place to run a fancy-pants “boutique,” that’s on her.

Oh, man, look at the shift on Jughaid’s face between panels here. His relationship with Mary Beth is generally of the stereotypical “girl has crush on boy but boy is a just a bit too young to have crushes” you see in newspaper comics, so it can’t be her affections that he’s considering. No, he’s truly absorbed the lawless culture of his family at a young age and is positively gleeful to learn that even the other rustics of Hootin’ Holler consider him and his kinfolk animalistic savages, like the vicious … cow? This metaphor needs work, admittedly, but when you’re a bunch’a wild animals like the Smifs, you don’t care much for “metaphors.”

The Milford player getting bumped out of the way in panel one (and doing the STEAL!ing in panel two) is in fact a high school junior, which is I guess the source of the insult the Forest View player lobs at him in panel one. Do teenagers consider straightforward descriptions of what grade they’re in to be insulting? I wouldn’t know, I don’t talk to teenagers and I don’t care to. Honestly it would be funny if “junior” is meant to be insulting just because the Milford player is a teenager generally, since the Forest View player is, by all appearances, in his mid to late 40s. 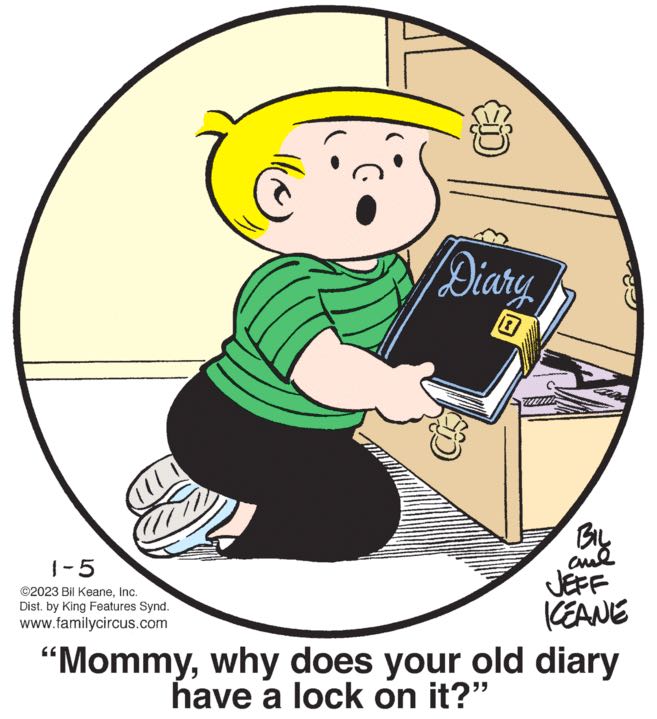 Nooo, Billy, that’s the evil tome with the spell that Summoned you and your siblings! The lock was put on because four of you is all our reality can handle, do not unlock it under any circumstances