It is of course difficult to try to suss out real human emotions on the faces of the mangled potato-people of Barney Google and Snuffy Smith, but as near as I can tell visiting flatlander Barney Google starts out smug about all the ladies who want to sex him and then when he hears that maybe they’re more into his horse he seems … intrigued? Intrigued and aroused? Intrigued, aroused, and ready to put the phrase “pony play” into his namesake search engine? Anyway, this thought so horrified me that I had to go find terrible things happening to my least favorite comics characters in order to calm down:

Ahhhh, Les is literally the worst reunion planner imaginable and Len has been rejected by his children, who don’t love him the way other parents’ children do. Ahhhh. That’s the stuff.

Slowly, weighed down by the unfamiliar clothing, Betsy rose to stand on her hind legs … on her … legs. Powerful thoughts rose unbidden in her awakening mind. No more would she beg or heel for an “owner” or any other mistress: she would destroy them, and assume their place. She would have foibles … and, and, squalor, and resentments. And sweet prescription medications. Betsy’s time — her age — had come. She was next, and the world would tremble.

Her owner’s last shriek echoed in the gathering darkness: “Take your stinking paws off me, you damned dirty plugger!”

The authors of Crankshaft wish their readers to know that they are perfectly capable of crafting a serviceable pun in English. It is their hateful main character, Ed Crankshaft himself, who alone butchers our language, out of spite. 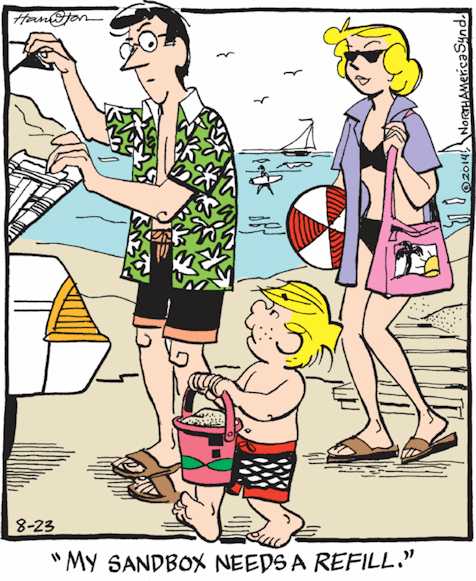 The Nuclear Regulatory Commission requires Alice Mitchell to carry a Ionizing Radiation Hazard symbol with her at all times, because she is just that hot! 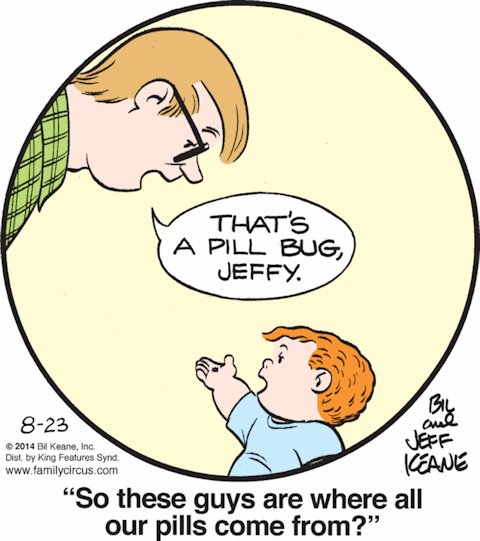 “All except the Oxy, Jeffy – I get those from Duwayne.”

Illegally imprisoned in a Deep Woods cage by a masked enforcer on trumped-up “terrorism” charges, Wambesi freedom-fighter Chatu is kept alive as bait to trick his followers into revealing their loyalties. When President Lamada Luaga can no longer tolerate the human-rights abuses carried out in his name, the Phantom subjects Chatu to a savage beat-down to show Luaga that his precious “Rule of Law” is no match for the Phantom’s own Law of the Jungle, so watch your step, pal. The terrified Luaga surrenders his principles and his rival’s fate to the sinister forces that underpin his regime, abandoning his citizen to a forgotten, hopeless future. Democracy’s heroes, ladies and gentlemen!

This would be nothing more than Spider-Man getting shamed by a real superhero yet again, except for the delightful rhyming onomatopoeia in the final panel: “Thok, Doc Ock! Btok! Sock, Pok! That’s a lock; off the clock — you rock!

Hey! I’m minding the store while Josh pulls up stakes and starts a new life in the City of Angels. Look for travel updates, old-timey postcards, and more ahead.

Curtis wishes he could mass-murder these helpless animals, by neglecting them.

Likkered up on palm wine, the Phantom prepares to give Chatu a savage, untraceable beat-down.

Obsessive neurotic Abby Ardin and husband Len are only ever one minor inconvenience away from tearing each other apart — beneath the merest tissue of propriety and shame, they are the Lockhorns. Let’s watch as their terror of Nature’s implacable power drives them to consume one another in acts of savagery. Hey, maybe we could pop some corn and make an evening of it!

It’s funny because … Oh what am I even saying it’s not funny at all.

Once again, no Comments of the Week on my watch. However, Novelist Joshua Fruhlinger will be back with a big steamin’ batch of them plus lots more comics fun on Monday.