You know, Allen-era Mark Trail already upgraded Rusty from “ward” to “son” so I was wondering if he’d be retconned into a biological child of Mark and Cherry under the new regime, but with all this talk of dark secrets and Mark’s cloned lineage, and now new-look biker dude Doc wondering how Rusty will think about their relationship going forward … well, I’m just going to assume they’re all clones, and now they’ll just address each other respectfully as “pod-mate”.

I’m assuming that “sex, drugs, and rock and roll” is in quotes here because Rocky’s just using it as a general stand-in for “I used to have fun and/or cool,” not because he’s had sex. Nobody in Beetle Bailey has ever had sex. Please, I desperately need to hold onto that notion to stay sane. NO SEX IN BEETLE BAILEY, I FORBID IT.

This pair of criminal masterminds hasn’t exactly set the world on fire with their crime skills, so I think it’d be pretty fitting if Daisy slipped and fell back onto Yeti and they both fell into the sewer and drowned. Dick never spots anything on the drone cam, the meteorite goes unmolested, everyone just kind of moves on with their lives. “Hey, we ever figure out what was up with those people who fell into comas?” Chief Patton asks. “I don’t think so, chief,” says Dick. “I guess it was just one of those things.”

If you, like me, find Harry Dinkle intensely unlikeable, I’m happy to inform you that he spends his nights writing in agony, thinking of his past failures. 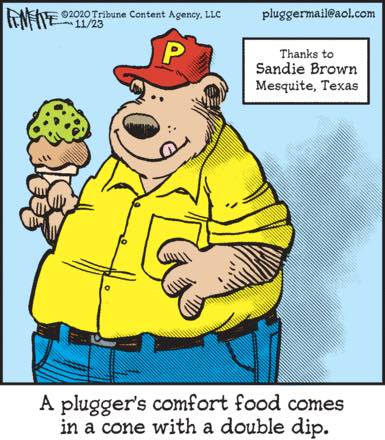 Damn it, pluggers. Do you … do you really think you’re the only ones who like ice cream. Come on. Come on now. Give us some pluggers-specific content in the Pluggers syndicated newspaper strip or give it the fuck up Welp, I guess Hagar the Horrible is thoroughly cementing Lucky Eddie’s mermaid-focused sexuality into strip canon. In today’s installment, we learn both that Eddie has attempted without success to conform himself to society’s idea of who he should fall in love with (mammals), and also that, no matter how much Hagar’s family and warband have thrown in with the newly arrived Christian religion, they still have to deal with the occasional pagan diety, especially when they fuck said deity’s daughter. 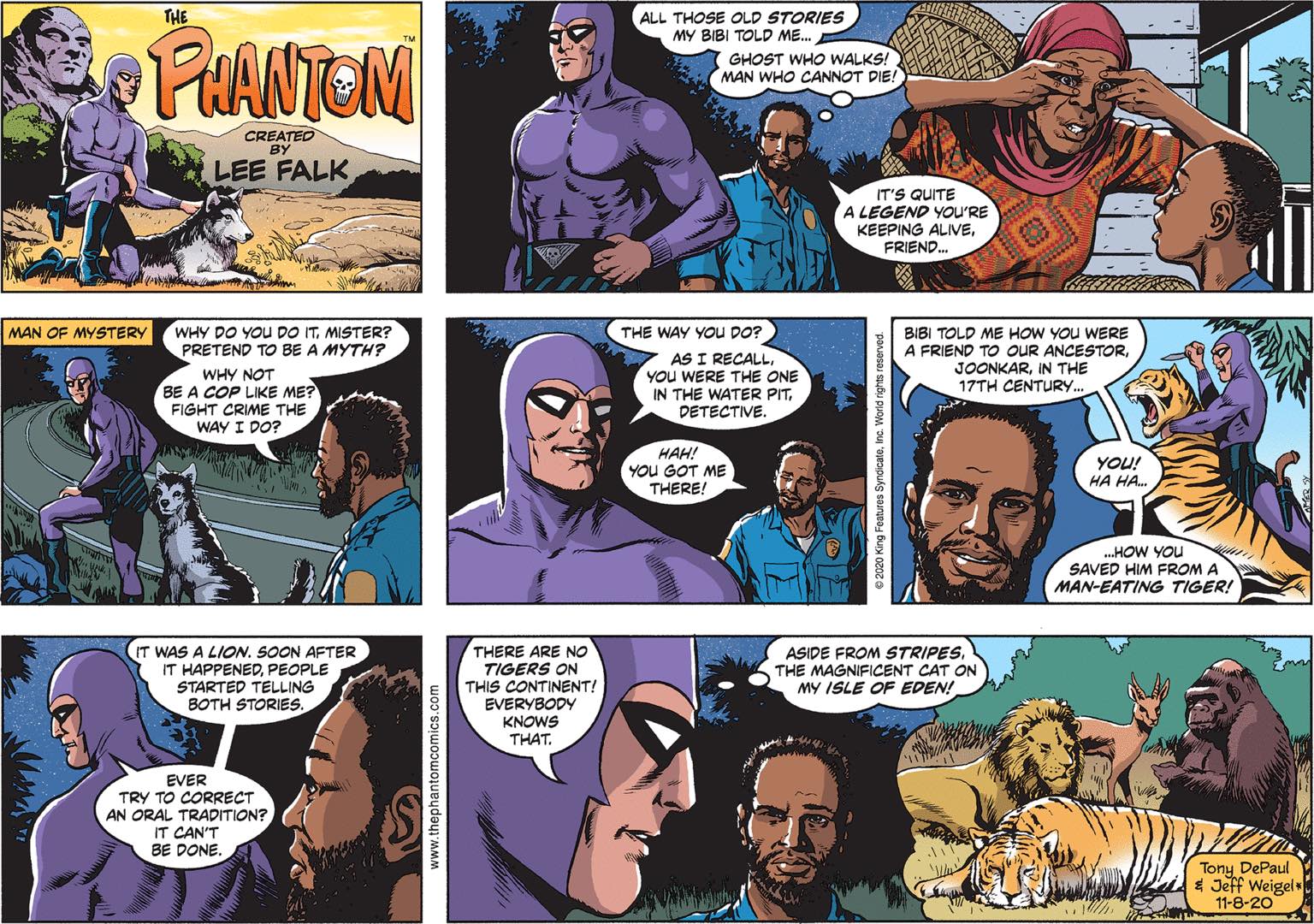 The current Sunday Phantom plot features our hero helping out a Bangallan cop who appears to be the one person outside his inner circle who realizes that the “Man-Who-Cannot-Die” bit is obvious flim-flam, and good for him! Today we learn that the Ghost-Who-Walks not only stores the priceless historic heritage of many cultures in his non-temperature-controlled cave, but also hoards the world’s biodiversity on an island optimistically called “Isle of Eden” but where nevertheless I’m reasonably sure a certain amount of endangered-species-on-endangered-species carnivorism goes on. I of course have always assumed that due to the weird chronological discontinuities brought about by comic book time, we’re meant to understand that Beetle walked into a recruiting office in 1951, just like he did in the strips that ran in 1951, and has stayed in the military ever since. But today’s strip seems to have updated the timeline a bit, with Beetle and Sarge (?)’s teenagerhood now having taken place in [squints] the ’80s? Sure, let’s say the ’80s. This still presumably makes Beetle the oldest living serving private in the entire U.S. Army, but at least it’s not that improbable that he’s still alive.

Oh snap it’s Kelly Welly, everybody! Real Trail heads remember Kelly, who was sadly absent during the James Allen era, as one of Mark’s greatest foils, always trying to simultaneously steal Mark’s stories and get into his pants (or Bill Ellis’s pants, or the pants of whoever might help her write her next story). My friend Kaycee brought her to life years ago in the unforgettable Mark Trail Theater.

Anyway, while I think new-look Mark Trail has sometimes been a little too aggressive on the “look, we’re different now!” front, in the long run if the strip isn’t going to remain an anachronism, it has to come up with answers to the questions of “What would the Mark Trail characters be like if they lived in the year 2020,” and I think “Kelly Welly is a brash, nature-focused Instagram influencer” is absolutely a correct answer to that question.

You know what’s never going to change, though? Marvin, a comic strip that features babies chatting amicably about what kind shit-innable undergarments they’re wearing, They’re chatting about it now, and they’re going to keep on chatting about it, forever.