I apologize for my commentary yesterday in which I claimed that Dick Tracy would not want to get to the bottom of this whole non-violent bank robbery situation. In fact, there’s nothing Dick would like more than to put these smarty-pants computer-using cyber types in jail, and if they’ve been doing crimes with their IBM PCs, well, that’s just a bonus. I respect the understated way that the Cinnamon Knight, whose whole deal is that he dresses up like a knight from the late middle ages, explains that cyber crime is “not his speciality,” because you can’t stab it with a sword, I guess. 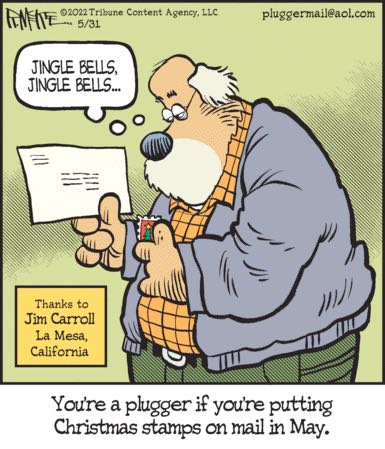 Man, the combination of “Jingle Bells” being in a thought balloon, the slouch, and the plugger’s heavy-eyed expression sure adds up to a lowkey grim panel. “Jingle Bells,” thinks the plugger tunelessly, thinking about how these days Christmas is about the only thing he can get excited about, with the lights and church service and family all around, while the rest of the year just feels more and more difficult to take, and we’re about halfway between Christmases and it’s hard to imagine holding on for another year but I guess this utility bill isn’t going to mail itself, “jingle bells.”

My intense study of the post-animalpocalypse world of Slylock Fox has been ongoing for sixteen years now, but every day we are still learning new things about how this society works. For instance, as we humans understand law and justice, Slylock is surely an agent of the government: he works directly for high regime officials, and has the authority to both investigate and prosecute crimes. Yet here we see him in the process of investigating insurance fraud, something that in our own economic system would be considered a civil matter. This hints that their government and law enforcement have a broader reach than ours do: maybe the regime believes they have an obligation to protect corporate bodies against harm just as they protect animal citizens against violence, or perhaps the insurance industry is itself wholly state-run rather than in the hands of private entities. These are rich avenues for study and more than justify the renewal of my academic research grant, so hopefully that check will be coming my way soon.

Sometimes, when you’re the producer of a media product that’s been running literally since the Wilson Administration and whose whole main shtick is a fairly problematic series of running jokes at the expense of some of America’s most economically desperate citizens, you need to spend a week or so getting new readers up to speed on your characters and letting them know why they should care about them. For instance, did you know that Snuffy Smith refuses to help around the house, and is also deeply in debt? Tune in this week for eight more endearing (?) facts about this dwarfish, potato-nosed rascal! 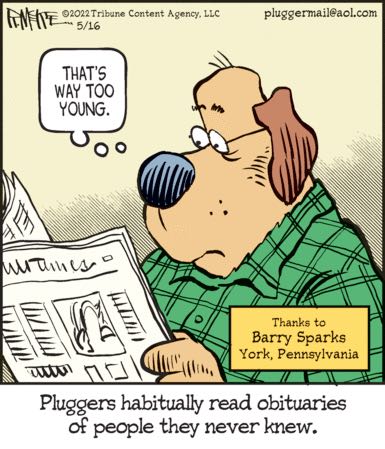 Pluggers cannot bat away the constant, intrusive thoughts about death, because they’re aging and physically declining and will themselves be dead soon. That’s it! That’s the whole joke!

As readers of this blog well know, I like that Thirsty has in recent years been allowed to once again be the moderately functional alcoholic he was intended to be when this strip launched in the ’50s. Sometimes this is the crux of the joke, but sometimes it just adds to the strip’s flavor. Like, it’s funny that Thirsty is standing next his friend like, “Doing a chore, huh? Couldn’t be me” but it’s funnier that he’s probably had a buzz on since about 10 am.

I certainly hope that Helen has slipped her resignation letter under the door of the School Management office and is heading out of Santa Royale forever tonight. How could you ever show your face around town if people knew you held lifelong feelings for Ian? Toby, of course, is far beyond human shame now, but Helen must still have a shred of dignity. 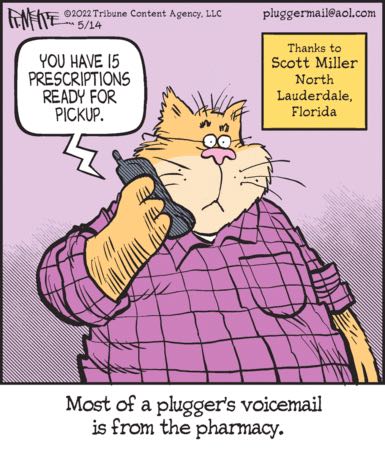 You’re a plugger if your life isn’t worth living anymore because the only people who still talk to you are the ones coordinating the elaborate series of pharmaceutical interventions necessary to keep you alive.