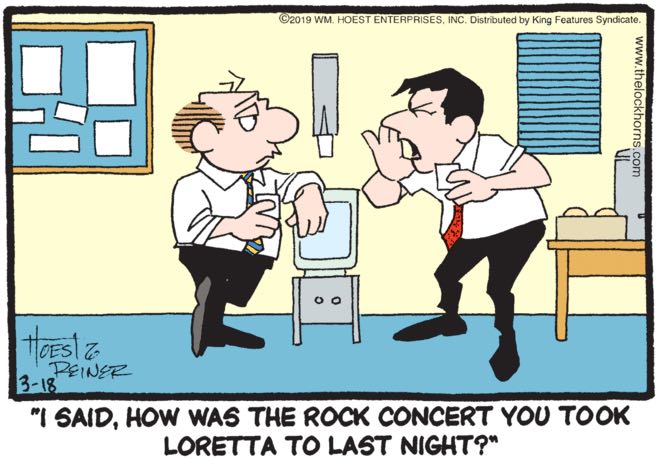 OK, so I’m actively angry that, somewhere in the conceptual murk of the Lockhornsverse, Loretta and Leroy went to a rock concert (side note: “rock concert,” lol) and all we got out of it was this dumb joke about how concerts are loud and can affect your hearing in both the short and long term, which could’ve involved any generic set of characters? I have so many questions, about the genesis of this scenario, and specifically how it played out for the characters in this strip who we know and love. Why didn’t we get to see the escalating series of mutual passive-aggressive dares that led Leroy and Loretta, whose cultural consumption generally doesn’t go beyond movies or, very occasionally, the opera, to get outside their comfort zone? Was each of them hoping the other would hate it so they could feel smug about it? Did they see some big-name arena act, or did they go a little club to see some indie band so they could make fun of hipsters together? Deep in my heart, I hope they went and saw The Mountain Goats, and during the double-encore performance of “No Children,” Loretta reached out for Leroy’s hand without looking at him, and Leroy took it.

You know, it’s a common sentiment to say that each of us only has a limited time on this earth, and so we should live every moment of it to the fullest; but for me, I think that some of the banal, everyday experiences that many would call a waste of time are the true, quiet core of a life well lived. That’s why I respect that Newspaper Spider-Man, whose creative team presumably got more than a week’s notice that they were being cancelled, is resisting the urge to go out with a big, splashy, dramatic ending; instead, we’re apparently going to get several days of “Peter Parker vs. the TSA,” which is not only boring as shit, but has been done in this strip at least three times already. In one of his previous run-ins with airport security, Peter got bailed out by Obama; I feel like the current administration will be significantly … less forgiving.

Rex Morgan really is hitting those classic Rex Morgan tropes: first someone gave Rex stuff for free for no good reason, and now he’s just gonna lounge around mostly naked, giving readers the occasional taste of beefcake they’ve come to enjoy. I assume the news report will be about how Annoying Hawaiian Shirt Man, who we last saw getting arrested after he made an abortive attempt to steal the ham radio operator’s jeep, was technically still under sky marshall jurisdiction when he committed his crime and will thus be shipped off to Guantanamo Bay to be held without trial indefinitely. The towel well fall away as Rex becomes aroused when learning about this tough but fair comeuppance; nevertheless, he will not smile.

“OK, I’ll go first! You’ve told me all about Libby; what was your first pet named? I loved all the stories about your mother — what’s was her maiden name? What street did you grow up on? What are the last four digits of your Social Security number?”