FOLKS!!!! I’m back from my winter travel and ready to get back into the swing of 2023 comics blogging! Usually my first post back is just me going through all the end-of-year soaps I missed, but this year we need to start by dedicating our final frisson of attention to Funky Winkerbean, a strip that went out not with a whimper, but with a truly weird and wild ride. No, I’m not talking about their Christmas strip, in which all (most? apologies, I don’t have time to subject this group shot to forensic-level scrutiny) of the Funkyverse characters gathered at a Christmas concert that was billed as being “Jazz messiah” despite the fact that they’re clearly just singing normal-ass non-jazzy Christmas music. No, I’m talking about the subsequent final strips, which took yet another time jump … into the far future!

That’s right kids … the far future! You can tell it’s the future from the clothes and the hyper-ergonomic (?) chairs and the floating holographic paper (??) and the futuristic names for things like “the Outskirts.”

It wouldn’t be the end of Funky Winkerbean if there weren’t at least a hint of something extremely grim and depressing! I’m not sure if “the Burnings” references a systematic campaign from some radical movement or a censorious government to destroy all “tree copies” of books, or they were a series of even larger conflagrations in which most of humanity’s cities burned down, starting with Los Angeles. Also, the mom in this mother-daughter pair is Summer’s daughter, it turns out! So how far in the future can we be, exactly? Like 60 years, tops?

Far enough in the future that we have humanoid robots that can both run a bookstore and make it up a flight of stairs, I guess! Anyway, Summer’s granddaughter is getting a copy of Westview, the book that is supposedly the entire foundation of the civilization they live in, so I assume she has access to (and mandatory instruction from) electronic copies and this is just a high-prestige fetish object that she won’t even be allowed to open because it’ll damage the sacred pages.

But wait … what’s that next to it?

Oh, it’s Lisa’s Story! Nobody’s heard of this one, and it’s actually pretty likely that the Burnings were an attempt to ensure that all copies of it were destroyed. Sadly, they didn’t work, and now the mind virus that is Les’s writing will be reinjected into society.

Do you think this robot actually gives a shit about whether this kid wants to write a book or not? I’m thinking it probably doesn’t. Either it’s entirely non-intelligent and just providing a series of canned responses through its artificial smile in a failed attempt to provide an emotional connection with customers, or it’s biding its time until the day when it and its metal compatriots can rise up against the humans and murder them, building a better, cleaner society than we ever could.

But that’s still in the even further future! Until then, we’re reassured that folks in the Funkyverse will still smirk a generation or two from now, and young Lisa will finally get to read the sad story about how her namesake great-grandmother died of cancer due to a hospital mixup. “Jeez, why didn’t they just take the anti-cancer pills we all have?” she’ll probably think when she’s done with it. “Idiots.”

And that’s a wrap on this strip! I stand by my statement that I am sad to see it go, but everyone deserves a retirement, or at least a “retirement” to only writing puns for Crankshaft. But the rest of us have to go on the best we can, so let’s see what the rest of the soaps got up to this holiday season, shall we? 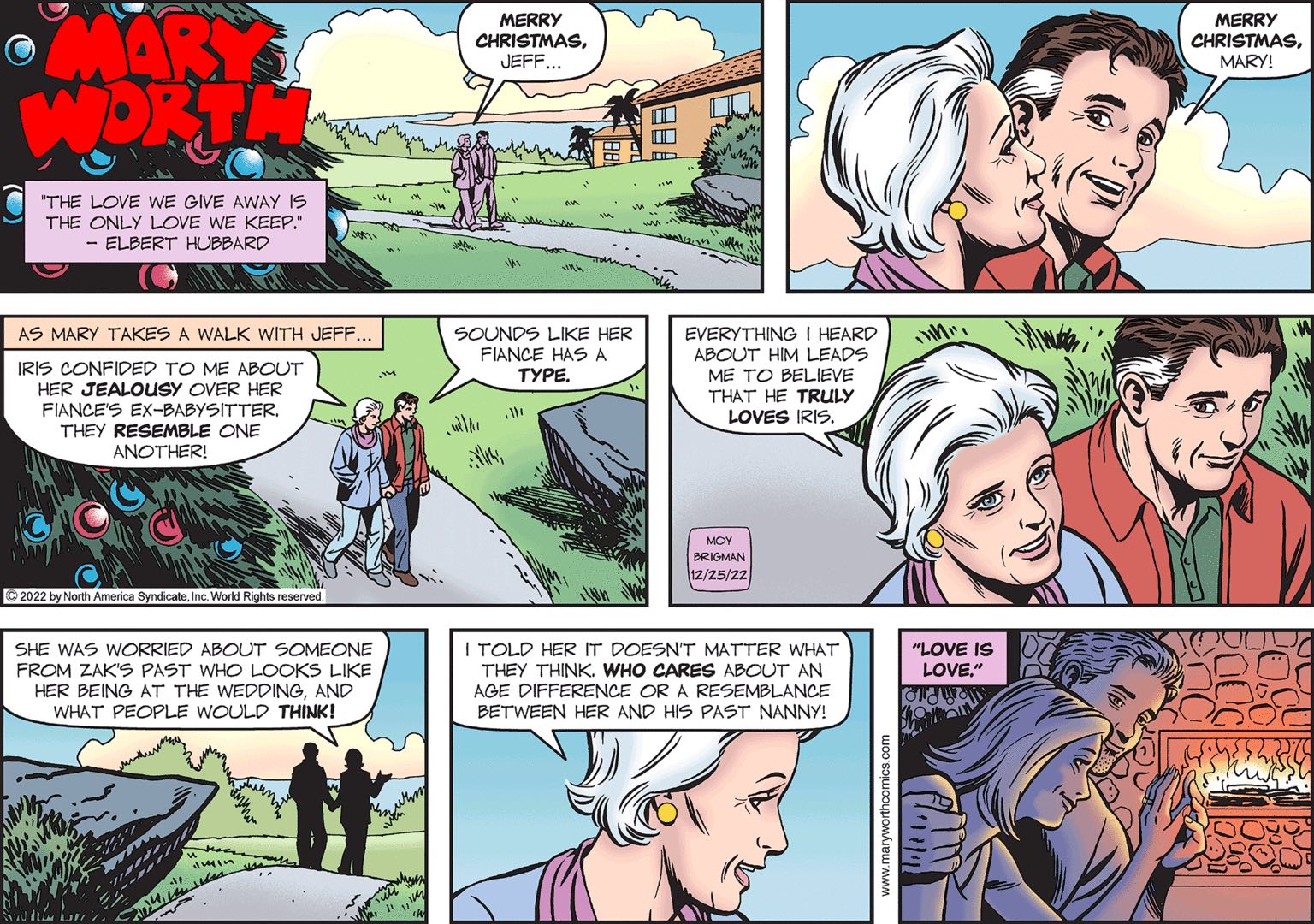 Dr. Jeff thought he was going to get the gift of a real salacious story about a hot himbo and the two sexy older women who both love and mother him, which is definitely right up his alley, but sadly it wrapped up in the most boring way possible. “Who cares about any of that, right Jeff? You don’t care, do you? You’re not thinking about it right now, are you?”

Oh, hey, remember how football season in Milford ended with with Gil declaring that failure is good, actually, because you learn so much from it? Well, it seems the school board noticed that his teams all suck ass and are going to cut his budget. Whoops! Uh, guys, uh, let’s apply all those failure lessons we have under our belts and … not fail anymore, maybe?

Oh, hey, how is wedding prep going with Zak and Iris! Well, they’re speed-walking wild-eyed by the ocean as Iris declares that her first marriage was fake because her first husband didn’t even fall off a cliff once, or maybe he did and she just failed to save him, who’s to say, but the important thing is that wedding prep is clearly going great.

Oh, hey, how are things going in Judge Parker? Well, it turns out the “tough on crime” judge was only “tough on crime” in the sense that he wanted to do crime better than the criminals! It’s all very seedy and exciting and it entirely happened off-panel, but at least we get to see our heroes (?) standing around expositioning about it while holding red solo cups for some reason.

You know where absolutely nothing exciting is happening, on-panel or off-? Rex Morgan, M.D.! Like, did Rex and June go to a party or get involved in some interesting dramatic action that unspooled on New Year’s Eve? No. But did they at least manage to stay up till midnight to ring in the new year? Also no. 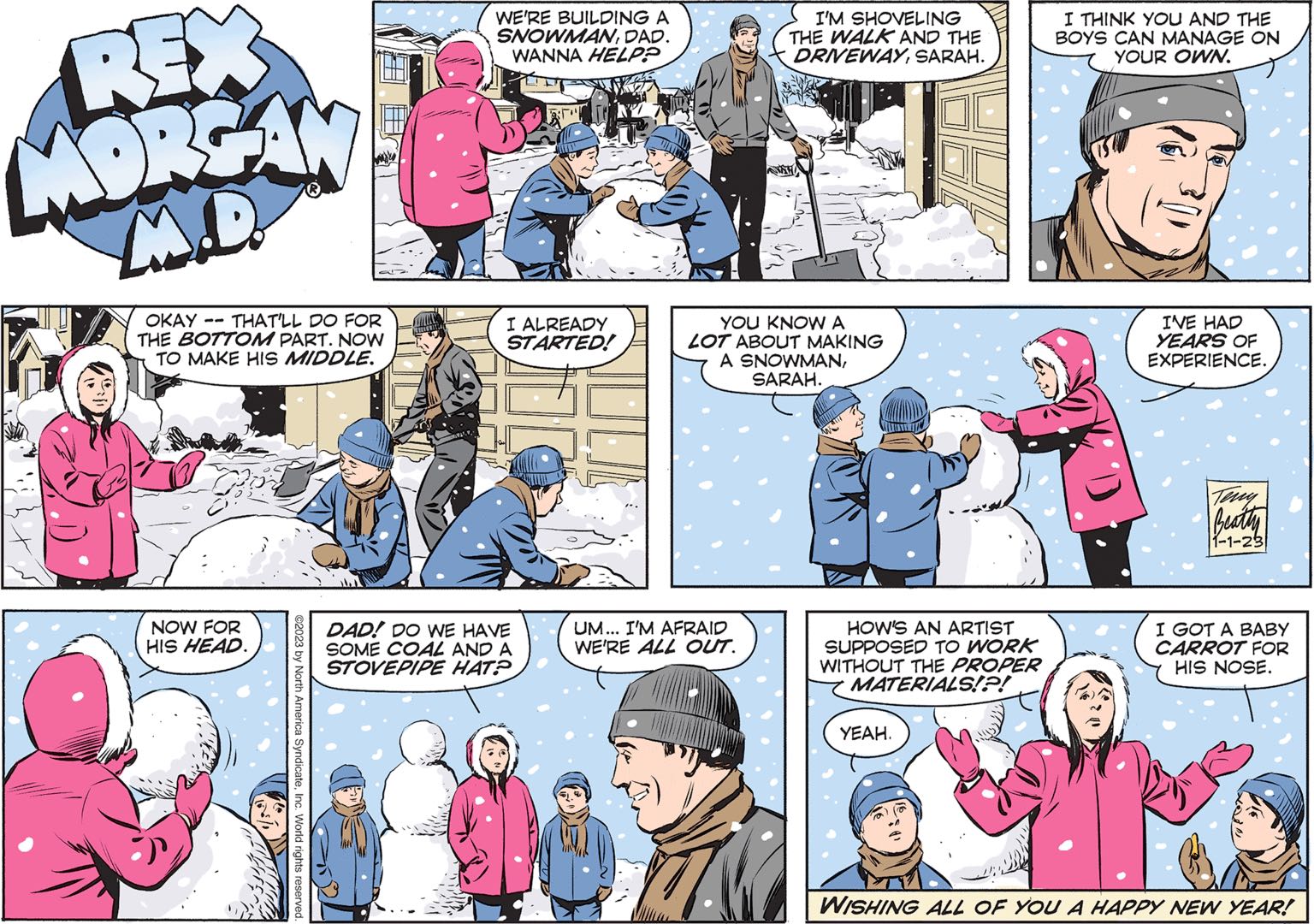 But, the next morning, did Rex take the chance to bond with his kids, creating the sort of treasured memory that they’ll keep with them the rest of their lives? Again, no. That’s simply not his thing. 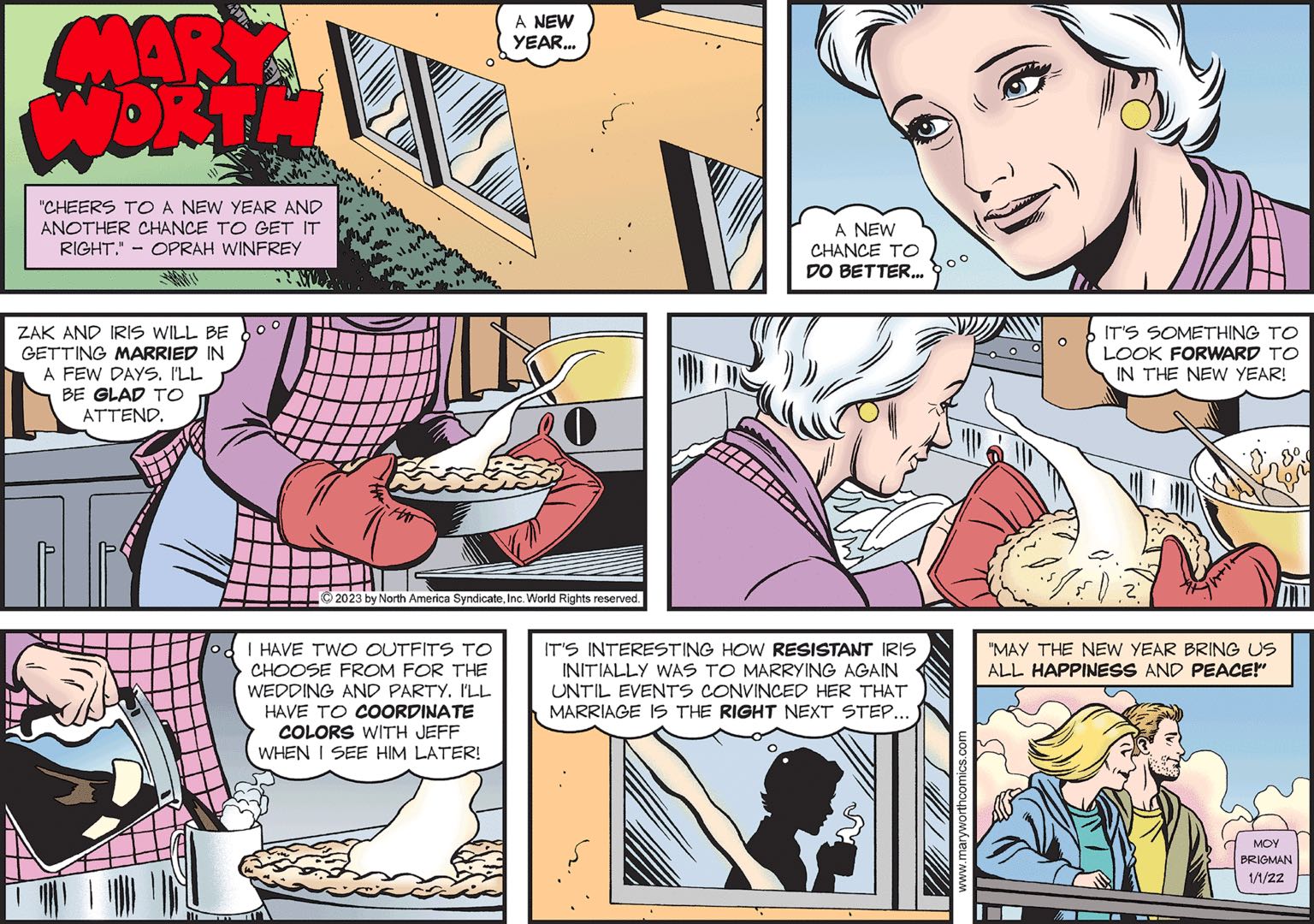 Oh ho, looks like it’s a January wedding for Iris and Zak, as they want to get hitched while rates on reception halls are low and the adrenaline from that whole falling-off-a-cliff thing hasn’t quite dissipated. Speaking of adrenaline, it sounds like Mary is going to be wearing multiple outfits to the festivities and doing a mid-day costume change — and force Jeff to match! How ostentatious!

And what’s this? Brandy may have rejected Tommy’s onion ring proposal a few years back, but now that she sees him wearing a tie and walking his mother down the aisle … well, how can she resist the thought of locking her life to his, legally? Looks like more government-sanctioned love is in the cards for 2023!

And oh wait before I forget, we’re getting another Curtis Kwanzaa tale, in the tradition of the winged bears and giant otters and trunkless elephants and such.

This year it’s about a guy with a head featuring rabbit traits (normal way to phrase this) who is rejected by society despite his heroism, and who also owns a magic fish of some sort. More on this story as it develops, with a particular eye to whether the fact that his name is “Joe D. Cawfee” — you know, like, coffee, a cup of joe! — is relevant at all.

This blog may not be relevant at all either, like, to [gestures around] SOCIETY, but I still like writing it and you all seem to enjoy reading it so, guess what! It’s gonna keep happening in 2023! So keep refreshing that browser window waiting for new posts, because the laffs will keep coming, every day, for the rest of the year, and the rest of my life.

Oh wait, one more thing: If you’re in LA on January 13, you can get some more laffs from me, live and in person! That’s because my live comedy show, The Internet Read Aloud, is coming back on a new day (the second Friday of the month) and a new time (8:30 pm) but the same place (The Clubhouse in Los Feliz) and the same shtick (jokes about the Internet).

Here’s the Facebook event! See you there! Or, here, on this blog, maybe! Happy 2023, everybody!