I know, I know: Judge Parker has been absolutely bonkers for the last month and I’ve been AWOL on it. To be honest, I’ve had a hard time coming to grips with just how I’m supposed to feel about the wacky tale of Sophie’s cheerleading coup, and the constellation of forces that are coming together to bring that about. I’ve been suspicious of her move to seize the cheerleading captaincy from the start, not least because of my experiences as a high school nerd and outcast. Because, when I was taunted and humiliated by socially elite members of the football team, I never dreamed of winning the quarterback’s position as a result of some complex calculus involving my heretofore undiscovered skills and my antagonists’ poor grades; I just wanted the football team to die, in a fire.

So anyway, I’ve been kind of hoping that Sophie would pull off some absurdist stunt at cheerleading tryouts that would completely undermine the legitimacy of cheerleading as an institution in the minds of her high school classmates. But instead now we are confronted with Sophie’s Long Study Hall Of Despair, when we learn that she really has wanted to cast off her lilac pantsuit all along and seize the mantle of Queen Bee of Whatever High. More to the point, she’ll presumably buck up after this little pep talk and manage to leap and twirl her way to improbable victory, with the support of her incredibly wealthy parents, two celebrities who are on her side because they want to purchase a horse from said wealthy parents for millions of dollars, and the school administration, proving that those nasty cheerleading moms are entirely correct in all their accusations.

I’ve always assumed, based on the gross incompetence of most of his schemes, that Count Weirdly graduated dead last in his class at Mad Science Academy, and yet here he is at the controls of what appears to be a fully functional combination time machine/hover-bubble. Of course, I’d have a human factors engineer look at that control panel before he starts mass-manufacturing these for production — hope you enjoy your visits to the years 2, 9, 3, 27, 10, 6, 41, and 29, kids!

More troubling, though, is the sight of the Count and Slylock and Max laughing it up together as they voyage through time to snicker at a doomed race. Could their long-standing and constant animosity be a front for some deeper scheme or grift? Or did Weirdly first make a solo voyage to the past in order to change history and create a new timeline in which he and the detective team were best buds? It would be rather poignant if all he ever wanted in all his scheming was real friends. I couldn’t really tell you what these comics are supposed to mean, because Dilbert is using words I don’t understand and the Lockhorns is using phrases that I’m pretty sure the writer doesn’t understand, but I’m worried at the underlying implication, which is that the U.S. government, alarmed at declining tax revenues during the recession, is looking to audit high-earners and is targeting cartoonists. Faulty intelligence again, I’m afraid.

“Also, he shat himself, but I think that’s just because he was drunk.”

Hey! It’s Labor Day in the US, Labour Day in Canada, and late summer all over the Northern Hemisphere — a great time to kick back, relax and recalibrate the ol’ work/life balance.

I’ve worked in just about every environment I can think of: classroom, lab, shop, on the road, retail floor, cube, office — even a few grim days in the Tokyo hive-warrens of a Japanese manufacturing giant. And let me tell you, I’ve got a grip on my home-office desk like Immanuel Rath’s in Der Blaue Engel.

Even though most comic strips are produced by work-from-home types like me, they reflect a pretty broad range of work environments: 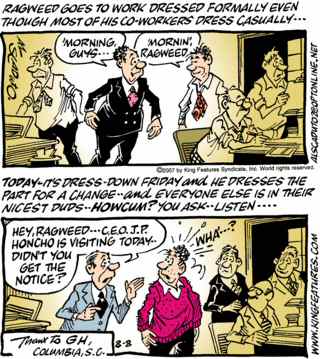 This reprise strip (from faithful reader gh!) shows a roomful of desks — could be anywhere, and any time from 1900 through the late 1970’s. Of course, since it’s TDIET, bet on earlier rather than later.

Dilbert is famously based on author Scott Adams’s experience in the vast cube farms of Pac Bell (formerly ATT, now — through the miracle of mergers and acquisitions — ATT). Here, we see contracting in action.

With long hours, close quarters, and young workers, work and social boundaries blur — My Cage, by faithful CC reader Ed Power with Melissa DeJesus, seems to capture that vibe, at least to the satisfaction of someone with no exposure to the demographic.

And the simmering warfare between retail clerks and customers doesn’t seem to have changed much over the past 30 years. Hey! This one’s based on a submission by long-time reader Adah – way to go! Soon, all comics will be written or submitted by CC readers, and will exist only to mock other such comics! At that point, we will implode.

Now, here’s somebody with the right idea, and I’m going to take it — no more posts until the Tuesday comics are up — promise! Go have some fun!

Some comics get trapped by success. They build a big audience with a new message – professional women are insecure, cubicle life is tough, Southerners are people too. But their audiences develop expectations the authors are afraid to disappoint. So they stop taking chances. Creatively, the comics stop growing and die, often at the peak of their popularity. But they don’t go away. They keep going and going and going and merciful Heaven why don’t they stop stop just freakin’ STOP YOU HEAR ME CATHY I’M TALKIN’ TO YOU!

Everybody admires giants who walk away at the height of their game: Gary Larson, Bill Watterson – have there been any others?

But credit two authors trying to revive franchises that died long ago:

When he gives Jon Arbuckle a life, Jim Davis pushes Garfield out of the frame. And that could cost him a lot of desk calendars, MylarÂ® balloons, and suction-cup car toys. I don’t like Garfield, but I’m not the one keeping Davis in lasagna. So: bold move, pal. Way to go.

I owe Karen Moy a debt. I have followed Mary Worth since the freaking Kennedy administration without seeing a centimeter of character development. Now, in just six months, Mary is the center of the story, out of Charterstone, and showing the faint beginnings of self-awareness – even self-doubt. Baby steps, maybe – but steps. Thank you, Karen Moy!

Trapped between a huge, dim, slavishly-devoted audience and a self-satisfied, ham-handed Stalinist author, this strip is creatively as dead as they come. Yet it will run on and on as a Frankenstein’s monster stitched up from Mike’s mewling brats and zombies from the Good Old Days, glued up with glop from that “novel.”

But suppose somebody wanted to make it good — and without losing the current audience. Could they do that? How?