Well, pretty much all the newspaper comics have caught up with social distancing, personal protective equipment, and the whole shebang. No more escape from reality for us!

In this Slylock Fox prequel, it is only the animals’ disciplined hygiene that protects them against the plague that wipes out careless, inconsiderate humanity.

It’s ironic: the cheerleaders conceal their hotness to ensure that only the hot survive. Also, those outfits look hot, though not in a hot way.

Too grim? Then let’s all come together as a nation to tell this chirpy usurper that the one and only NOAA mascot is always and forever Mark Trail.

Nah, he’s still right behind you.

Charles Darwin once inferred the existence of a moth with an 11-inch proboscis from an orchid with an 11-inch nectary. By that same principle of complementarity, I infer that the 22nd Phantom will be [trumpets] Heloise Walker. Well that and the fact that I’ve been ‘shipping her for this for fourteen years.

A legendary hero/ine must have a nemesis, and Kadia Sahara is clearly emerging as Heloise’s. Kadia has:

A couple of details need to be worked out, not least of which is there are now TWO terrorist masterminds imprisoned by the Walkers: Chatu in Wambesiland and Eric THE NOMAD in Gitmo. But it’s easily resolved: The Elder Phantom frees them both to “let them settle it” or some such nonsense; they fight it out for control of the organization; Chatu wins (have you SEEN that guy?); Kadia sneaks up and kills him in her supervillainess-defining moment, and takes over. Then Kadia knocks off Elder Phantom, Heloise swears a blood oath, young Kit takes another bong hit, yadda yadda yadda. All hail Kadia, THE NEWMAD.

An earlier, incomplete version of this post appeared early yesterday morning because I scheduled it to the wrong date. That’s right, I literally forgot about 9/11.

Classic misdirection — the weed is under the mattress. And he probably smokes the banana peels, too. 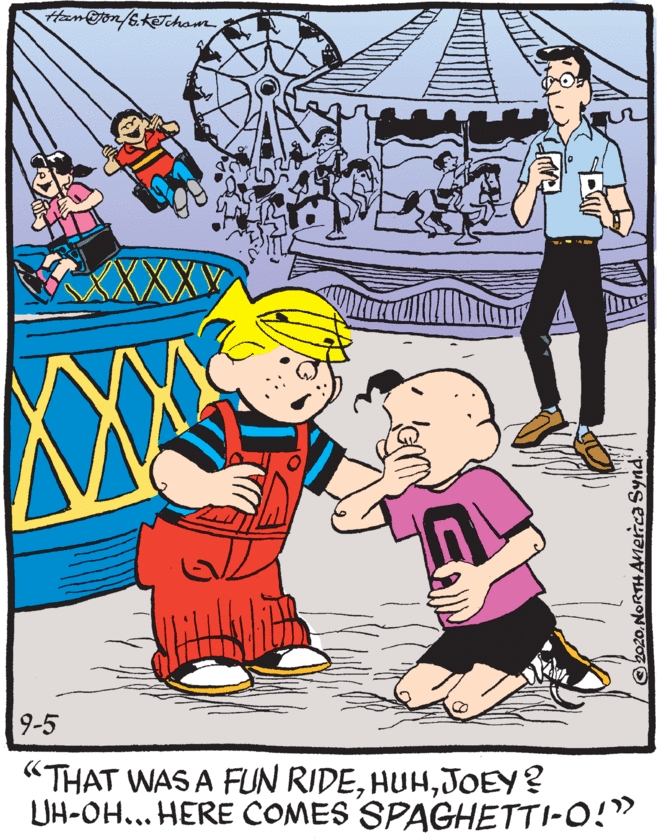 Using his media platform to trash a hallowed American brand: pretty menacing! You can almost hear him growl, “You’re next, Sara Lee.”

In the sex-based economy of 9 Chickweed Lane, the unit of currency is the Boink. But after 12 years’ relentless overcopulation of the money supply, that currency has become utterly debased.

And by, “the planet,” I mean, “whatever is in my field of vision right now.” [To self] “I wonder where people go when I turn my head.”

Still more useless word-gunk. If this Producer gig doesn’t work out, Ellen can get a job in Corporate HR anywhere in the World.

I am totally asking Aunt Lumpy’s stylist to give her some of that awesome sea-hair!

Oh c’mon people, this show should obviously and entirely be about April Bowers-Parker. Norton is comic relief, Godiva’s dead foot showed up in one frame, and her vengeance-crazed Austrian producer/druglord/CIA-stooge boyfriend didn’t even rate a name. Neddy? Two lines and a Supporting Cast credit as “Entitled Girl,” best case.

And don’t forget that Neddy and Ronnie rewrote the script to April’s specifications at gunpoint. April put “her truth … her life” in Neddy’s hands, demanded Neddy not disappoint her, and threatened murder if the studio made revisions to the script. So if this doesn’t turn out to be April’s story, Neddy’s gonna die, ’cause April’s nuts, yo. All in all, pretty terrific television!

But does any of this matter to Neddy? Nope. I wouldn’t even be surprised to see her set up a hit of her own, to stop more interesting people from stealing all that sweet attention.

I’m delighted to learn Mort Walker isn’t really dead, but alarmed that his human form is being eradicated line by line in some afterlife purgatorium while his creatures grin and wave.

And Walkers, change either that “Ghost Who Walks” tagline or your family name: “The Schwimmers” has a nice ring to it!

Hello, faithful readers! I’m letting Josh out of quarantine for a well-deserved break through Sunday the 13th; reach me at uncle.lumpy@comcast.net if you have any problems with the site.