What’s that, you say? You worried that somehow the idea of making fun of newspaper comics had gotten old to me, your Comics Curmudgeon? That I would quietly slip away from it as the new year began? WELL GUESS AGAIN, BUDDY! Like the holidays we just endured, comics-mocking is a cherished tradition around these parts, one that will keep on happening indefinitely. Speaking of cherished traditions, how did our favorite comics characters spend their Christmases?

Mary and Jeff spent the holiday as they usually do: staring down in smug, silent satisfaction at the mound of presents under sort of in front of Mary’s Christmas tree. Presumably these are gifts from Mary’s many admirers and meddlees. She hasn’t and won’t open any of them, as it’s the act of submission that counts, not whatever no doubt tawdry trinket lies beneath the wrapping paper.

Meanwhile, Gil and Mimi Thorp are spending their Christmas according to their own tradition: partying on a double date with Coach Kaz and his girlfriend Kelly, and hoping that nobody brings up their children, who we haven’t seen in years, and are probably dead at the bottom of a shallow grave while Gil and Mimi enjoy the benefits of their kid-free lifestyle (the aforementioned Christmas Day partying) instead of watching kids unwrap presents or whatever.

We’ve known for a while now that Dick and the MCU gang were going to be tangling with hippies … but a whole commune full of them? I think I speak for both hippies and squares everywhere when I say this conflict will be “far out, man.”

Did you imagine that Walt Wallet, the protagonist of a strip that ages its characters more or less in real time but also has been running for more than a century, might finally be allowed to achieve the sweet release of death this year? Well, bad news: he’ll be burdened by another year of life, symbolized by this grinning, needy baby.

Dick Tracy has decided that in order to catch a hippie, he needs to think like a hippie, by which I mean, as Sam’s heavy-lidded floating head in panel two makes clear, that he’s dropped some acid that he found in the evidence room.

“Saul could use the human companionship,” thinks Mary, quickly drawing her curtains so Saul can’t make eye contact with her.

Hey, have you ever wondered what kind of pervy facial expression Slim would make if he contemplated dabbling with the nudist lifestyle? Well, I guess this horrifying strip is your fault, then, you sicko.

Hey, I’m not the only one pledging a full recommitment to my bit in 2021! Funky Winkerbean is doing the same thing. In this case, the “bit” it’s recommitting to is “wildly maudlin self-indulgence.”

Oh, man, I have not been keeping you update on the retconned lore being spooled out in Mark Trail, but here’s the gist: Mark/Cherry/Rusty/Doc are a self-contained little family pod in Lost Forest because they’re estranged from their Florida-based families (Cherry/Doc fled from her trailer-park-based, borderline personality disorder-afflicted mom and Mark turne his back on his dad who conned (?) Mark’s childhood friend’s family out of their farm). But I thought it was important to tell you, as 2021 begins, what Mark wants you to know: speedboats hurt manatees. They hurt manatees, damn it.

Our hero the Phantom has completed his rhino-assisted beatdown and was about to do a few extrajudicial murders until his luchador comrade got cold feet about it, so now he has to be like “Ha ha, this was just a comical misunderstanding! I was going to take them out … to lunch, where I was going to explain to them that crime was bad, that’s all.”

Wow, it turns out these modern hippies have put down their reefer cigarettes long enough to read the Fourth Amendment! Looks like this case is gonna be tougher to crack than Dick thought!

I’m sure the basketball-season Gil Thorp storyline will get wacky at some point in the near future, but it would be kind of funny if instead of the usual teen antics the whole plot this year was just “the boys basketball team sucks ass at playing basketball.” Gil has dipped deep into his bag of coaching tricks to try to turn things around, and apparently the best thing he could find in there was passive-aggression. 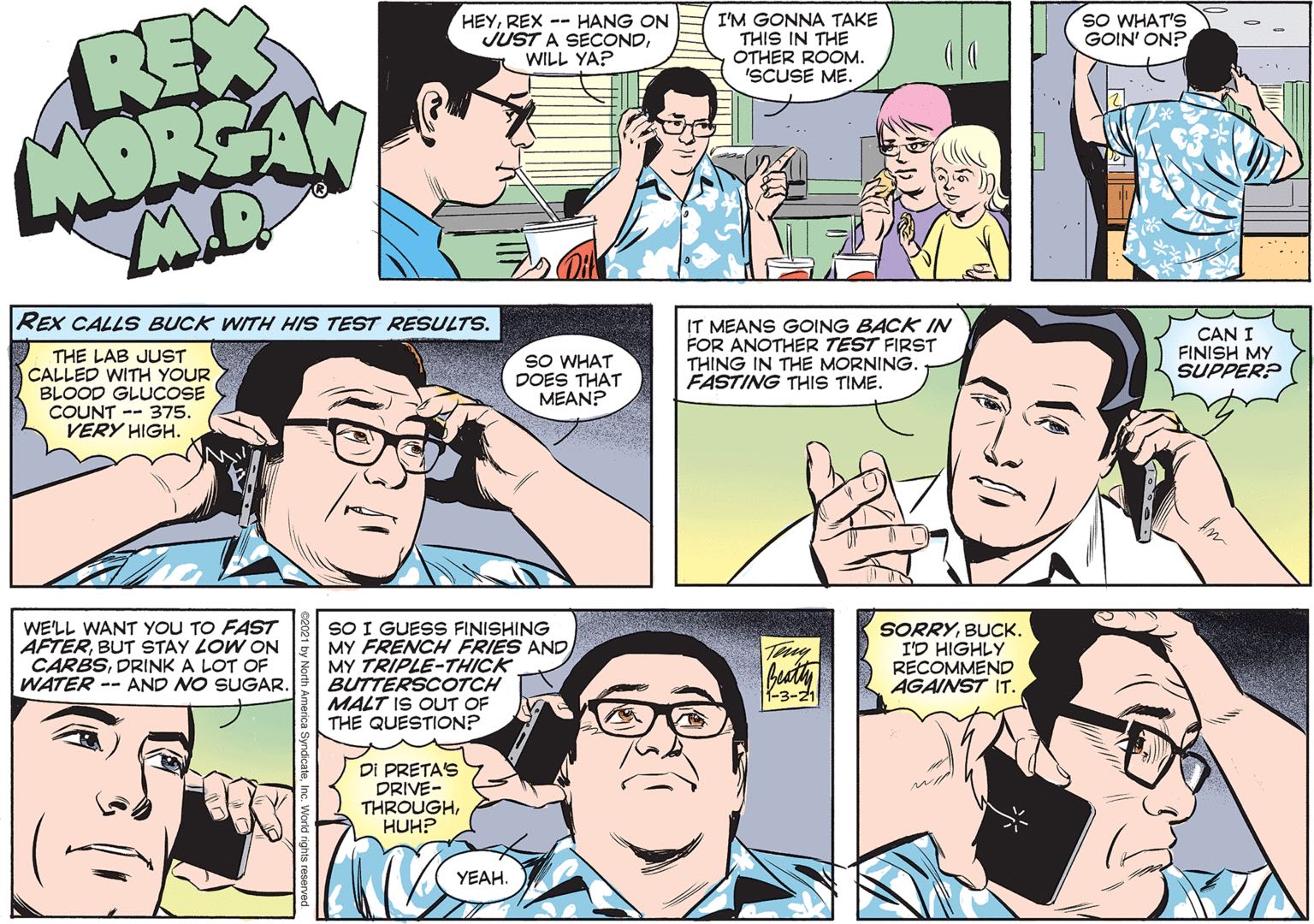 I do find it genuinely amusing that Buck has become the repository of All Things Bad (But Not Too Bad) That Happen To Rex Morgan Characters. Like, couldn’t the dude have gotten the sad news that he definitely has the diabeetus after he enjoyed one final giant fast food meal? Apparently this strip withholds small pleasures from its characters just as it withholds them from us.

AND! ALSO! If you need more evidence that 2021 is starting right, this holiday season featured the return of another beloved tradition: The Curtis Kwanzaa Storyline! Curtis used to do this annually, and it used to be extremely nutty, with bat-winged bears and telepathic otters and such; more recently these stories got more intermittent and a lot more lame, with plots about social media and this thing with the mask, I don’t even remember what that turned out to be about. But what will this year hold for us, and Mr. Arthur Skritch?

Oh, hey, is it a trunkless elephant? Heck yeah, that’s the sort of nightmare beast that I’ve been lead to believe by previous Curtis Kwanzaa storylines that Kwanzaa is all about!

Arthur sees this magic talking animal and immediately assumes it’s going to grant wishes of some kind. If there’s one thing I know about magic wish-granting animals in folklore, it’s this: those wishes are going produce some ironic results, which might also be fatal!

Huh, I guess the wishes are just going to be fulfilled by … good advice on interacting with your fellow human beings, maybe?

WHAT ARE YOU TALKING ABOUT MY DUDE YOU’RE AN ELEPHANT WHO DOESN’T HAVE A TRUNK BUT CAN SPEAK ENGLISH AND ALSO LIVES IN NEW YORK, I THINK THAT’S PRETTY DARN MAGICAL!!!!!

Anyway, more on this plot as it develops for the weird, I promise! I hope you all had a good holiday season and are ready for more comics fun in 2021, because I’m gonna deliver it whether you like it or not!

Oh, and one more note: if you missed your chance to vote in the annual Worthy Awards, good news: voting in the coveted Panel of the Year Award was so close it’s come down to a run-off election! Check out the rest of the winners and help determine if 2020’s panel of the year goes to Tommy’s onion ring proposal or Greta slurping up Madi’s sweet tears!