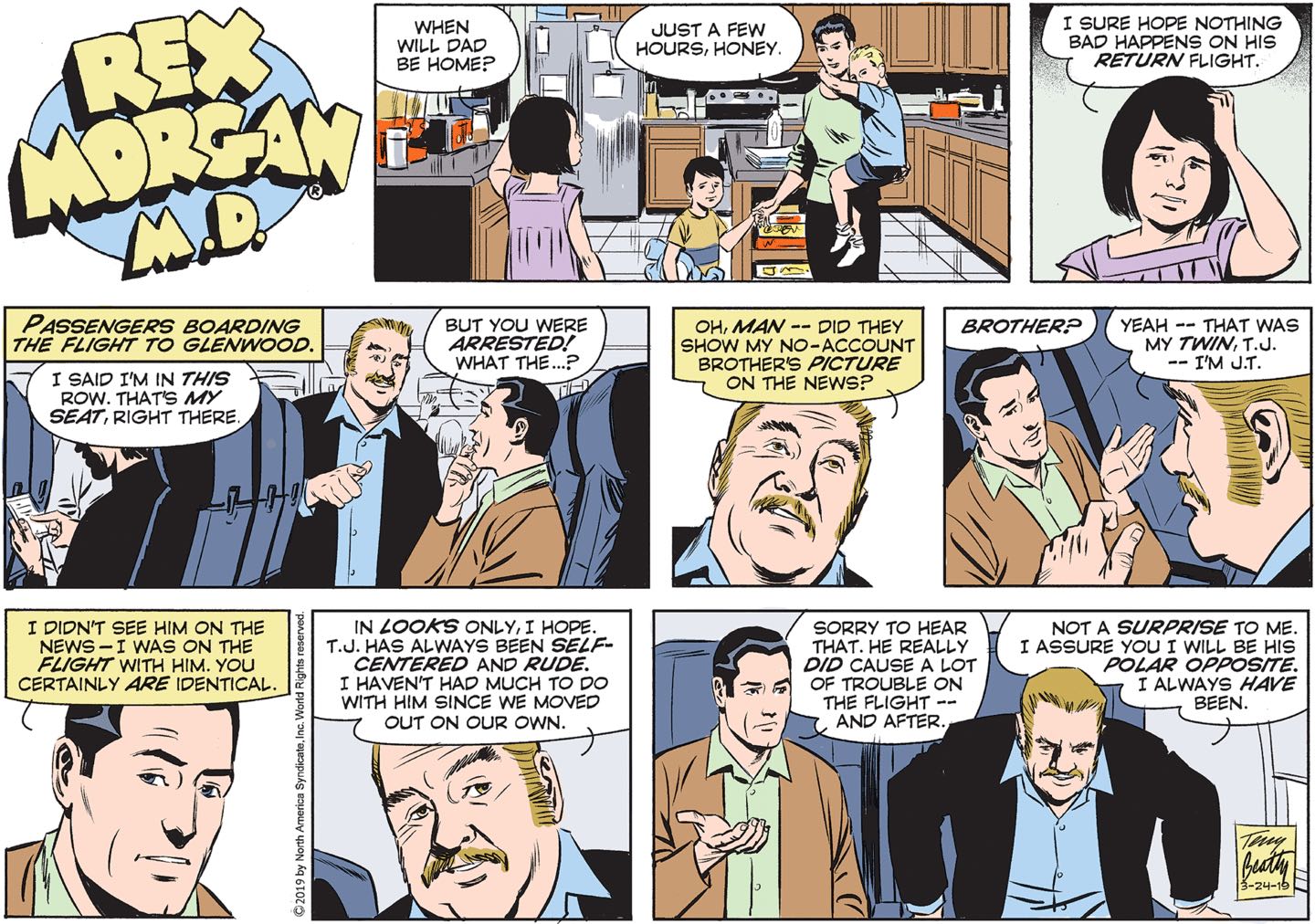 Oh my god, shoutout to Rex Morgan, M.D., for pulling off the first weird plot twist that I didn’t see coming a mile away in years. I’m not sure which possibility is funnier: that crude lout T.J. really is the evil half of a pair of identical twins and Rex is about to have an extremely civilized conversation with his brother on his flight home, or that T.J. was so embarrassed by his own behavior and subsequent run-in with the law that he’s made up a wildly improbable story about being someone else. 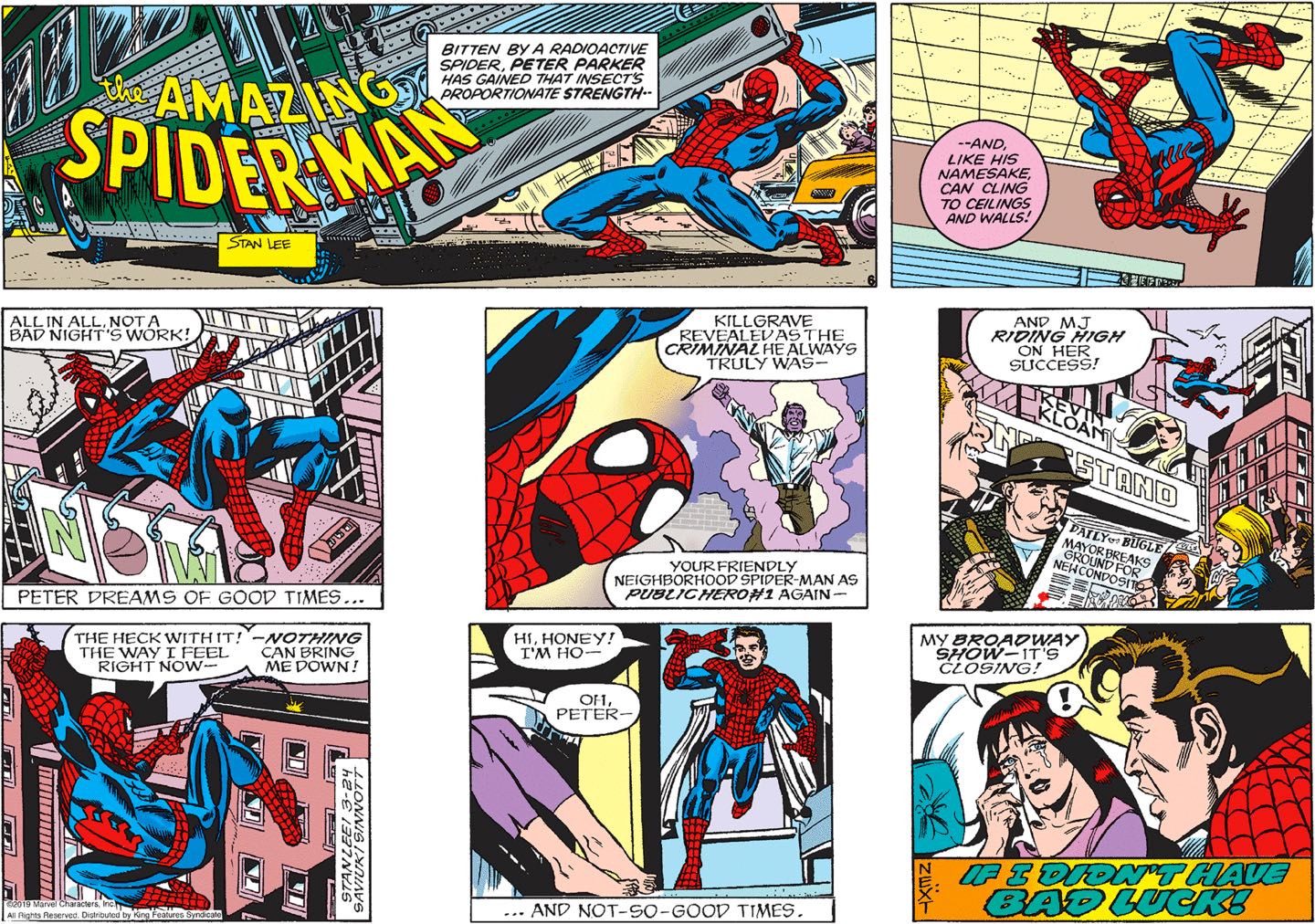 Whoops, you guys, I misread that article somehow and it’s actually today that’s the last day of Newspaper Spider-Man. Sorry if I made you mourn prematurely! Anyway, this is an amazing final strip, I think we can all agree. Again, there are two almost equally hilarious possibilities. One is that the ousted creative team, out of a sense of professionalism, decided to do a final strip that quickly resets the last 30+ years of continuity so that today’s strip will flow seamlessly into the coming reruns, setting aside for the moment the fact that a minute ago the Parkers were on their way to Australia. The other is that the writer and illustrator have simply come to feel as much contempt for this iteration of Spider-Man as I do, and wanted to ensure that, when the curtain closes on his universe, he’s left in a state of misery and poverty. 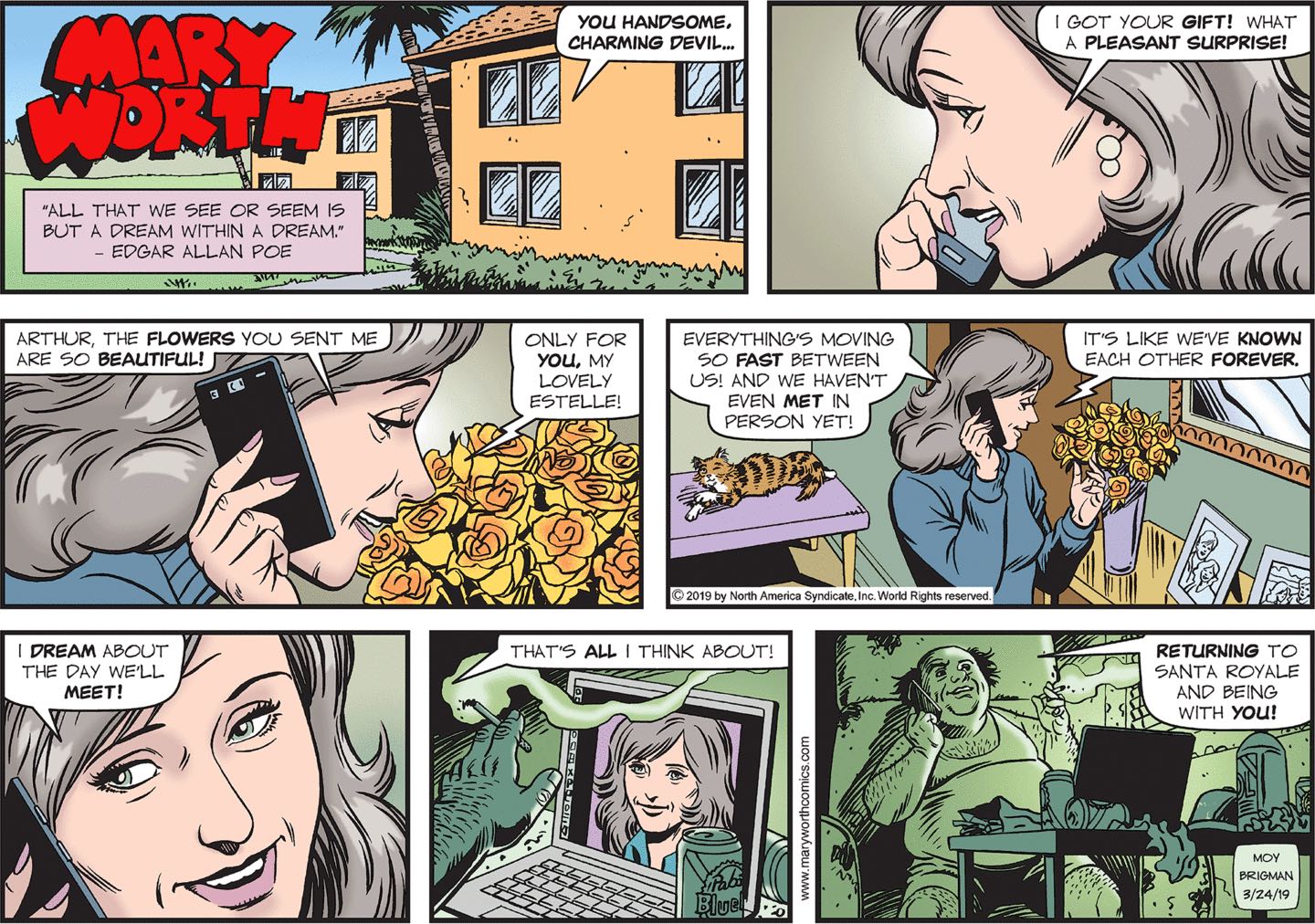 Oh my goodness, “Arthur Z” is really … beloved TV star Danny DeVito? This is quite the scandal. What will Rhea Perlman think?

Much as I make fun of the Family Circus for blatantly rerunning cartoons, I do enjoy some of the older ones just to catch a glimpse of the ways everyday life was different 30 or 40 years ago. There are a few nuggets embedded here — that people’s dogs used to just roam freely around upscale suburban neighborhoods, for instance, or that heavy-duty wooden crates were standard moving gear. The biggest tell that this is from another age, of course, is that Dolly is sitting in this kitchen at all. “Where’s Dolly?” Thel wonders as she looks out the window. “Enh, must’ve wandered off again. She probably can’t have gotten very far — not on those stumpy little legs!”

I know that the inhabitants of agricultural communities are more prone to be “early to bed, early to rise” types than us city folk, but it’s a little weird that Snuffy and Loweezy are all snug in bed and it’s broad daylight outside, right?

Welp, here it is, folks: the last in the current run of Newspaper Spider-Man! This feature, which began its run in 1977, ends like this: Peter and MJ are going on vacation. And that’s it! They’re not even on vacation, they’re just talking about how much fun vacation is going to be. The only real closure we’re getting is that Peter seem to have finally gotten over his endless macho panic about MJ making more money than him. Congrats, Peter, you and your wife now have a true partnership! She makes the money as a movie star, which gives you the freedom spend your time and energy fighting crime. Oh, what’s that, you’re going to Australia and never coming back to fight crime again? Well, enjoy! Hope your next newspaper incarnation is slightly less dumb and pissy!

Mary Worth has been telegraphing “ESTELLE IS BEING CATFISHED” with decreasing subtlety all week, and I think today’s strip really seals it. Not only does “Arthur” not know how to spell his own name, but instead of chatting with Estelle on the balcony of his suite at the Four Seasons Kuala Lumpur, his voice is coming at you from some dark room with a laptop and a dirty table that sports a plebeian can of Pabst Blue Ribbon.

I like the fact that the phone is on speaker, because it implies that there isn’t just one “Arthur,” but rather she’s being catfished by committee, and they all need to hear what she’s saying so they can put their heads together and come up with a suitably romantic response. They started out in it for the money, but now they’ve really come together as a team and are increasingly excited by how good a job they’ve done as Cyranos!

There’s a classic Mark Trail strip that’s somewhere in my archives that I spent way, way too much time just now trying and failing to dig up, in which a villain pledges to reform his ways and immediately goes off panel and shaves his beard, much to Mark’s approval. (If you can find the link, please email it to me, I love it so much!) Anyway, I guess the Rex Morgan, M.D., equivalent is to discard your garish clothes and swap them for a sensible, muted jacket-and-shirt combo. Not a tie or anything, you’re not putting on airs, but this is a way to show that you’ve been “scared straight” and are ready to rejoin civilization!

(UPDATE: Thanks to faithful reader Rita Lake for finding the strip — it’s here, and it’s spectacular.)

I think we should definitely listen to Jughaid when it comes to the food that he knows his body needs. Look at his discolored tongue! That’s presumably due to a serious vitamin deficiency.

I am, genuinely, done making fun here. If Newspaper Spider-Man wants to spend its last few days in the media landscape engaged in utterly pointless bait-and-switches over readership expectations vis-à-vis whether or not Peter is or is not wearing his spider-costume under his shirt, then I say go for it. One of the very first sequences I went through that really taught me what this strip was all about came in 2005, in which Peter’s undergarments were or perhaps were not a problem, with the changes having nothing to do with Peter’s own on-panel efforts. My point is that this feature is going out very much on its own terms. We should all be so lucky. 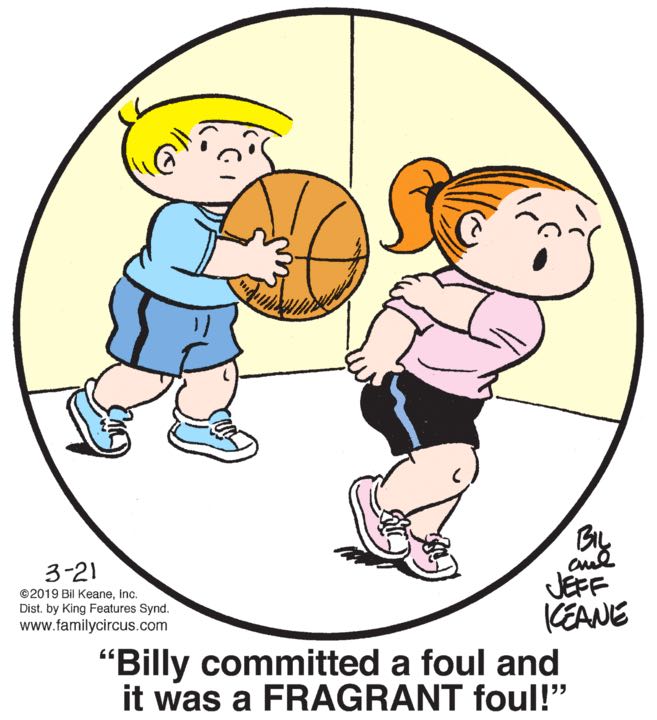 One of my least favorite Family Circus things — and lord knows there’s a list — is when some semi-universal cultural touchstone unfolds in real life, like the Olympics or the NCAA basketball tournament, and we’re expected to believe that the Keane kids can’t stop pulling catchphrases from it. It took me a second to notice that Dolly is rubbing her arm here, indicating (I assume) that Billy hit her with the ball, or maybe just punched her and then quickly grabbed a ball so that he could say “I didn’t punch her! Both my hands are clearly occupied in holding this ball!”; before I realized that, I thought maybe he had just farted.

I’m not really a “sports guy” so I sometimes I find myself in the position of wondering what it is that’s confusing me about Gil Thorp: the sport content or the trademark choppy narrative. Like, today, I don’t get why the idea of a scrimmage seems so freighted, and I don’t understand half of what Gil is talking about in panel two. But I do sincerely hope that panel three takes place nine days later, that the scrimmage drama was resolved to everyone’s satisfaction, and that the phone call Mimi is wrapping up here is acknowledging that and we never hear anything else about it.

“It’s your case too, Joe. Go ahead, rifle through the drawers and get your fingerprints all over everything. Take a dump in the middle of the floor! Nobody can stop you!”