As you may know (and if you don’t buckle up because you are about to find out), I love etymologies. So, here’s a fun fact! In German, the word for “prince” (in the sense of “a sovereign ruler regardless of other title” rather than the sense of “the son of a king”) is “fürst.” Etymologically, this word means, quite literally, “the first,” as in the foremost person in the state; “fürst” and “first” also have the same etymological root, and are basically pronounced the same way, but because English always has to be fancy, we imported our word for the noble title from French, which in turn got it from the Latin word “princeps,” which also literally means “first.”

Anyway, I’m pointing this out mostly because of Jughaid’s “furst” in panel two, which is a prime example of the eye dialect used in this strip, designed to make the characters look like they’re speaking non-standard English even though the difference between “furst” and how anyone would pronounce “first” is negligible. And honestly, I’d like to believe that Jughaid is announcing that the Holy Roman Emperor had invested him in a small alpine principality with the status of imperial immediacy, and that he’ll be leaving the Holler behind to take possession of his new realm post-haste.

I woman I dated briefly years ago once said that it always made her cringe to see a couple both sitting on the same side of a table at a restaurant because she took it as a sign that the passion had gone out of their relationship, and while I definitely think that’s a sweeping overgeneralization, I admit I always think about it whenever I see people sitting like that. Anyway, I wonder what she’d think about a couple who’s sitting together on one side of the table at a restaurant and also one of them has fallen asleep face first onto their plate.

Good news, everyone! Mike “The Mayor” has resigned himself to having his life destroyed for no good reason and has now come on down to see his old friends continue to play team sports, like he used to do. Anyway, would it be an appropriate response if he just whipped out a butter knife and started stabbling everyone to death with it? Well, no, no it wouldn’t. But would it work as narrative? Yeah, sure, probably. 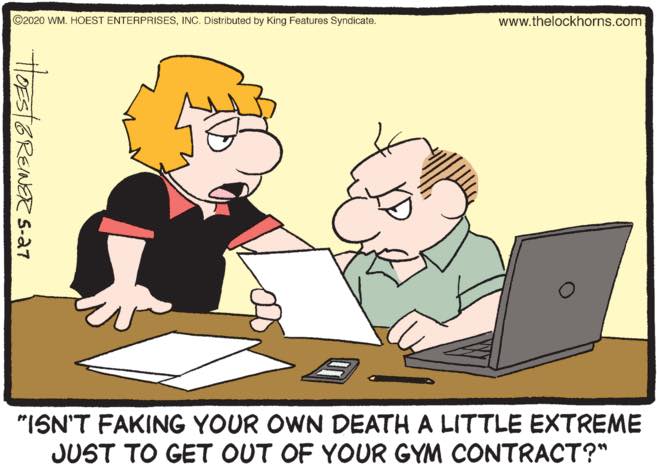 I know this isn’t the intended reading, but I am absolutely cackling at the thought of Leroy diligently printing out the “How To Fake Your Own Death” WikiHow article, which he’s now studying with more determination than we’ve ever seen him demonstrate in his entire life to this point.

“Well, of course, Mark, that’s understandable. But we’re not doing another camping trip for a couple of months. Maybe in the fall you might want to–” 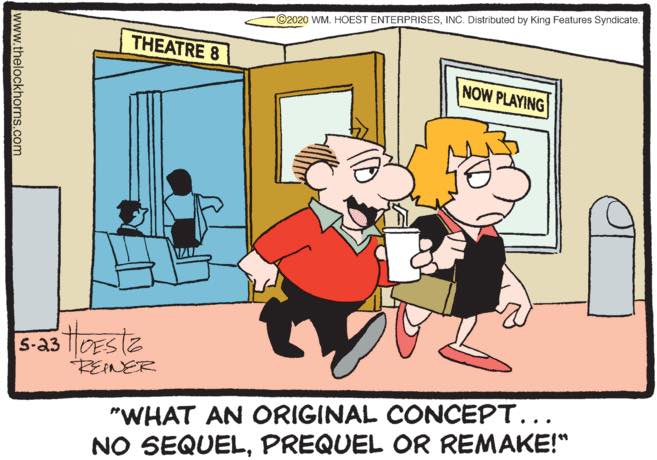 Well, the online discourse that erupted after Martin Scorsese declared that Marvel movies aren’t cinema a few months ago has mostly died down, but Leroy? Leroy is ready to fan the flames again. Watch out, film Twitter!

“I can’t really explain it, but when I got to the airport in Santa Royale, the city where I grew up and where I go to college, I really felt like I was home! Probably because I live here, I guess. Oh, also Jared was there to drive me back to the condo or whatever.”

Sure, Amazon has cut out the middelman between publishers and readers, turning books into a low-cost mass commodity, but there’s still a space for true aficionados to browse carefully curated collections of fine novels, like [squints] John Grisham’s latest legal thriller, Camino Winds! Only the personal touch of a true bibliophile can connect you with that sort of enriching literature!

Hmm, Truck looks a little dubious about this offer, doesn’t he? He knows that most of his fans are middle-aged dudes in loud print shirts who obsess over the distinctions between similar musical genres like Buck. Do we really want them gathering together, in “clubs,” and starting to realize their power and numbers? Sure, it would help Truck financially … but at what cost? 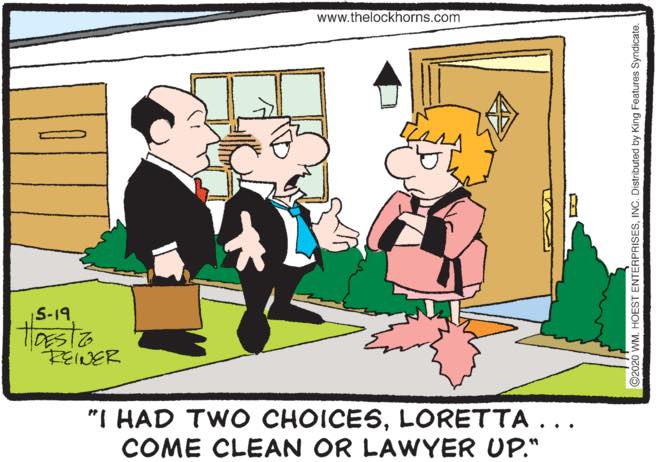 Good news, everybody! The Lockhorns are getting divorced!